Without its bridges, Osaka would have no story. The water city of Osaka supported by the culture of its bridges. 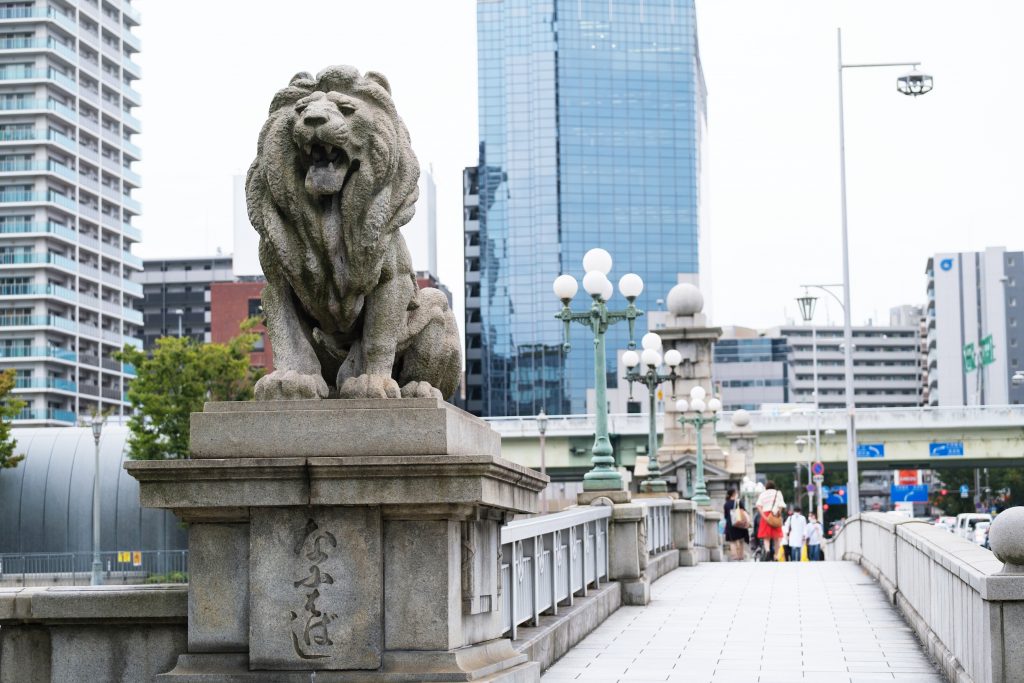 Osaka is a water city. In the olden days it was called “Naniwatsu” and was a base for overseas trade. Toyotomi Hideyoshi, founder of Osaka Castle, dug canals over which, as well as over the mesh-like expanse of rivers, spanned around 200 bridges, so that in the Edo Period it was even known as “Eight Hundred and Eight Bridges”. Today, many place names remain that have taken their names from bridges – Shinsaibashi, Tenmabashi and Yotsubashi, for example – telling of the way that Osaka developed alongside its rivers and bridges. Here we will introduce three bridges remaining today that have supported the prosperity of the “Nation’s Kitchen (Osaka)”

One of the representative bridges of Osaka, it is a bridge of a total length of 189.7m spanning across two rivers, Tosabori River and Dojima River. Due to its decoration with four lion statues, it has become familiar by the nickname Lion Bridge. It was built in the Edo Period, and was moved to its present location in 1912. Its majestic form is counted among the Three Great Bridges of Naniwa (Osaka), alongside Tenjin Bridge and Tenma Bridge.

Osaka, revered by the name “Eight Hundred and Eight Bridges”, in fact, had only 12 official bridges provided and managed by the Edo Shogunate. The rest were town-owned bridges built by the townspeople. Even Yodoya Bridge was a bridge built by the wealthy Edo-Period merchant, Yodoya. In 1935, the bridge was rebuilt in a sturdy design of reinforced concrete. In 2008, it was designated a national Important Cultural Property.

This is the biggest amusement area in Osaka Minami, familiar by the sight of its Glico hoarding. It was a town-owned bridge that the townspeople built at the time when Yasui Doton dug the Dotonbori canal in the Edo Period. It bustled with activity when all the playhouses of Osaka collected here, including Kabuki playhouses and the Takemoto Theater and Toyotake Theater of Ningyo Joruri puppet plays. In 2007 it was replaced with the form it takes today of a reinforced concrete structure measuring a total of 26m in length, but it remains the symbol of “eat till you drop” Dotonbori.

The “Umekita 2nd Project” too, opening in the summer of 2024, will include a symbolic bridge. Its name will be “Hirameki Bridge” (tentative name). This bridge connecting north and south parks in the center of the town will be a three-dimensional pedestrian space at a height of 6-8m, commanding a view of the park and roadway. It also connects to the walking trail “Hirameki trail” that winds its way through the entire site, so that people can enjoy a walk through the whole town.
“From this floating walkway, you can look down on the park, pass through the trees, and savor the experience of being one with the greenery. A roadway passes right through the center between the south area and north area of the site, and over the road crosses the ‘Hirameki Bridge’ in a gentle arch with a total span of around 60m”, says Mr. Takahiro Oka of Nikken Sekkei which is taking part in the park design.

The “Nigiwai Street” road crossing the center of the town east to west is “designed as a space that can be used as one plaza by uniting with both sides of the park as a shared street where periodic events can be held, and planted with Japanese zelcova and featuring structures to create points of interest.” In addition, a deck will link the south area with JR Osaka Station, as well as the north area with Grand Front Osaka, enabling a circular walk around the whole of Umekita. “Between Grand Front Osaka and Umekita 2nd Project District will stretch an avenue of Gingko trees, that will become a symbol street of Osaka. In the fall, the street will become a beautiful yellow color, which can also be viewed from the deck that runs above it” (Mr. Oka). “The bridges and streets in this town are not simply there to conduct traffic, but have been designed with their function as public space, where people enjoy the act of walking and the scenery of the park and town.”
History tells us that bridges are not just there for crossing back and forth, but hold various stories such as of people at rest, chance encounters, and the admiration of scenery. In the same way as the bridges of Osaka since olden times, a symbolic and beloved bridge will be born.