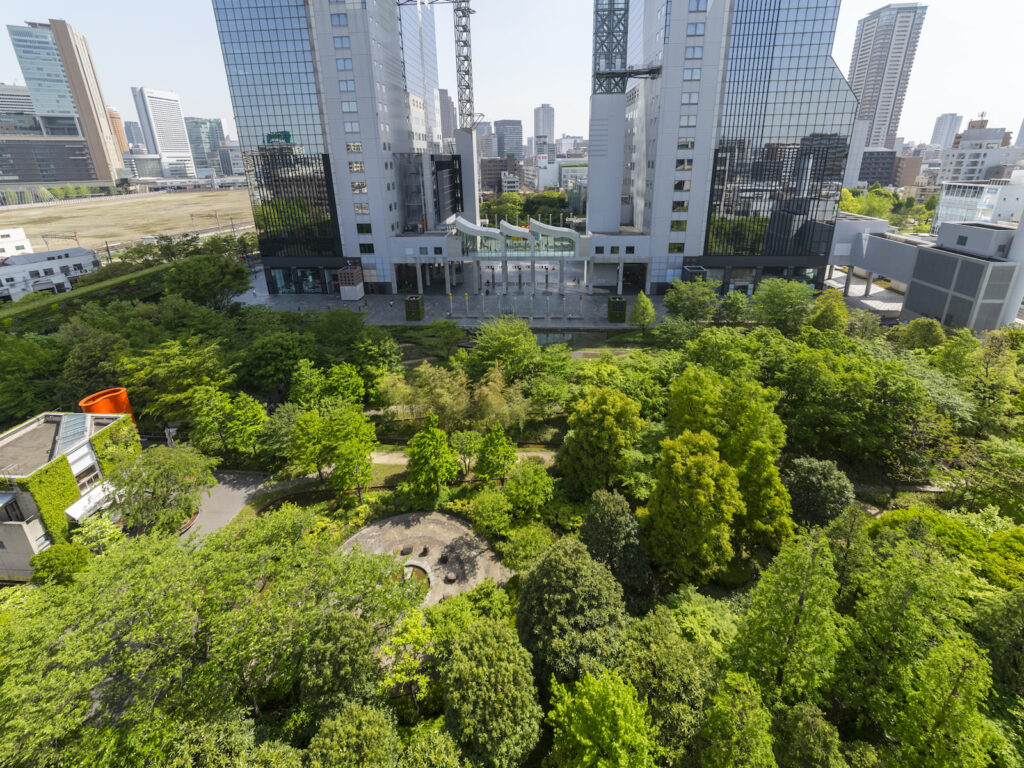 One of the goals raised by Osaka Prefecture for realizing the SDGs is “coexistence of all life”. Over 8,700 species of diverse creatures live in Osaka, each with their own established ecosystem, in every environment, including forests, woodlands, rivers, the sea, and cities. However, with developments such as population growth and an increase in urban functions, issues of deteriorating ecological functioning and insufficient greenery have now emerged. What kind of urban scene is required to facilitate coexistence with this rich ecosystem?

Even at the central city area around Osaka Station, the largest rail terminal in western Japan, there is a space for greening that follows the new approach of taking ecosystems into consideration, rather than simply lining the streets with trees, as was the traditional greening method. This space, known as “Shin-Satoyama”, is a manmade ecosystem network that lies in Shin Umeda City. The nature-rich “Shin-Satoyama” is a pioneering 8,000-square meter woodland space, actively involved in biodiversity conservation, enabling coexistence for living creatures in the city. At present, as many as 3,700 deciduous and evergreen trees of 94 different species have been planted, which are visited by 40-50 types of bird. Three years after its opening, the sparrowhawk—which is at the top of the ecological pyramid—flew in, and in 2013, it was confirmed that a Japanese night heron, an extremely rare bird of which only around 1,000 survive in the world, roosted there for approximately one and a half months.

“In 2006, the flower meadow centering on world flowers on the north side of Umeda Sky Building in Shin Umeda City was renewed as ‘Shin-Satoyama’, a space that shows consideration for ecosystems and focuses mainly on tree varieties indigenous to Japan. In order to create green places in the city following the plan of “Five Trees”*1 proposed in our project, we aimed for a sustainable green space as if rebuilding our connection with living creatures”, says Mr. Masaaki Sasaki, who is also a tree surgeon at Sekisui House, and who was involved in the renovation.

“For one caterpillar to become a butterfly, it needs the equivalent of 40 leaves of an orange tree. However, one Japanese tit will prey on roughly 100,000 insects over a year. So, as long as one bird flies in, we can control the insects. And there is no shortage of food for these feathered visitors; the Japanese night heron that visited “Shin-Satoyama” caught 137 worms in one day. The reason for the abundance of worms, which enrich the soil, is that we use no pesticides or chemical fertilizers, so the soil is soft from the working of useful bacteria and microorganisms in the ground. In this way, we have worked to use as much as possible the power of living creatures for control, without reliance on chemicals, bringing out the original strength of life in plants while keeping human involvement to a minimum. ‘How to go about creating greenery as a base for an ecosystem’ was an extremely important issue”.

According to Fact-finding Surveys*2, the percentage of green area (Green Coverage Ratio) is 24.2% in the Tokyo Metropolitan area and 21.5% in Nagoya City, while in Osaka City it is roughly 15.8%, which means it has little greenery when compared to the country as a whole. However, the landform that is typical of Osaka has merits for living creatures, says Mr. Sasaki.
“Osaka has rivers that make up around 10% of its area; therefore, more than anything it can be called a water city. The distance from Osaka Bay to Mt. Ikoma is just 20 km, so the distance from sea to mountain is short, with rivers connecting as far as the surrounding mountain ranges. For migrating birds, the rivers are markers along their journey, and the abundant greenery also offers somewhere to hide from predators. This prominent ecological network, providing a route for living creatures to pass, is a distinctive feature of Osaka. Therefore, as far as the Umekita 2nd Project is concerned, we predict that birdlife using the neighboring “Shin-Satoyama” will also fly into the Umekita 2nd Project park, so we expect that it won’t take long for the greenery of the park to mature and the ecosystem to be complete”.

Umekita 2nd Project is also aiming for a new city that is blended with MIDORI (greenery) in a way never seen before. The park, which occupies about half of the site area, will become a park that encourages diversity in the creatures living in Osaka. Mr. Yoshiaki Komatsu, involved in the park design as a landscape architect from Nikken Sekkei, as well as being a tree surgeon, spoke about the grand design of the new Urban Park.

“The area that will give birth to Umekita 2nd Project’s Urban Park lies within a 5 km-range of Osaka Castle, has the Yodogawa River 1 km to the north, and is as near as 200 m from “Shin-Satoyama”. From the point of view of constructing an ecological network connecting Osaka Castle to the Yodogawa River, it is an extremely important place. The planting plan for the park will focus on indigenous species, as with “Shin-Satoyama”. The park, divided into north and south, has a hill rising to about 3 m, and we are considering planting plans that make use of the height difference. In the low area, we plan to plant mainly potential natural vegetation that originally grew in this area, and tree varieties that can be grown near water. On the hill, we will plant many varieties of cherry, linking the north and south parks, as well as oaks that produce acorns and other tree varieties that can be found on the Hokusetsu and Rokko mountain ranges. Also, the Entry Garden that will be created in the south area will be planted with nearly 100 varieties of plants loved since olden times in Japan—such as hydrangea, rhododendron, azalea—with consideration for the color scheme. Something will be in flower no matter the time of year, providing those who visit with a sense of Japan’s four seasons”.
The focus will not only be on plants however; consideration will also be taken for the birds flying in and the creatures living in the park.
“As a night-time measure, we will shine lights downwards so as not to cause an adverse effect on birds flying across the sky, and will make sure light does not fall on the pond, which could attract insects. In addition, the pond in the north park will be given various depths, from deep spots to shallows, to allow dragonflies and small fish to live there. We will also create an environment in which the features of waterside, grassland, and woodland exist as a set.”

“The theme is a base with ‘MIDORI (greenery)’ and ‘Innovation’ in harmony, but first we must firmly establish the field of MIDORI with all its charm in the center of Osaka, and create various places for experiencing the four seasons characteristic of Japan, with cherry blossoms in spring and autumn leaves in the fall. People will then naturally gather and communicate, which may bring about innovation”, says Mr. Komatsu.
Lastly, Mr. Sasaki spoke about the potential hidden within greenery.
“We cannot overlook the powerful influence that greenery has over people’s creativity. GAFA*3 and other leading US IT companies noticed that people exhibit creativity in a space rich in greenery, so have moved their head offices to the suburbs and work in spaces overflowing with greenery. Not only does a green environment heal fatigue and stress, but results of investigation are beginning to reveal that contact with greenery improves the creativity and productivity that fuel innovation.
There is much expectation surrounding the potential of MIDORI (greenery) as an ecological network that connects the living creatures of Osaka, and as an opportunity to unleash creativity.

*1 Five Trees: from 2001, Sekisui House has been carrying out a garden-building greening project under the concept “With trees indigenous to Japan: three for the birds and two for the butterflies”. The project selects trees to suit the weather and climate of the region when making gardens for houses, restoring the original ecosystem of the land.

*3 GAFA: general term for the four leading US IT companies Google, Amazon, Facebook, and Apple.