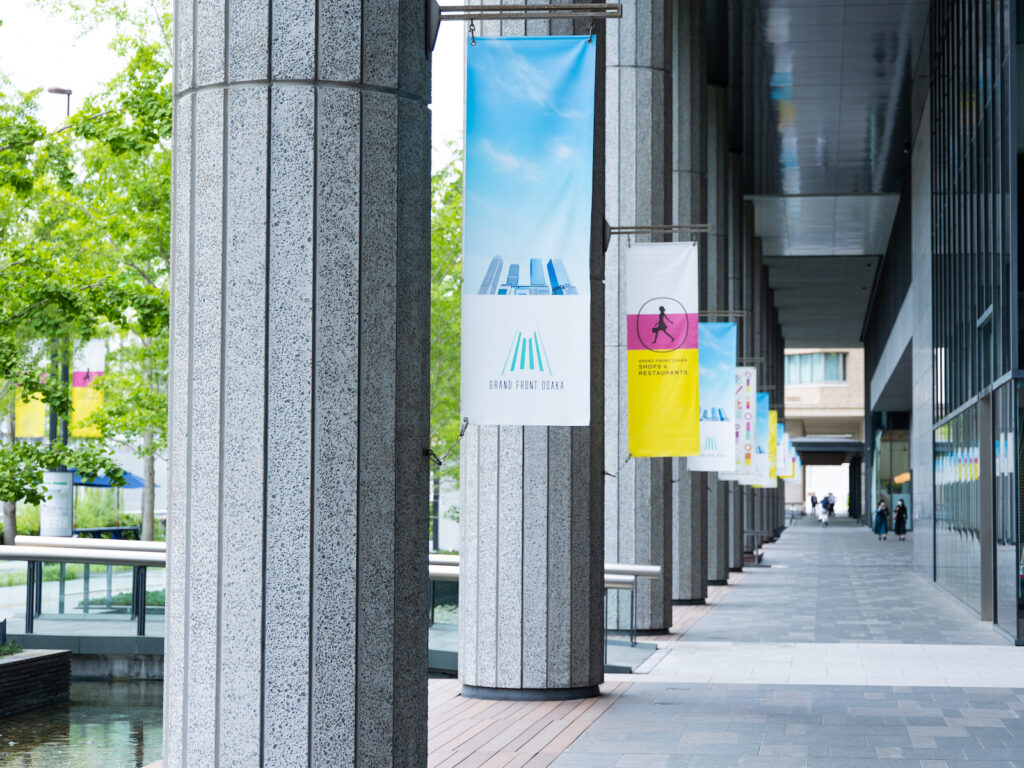 Area management refers to an urban development that moves beyond mere development in order to improve the value and appeal of the town itself, with residents and developers working together to develop the town, to maintain and manage it, and to ensure its growth. Here, we take a look at the area management being undertaken in the Umeda district of Osaka, which contains the largest rail terminal in western Japan.

What kind of impression do you have of area management? There are many area management organizations active in Osaka. Government and the private sector are working together to establish new systems and utilize existing frameworks to revitalize urban areas. After large-scale development is completed, these urban areas will continue to grow more attractive.

In the Umekita area, the area management of the Grand Front Osaka complex is being carried out by the general incorporated association Grand Front Osaka TMO (referred to below as TMO).
Says Mr. Kentaro Masui, Director of TMO, “Our vision for Grand Front Osaka is as an urban area where the encounter with a diversity of people and a variety of stimulation will nurture new ideas and innovation. As well as various facilities such as offices, shops, restaurants, hotels, residences, and Knowledge Capital, it is also home to a large number of public spaces such as Umekita Plaza and the Seseragi-no-Michi outdoor path. Of course, its functional spaces such as offices and hotels are appealing, but we are managing this overall district, including its public spaces, so as to encourage the involvement of both visitors and local workers, enhancing the value of Grand Front Osaka, as well as collaborating with adjacent districts to make the entire Umekita area even more appealing. At TMO, our mission is to create a lively, vibrant urban area that you’ll want to visit every day.”

TMO consists of a Promotions Department, in charge of advertising and events utilizing public spaces such as Umekita Plaza and Knowledge Plaza, and an Urban Development Department that manages new urban spaces together with the local community in a public–private partnership.
“The Promotions Department manages all the flag and banner advertising displayed at the Grand Front Osaka complex. This contributes greatly not only to client support and overall management of site operations, but also lends the area more vibrancy. We have solid guidelines for reviewing advertising—in order to maintain the high-quality townscape of Grand Front Osaka, we ask advertisers to refrain from using flashy fluorescent colors that might clash visually, as well as any advertising containing violent or destructive imagery. To ensure a high-quality townscape, a committee comprising academic experts, the government, and the private sector meets once a year to confirm the best direction to move forward. In addition, with the installation of benches in Umekita Plaza and umbrellas and tables on the west side of the North Building, we provide the space and time for visitors to relax, in addition to enjoying the restaurants. The Urban Development Department is in charge of the townscape guidelines and the benches, but our entire office works together to create a pleasant space.”

There’s also UMEGLE, which has been in operation since the area opened; it provides transportation services such as buses that travel around 12 stops in the Umeda area, as well as bicycles for hire.
“One of the Urban Development Department projects, UMEGLE covers three areas—buses, bicycle hire, and parking. Seeking to curb the influx of automobiles into the town center, it works to promote an enjoyable, pedestrian-centered urban development. People can park their cars and easily switch to buses and bicycles instead. UMEGLE is all about getting around Umeda.”

Area management can be described as management of every single aspect.
“I think the most visible of all our TMO activities are the events we’ve planned at Grand Front Osaka. One example is the Umekita Yukata Festival which is held each summer at Umekita Plaza, which directly connects to Osaka Station. It features a platform set up in the plaza, with beating drums, and traditional summer dances performed with local residents in a circle. We don’t plan and manage it ourselves; it’s done in conjunction with people in the neighborhood. At the moment, it’s been canceled due to COVID-19, but at the beach volleyball tournament with white sand strewn about the plaza, you can forget that you’re right next to Osaka Station. The grand staircase is used as seating, and the event is popular because it’s so unusual for spectators to be sitting there. The ice skating event called “Umeda ★ Ice Rink Tsurun-Tsurun” has become a winter tradition. And coinciding with the official sumo tournament in March, which is usually held in Osaka, the Umekita Tournament is held at Grand Front Osaka, with a sumo wrestling ring set up in the center of Knowledge Plaza on the first floor of the North Building to allow visitors to see the powerful moves of the wrestlers up close and feel they are at a regular tournament.” Visitors can thus enjoy events held in every season­­––indeed recently people say that if an event is to be held in the Kansai region, it should be held at Grand Front Osaka.

In addition, the new ART SCRAMBLE project commenced in spring 2021 to support up-and-coming artists with a connection to the Kansai region, and to help cultivate and make wider known culture in which Japan can take pride. The first such event features guest curator Noboru Tsubaki, a contemporary artist and professor at Kyoto University of the Arts, who is exhibiting works by three artists at Grand Front Osaka.
“We will have up-and-coming artists in Kansai create artworks for us, with those works being rotated after a certain period of time. This project was launched to support artists while also providing opportunities for people visiting Grand Front Osaka to encounter art. It’s my hope that young people encountering art will one day be in a position to create their own art, and if they say, ‘The starting point for my art was Grand Front Osaka,’ then I’ll be very happy. It’s my dream that this virtuous cycle would continue on for a long time,” says TMO Director Mr. Masui, envisioning a happy future.

The popular TED HYBER sculpture at Umekita Plaza is also one of TMO’s initiatives: “When we invited TED HYBER for the fifth anniversary events, it became very popular, and soon secured a permanent position in the square’s water feature. TED changes costume every season, always bringing joy.”
Not only art, the MUSIC BUSKER IN UMEKITA event, presented in conjunction with the FM-802 radio station, seeks to discover and support musicians spreading their wings in the world. That’s Umekita, where you can always support someone and someone will always support you.

Aside from its independent activities, TMO also undertakes initiatives in conjunction with the Umeda Area Management Alliance.
The Umeda Area Management Alliance was launched in November 2009 by the West Japan Railway Company, Hankyu Corporation, Hanshin Electric Railway, and Grand Front Osaka TMO, with Osaka Metro joining from April 2021. These five entities work together to further enhance the appeal of the Umeda area by undertaking activities such as disaster readiness and beautification.

“The year 2023 will mark the tenth anniversary of the opening of the Grand Front Osaka complex. The advance opening of Umekita 2nd Project is scheduled for the summer of 2024, the following year, and the Osaka Kansai Expo will be held in 2025. We look forward to working in conjunction with the Umekita 2nd Project, centered on a large urban park, to enhance the attractiveness of the Umekita area. Beyond this, we will continue to work toward urban development together with other area management organizations.”
Now that the Umekita 2nd Project is nearing completion, the urban development of Umeda has become more important than ever, making area management essential in launching the appeal of Umeda to the wider world.