A fun way of enjoying sports found at urban parks 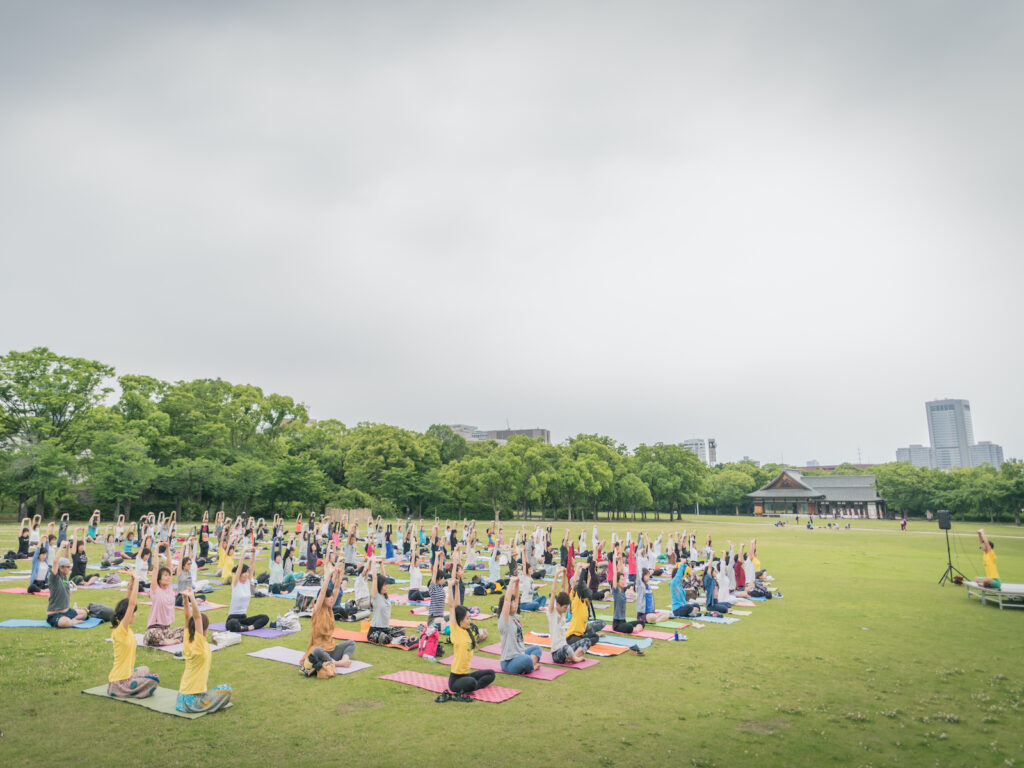 Not just for walking and relaxation, urban parks are increasingly responding to diverse needs and changing usage. Here we look at new efforts to enable people to more easily participate in sports, introducing three parks where visitors can enjoy being physically active, including the Osaka Castle Park, which innovated in 2015 as Japan’s first Park Management Organization focusing on tourism.

Osaka Castle Park occupies a tenth of the total area of the Osaka municipal parks. The site of 105.6 hectares has a 3.9 km run along the outer moat and 2.9 and 3.5 km courses within the park, so that users can select the course that best suits their needs. It is a popular spot for running while enjoying the nature of the four seasons in the midst of a rich history––Osaka Castle itself dates back to the sixteenth century. In 2017, Running Base Osaka Castle opened. Only a two-minute walk from Osaka Castle Park Station on the JR Osaka Loop Line, it provides lockers and shower rooms, and its rental of running wear and shoes makes casual running easy to do.

Ogimachi Park’s history goes back to its opening in 1923. Adjacent to Kids Plaza Osaka, a children’s museum for playing and learning, the 7.3-hectare site enjoys such amenities as indoor and outdoor pools, large-scale play equipment, and a playing field. Since the Tenjinbashi-suji shopping street is nearby, a variety of visitors gather here, including local residents, tourists, and office workers. A wide range of people can be seen enjoying their favorite sporting activity: children on the playground, parents and children playing catch ball on the playing field, runners running in the large open space.

The vast 65.7-hectare site of Nagai Park boasts sports facilities such as pro soccer team Cerezo Osaka’s home grounds, Yanmar Stadium Nagai and Yodoko Cherry Blossoms Stadium, and attracts many sports fans. A special project to promote health, Nagai pakuretchi, was started in August 2021 as a collaboration of three organizations: Tokyu Sports Oasis, the designated administrator of the park Wakuwaku Park Create, and Cerezo Osaka. This project lets one access training instructions using a particular bench or piece of playground equipment, via the training app WEBGYM provided by Tokyu Sports Oasis, by simply scanning the QR code located on it with one’s smartphone.

Mr. Shunichi Funabashi, of the construction and urban development company the Obayashi Corporation, has been involved in Umekita since 2003. He worked on operational aspects  for the earlier development district Grand Front Osaka, which opened in 2013, and is now involved in the Umekita 2nd Project.

“In the earlier development, we thought about urban development from the perspective of the Knowledge Capital complex and town management. We created the community platform Socio for a citizen-led, participatory urban development which uses the ideas and networks of users for vitalization of the town in practical ways. This helps all citizens to use the open space, and supports group activities that contribute to local society. We worked on lowering the threshold for sport and on facilitating it within everyday life. A kids’ sports Socio was started at the time of opening, with Beijing Olympics bronze medalist Mr. Nobuharu Asahara as sub-captain holding running classes for children. Former Japanese national team players from the Vissel Kobe pro soccer team also hold ball yoga classes to prevent athletic injuries along with yoga instructors. We provide the venue for these, which are pro bono activities* contributing to society by making use of the experience and skills of professionals.”

Mr. Shunichi Funabashi talked about the future of sport, saying, “We need to recapture the meaning of sport itself.” The concept of sport was introduced to Japan from Europe and America after the Meiji Restoration of 1868. There was a strong sense of training, competing and winning in physical training and in discipline of the mind and body. In the Second Sport Basic Plan set by the Japan Sports Agency, sport is defined as “Something that brings about spiritual fulfilment in response to the instinctive human need to move the body.”

“The word ‘sport’ originally meant pastime, diversion. I think it’s important to go back to those roots once more. In the commercialization of sports context of ‘doing, watching, supporting’ sports, ‘doing’ focuses on facilities and equipment, ‘watching’ is spectating at pro games and broadcasts, and ‘supporting’ is volunteer activities for running the Olympics and the like, so that I feel that the business aspect has intensified. I think we should start to focus more on sport as having fun exercising the body within everyday life and bringing spiritual satisfaction, rather than the competitive sport to date that looks ultimately to top athletes.

Mr. Shunichi Funabashi notes that a park can be an effective place for exercising the body on a daily basis. However, there seem to be problems with doing competitive sports in parks.

“Games like soccer and futsal need a court. Competitive sports sometimes take over a location for a set period of time. Places like Ogimachi Park, however, are used in an ideal way. Several children doing competitive sports regularly practice things like kick-ups in a small area. To the side of them, volleyball is being played, or parents and children are playing badminton. Rather than monopolizing one section of the park, there is a tacit agreement to take care when kicking a ball as there are children there too. The management’s view is to allow everyone who gathers in the park to make the rules rather than prohibiting all playing with balls there, and scenes of that ideal can be witnessed at Ogimachi Park.”

He also has strong expectations for the urban park in the Umekita 2nd Project that will be opening in the summer of 2024.
“The ‘doing, watching, supporting’ that I mentioned earlier doesn’t have to be performances by top athletes; someone passing by seeing children ‘doing’ futsal in the park is also ‘watching.’ Likewise, preparing an environment in the park so children can play to their heart’s content is ‘supporting’ too. I want to continue putting my energy into supporting such community participation. From such places, I expect new sports and rules to be born, and the concept of sport to continue to widen.”

He continues on the possibilities of widening a new concept of sports crossed with elements of innovation in the Umekita 2nd Project urban park, which has the theme of “MIDORI (greenery) and innovation in harmony.”

“We are investigating data utilization aimed at an urban development promoting well-being. For example, from the viewpoint of health, we first need to grasp what kind of daily life a person is leading from his or her lifelong of exercise, eating, rest, etc. By recommending the exercise necessary for that person based on their lifestyle, we think we can improve their living habits. We anticipate that office workers in the city could find themselves being more physically active, and if they receive a fresh energy thereby, that would also contribute to an improvement in quality of life. It would be great if we could create services, facilities and rules for that.”

Technology now enables the linking of sport with taking care of one’s health. Through its urban park, the face of the Umekita 2nd Project new to emerge, we should be able to glimpse what parks will be like in the future.

*Pro bono activities comes from the Latin “Pro Bono Publico (for the public good),” and means activities contributing to society provided by volunteers who have specialist skills and experience gained at work.