An infrastructure company contributing to urban development: Creating the future with the local community 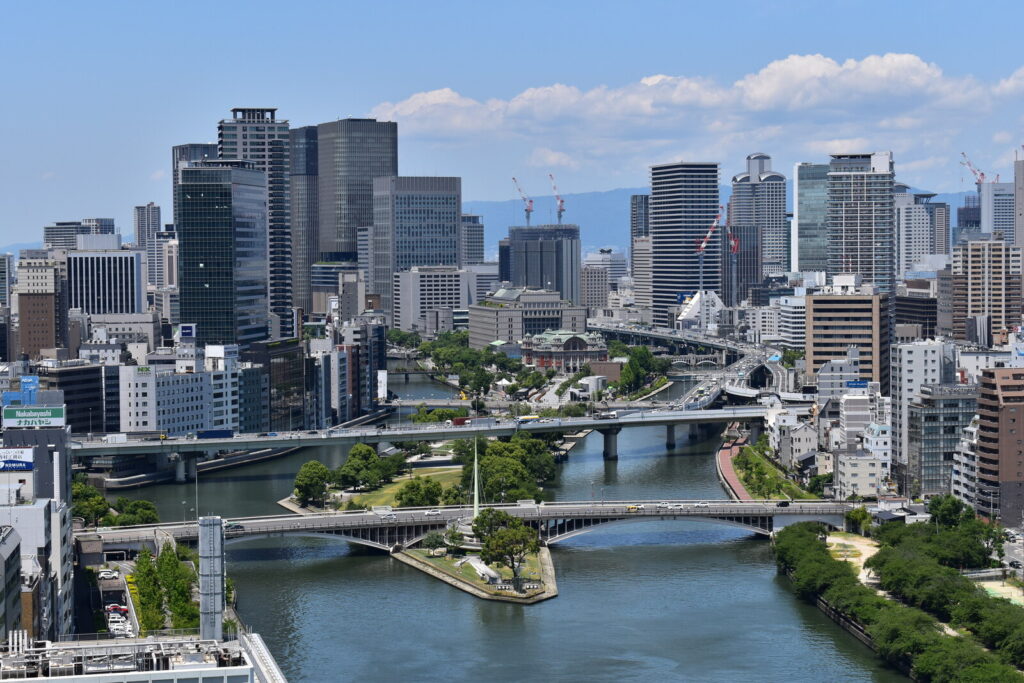 Kansai Electric Power, as a key infrastructure company, has worked closely with the local community in developing and supporting the local area. I spoke to Ms. Noriko Takamiya of the Customer Solution Division at the Kansai Electric Power Co., Inc., about urban development linked to local sustainable development in this age of new energy. One such example is the local heating and cooling system using river water, especially suited to Nakanoshima, an island in the city of Osaka that is surrounded by two rivers: the Dojima and Tosabori rivers.

Kansai Electric Power has been active in the urban development of Nakanoshima, home to the company’s main office, based on the motto “Trusted by the local community, together achieving sustainable growth and development.” As a head member of the Nakanoshima future city planning council, made up of 28 private companies, leaseholders, and other entities with ties to Nakanoshima, it has been active in improvements and disaster prevention in the Nakanoshima area, working in collaboration with government and private sectors to make a lively atmosphere.

“Originally, Nakanoshima was a business area, and after Osaka University moved away completely in 1993, it was almost completely dead at the weekends,” says Ms. Takamiya. “In recent years,however, public space and pedestrian decks have been installed with the reconstruction of public buildings, and a concentration of cultural and artistic facilities—Osaka Science Museum, the National Museum of Art, Osaka, the Nakanoshima Children’s Book Forest, and, opening in February this year, the Nakanoshima Museum of Art, Osaka—has given birth to a new flow of people. Residential blocks are being built, too, and gradually the number of local residents is increasing. In the near future, the International Hub for Healthcare Innovation will open in 2024 with cutting-edge healthcare based on regenerative medicine, as well as an integrated elementary and junior high school. Then, in 2031, a station is scheduled to open here on a new rail line, the Naniwasuji Line linking Kansai Airport, Umeda and Shin-Osaka. As development progresses, I look forward to a bustling town where many people will visit for the area’s diverse attractions,” she says, in anticipation of the redevelopment of Nakanoshima.

In 2021 experienced academics and administrators drew up a Nakanoshima local strategy plan to address these further environmental changes to Nakanoshima. “As an area management body, we do not hold power in concrete terms, but our proposal includes our wishes for the mid- to long-term urban development of Nakanoshima as a creative island fusing business, culture and nature. I hope it will serve as reference for those involved in future urban development projects in Nakanoshima when they are considering direction and urban design for the area.”

Nakanoshima is an island emblematic of the water city Osaka and not only is its waterfront space being reinvigorated, but use is also being made of its geographical position between two rivers. Kansai Electric group company Kanden Energy Solution Co. is introducing a local heating and cooling system tapping into the hitherto unused energy of river water.

For the quarter of a century since the initial conception, energy supply has been carried out in stages with the reconstruction of the high-rise clusters in Nakanoshima Blocks 2 and 3. Supply has also begun in the Block 4 area where the Nakanoshima Museum of Art, Osaka, opened this spring.

“In the present age, energy consumption and operational values have greatly changed from in the past. Previously, electric companies handled the entire process from generation to supply, generating energy in a suitable balance of hydropower, thermal power and nuclear power, and delivering it to customers through a grid of power lines. These days, electricity can be produced from dispersed power sources like renewable energy, and electricity can be stored in storage batteries. You can choose where to buy it from and what weight you want to give to impact on the environment; there are also moves toward local energy production for local consumption. Electricity plays a role as a stable support of the changing scenes of everyday life, such as lighting, electric-powered devices, air conditioning and information technology. And with these changes and technological innovations, the role of energy in urban development—environmental, disaster prevention and smart technology—has become ever greater.”

In the energy infrastructure of Umekita 2nd Project, too, which will see its advance opening in the summer of 2024, there are plans to introduce cutting-edge environmental technology and resource recycling. In advance of this work, in 2014, collaboration began among three companies—Kansai Electric Power, Osaka Gas and NTT West—with support from the Ministry of Land, Infrastructure, Transport and Tourism, on a lead project for an energy creation, storage and conservation model particularly suited to the city of Osaka.

“That was before the Umekita 2nd Project urban development strategy of integration of “MIDORI” (green) and “Innovation”was conceived, and at the time, eight years ago, not so much attention was being paid to decarbonization and DX (digital transformation). However, the three companies pooled their knowledge to consider what a cutting-edge model for a next-generation energy system for the Umekita 2nd Project, then still in its early stages, would look like. They investigated and settled on untapped energy, still in the experimental stages, and information and communications technology (ICT). These were then reflected in their urban development strategy, which will adopt such measures as large-scale aquifer thermal storage—the first in Japan, biogas power generation and wastewater heat use. I feel that the real pleasure of an infrastructure company is the opportunity to be involved in urban development from an early stage.”

This year, that model has been adopted in the Sustainable Building Promotion Program of the Ministry of Land, Infrastructure, Transport and Tourism. An investigation group has been set up relating to energy management, including energy flexibility between town blocks at peak times and in emergencies, with multiple providers and multiple energy systems. Planning will also take place to create mechanisms for effective and sustainable usage after the opening.

With the diversification of lifestyles and values has come greater choice over energy, technology and services. Ms. Takamiya feels the time has come to offer the type of energy optimal for particular customers and local communities. “There are increased opportunities, thanks to diversification, to propose what is most suited and ideal for customers and local communities, and to make a contribution to urban development in terms of the energy infrastructure. By responding to various needs like new lifestyles, zero carbon policy and increased resilience, I hope we can be of help in continuing to offer new values, and assisting in the future of local communities and in sustainable development. The Umekita 2nd Project, awaiting its opening in 2024, has gathered together the best elements of urban development, incorporating the latest technology and the various ideas and know-how of those involved in urban development, including people in the area of energy infrastructure. Such elements coming together and reacting act as a catalyst for the birth of new things, and I look forward to a cutting-edge town that is quick to keep on changing along with the times.

An independent energy infrastructure with a reduced environmental burden, in a new townscape centered on an urban park rich in natural greenery, will surely contribute to the further creation of a sustainable society.