Designing a Park for Osaka’s Future 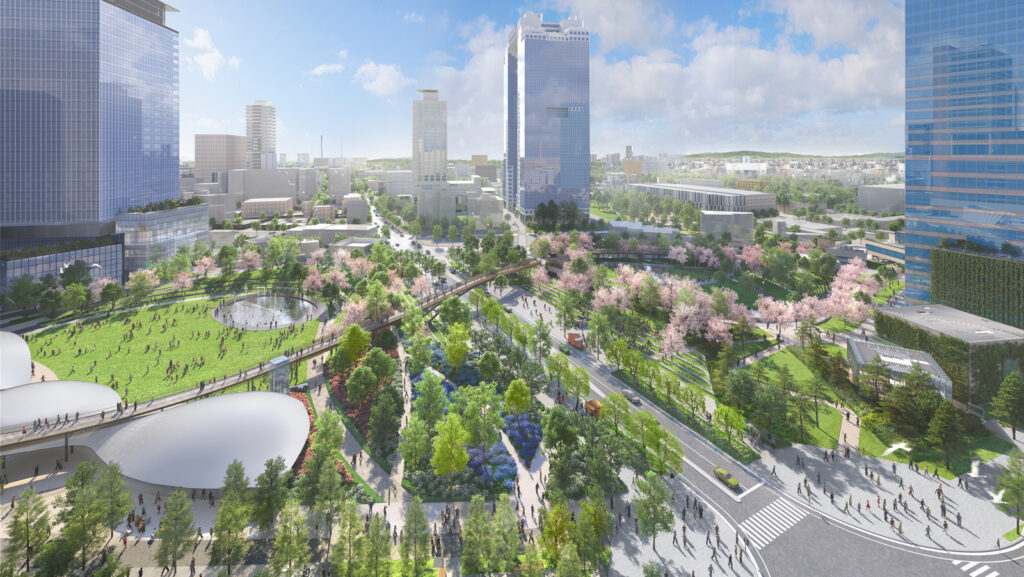 The Umekita 2nd Project is a major urban redevelopment project in Osaka, with a phased opening beginning in the summer of 2024. Located north of Osaka Station, half of the site (approximately 45,000 square meters) will be an urban park designed by the global landscape design firms GGN and Nikken Sekkei. To learn more about this extensive park abundant in Midori, we talked with both firms and the Hankyu Hanshin Properties Corporation, one of the developers advancing the project.

Ms. Makie Suzuki of GGN, the lead design firm for the park, recalls the time when she and lead designer Ms. Kathryn Gustafson toured the city of Osaka.
“Seeing the vitality of the vendors in the arcade shopping areas, Kathryn was captivated by the unique nature of Osaka. Also, as we investigated the history of the city, we encountered even more the significance of such traders. Osaka is famous for its ‘Eight Hundred and Eight Bridges,’ and the vitality with which the normal citizens built many of the bridges themselves can be sensed even today.”

GGN thoroughly researched elements such as history, culture, geology, and local ecology to find the best design for the project’s particular site. When creating the park’s design concept, they said they were particularly drawn to the presence of water in Osaka.

“As its nickname ‘City of Water’ suggests, this heritage can be found everywhere in Osaka even today, with the ubiquity of water demonstrated by the Yodogawa River with its many faces and Fukushima Ward with its legacy of canals. The Umekita 2nd Project grounds are also located in an area with a deep connection with water: the nearby Tsunashikiten Shrine is known as a site where the demoted court official Sugawara no Michizane stopped his boat in the year 901 when he caught sight of beautiful red plum blossoms there. For this reason, we used the concept of ‘Osaka’s authentic rich and fertile ground’ as our design inspiration.”

Ms. Suzuki says it was difficult to escape the impression that this approximately 45,000-square-meter open space is divided into two distinct areas—north and south—by Osaka Station North Route 1.

“Designing a conceptually unified park from a space that is physically separated into north and south areas by a road was a request dating back to the competition. One of our responses was a rolling landform that straddles and crosses over the two spaces. South Park opens onto the Grand Front Osaka complex, Umekita Plaza, and the JR Osaka Station. Similarly, we tried strengthening North Park’s connection with the adjacent neighborhoods by embracing the Umeda Sky Building side. This site is long in the north-south direction, but you can see the full breadth of the space along the shorter east-west axis. We plan to enlarge the sense of scale by creating a three-dimensional landscape. It’s a bit of a trick that uses people’s imaginations to give larger readings of the space.”

The proposed park design creates two main open spaces, Umekita Grove in the north and Reflection Lawn in the south. There will also be a space called Step Plaza that engages the road itself as a part of the space.

“Rather than treating the road as something that divides the park into two, we considered treating it as part of this Step Plaza itself. The slope has been modeled into the form of a staircase, and the basin-shaped space on the opposite side can accommodate a stage, so that it can also be used as a venue for events.”

Also, as we took Osaka’s deep connection to water as an inspiration, Umekita Grove will have various water features, such as a restful pond and waterfall.

“We sculpted the North Park entry water feature with inspiration derived from historic landforms. Of course, we used water wherever possible, but where we physically couldn’t, we selected a planting palette to evoke the feeling of water and give a visual sense of it.”

Designing this urban park does not end at shaping the area, but includes a creativity in the plantings that will grace the park, too. Ms. Tomoko Hirayama of Nikken Sekkei which is in charge of the park design along with GGN, affirms the importance of the park as the place where you can sense the original characteristics of greenery in Umekita, Osaka, and Japanese geography and history as a whole, even though Osaka is currently known for having very little greenery.

“Since the park has an array of diverse features, such as hills, watersides, etc., we have planned plantings that fully complement them. To represent the satoyama vegetation found in hilly areas on the Uemachi Plateau and outskirts of Osaka and, in line with the concept of ‘Osaka Original Rich Moist Ground,’ we are incorporating a waterside planting of Celtis sinensis and Aphananthe aspera, which indicates the link with the Yodogawa River. In Entry Garden of South Park, Rhododendron species, Hydrangea species, and other flowers loved in Japan since olden times will provide an elaborate color scheme and year-long seasonality, so that whenever you visit, you can sense the beauty of the four seasons. As a city-center park, it is surrounded by closely packed high-rise buildings, so the issue emerges of how that will affect the living conditions for the plants. Therefore, we used technologies to simulate the sunlight conditions and the changes in wind patterns, etc. over a year, and reflected them in our plans.”

In addition to its plantings rooted in the ancient landscape of Osaka, and the selection of plants to give a sense of the season whenever you visit, as well as the use of scientific findings on the particular environment of parks in city centers, the park is full ingenuity that offers unparalled greenery. Another highlight of the Umekita 2nd Project urban park will be its transformation into a famous spot for cherry-blossom viewing.

“In making use of the landforms that are a special feature of this large park, another centerpiece of the plan is to create a new spot for cherry-blossom viewing in Osaka. We are planning a cherry-tree hill linking North and South Park. When you talk about cherry trees, most people think of the Cerasus × yedoensis, but here we are planning to introduce a variety of different cherry trees like Cerasus jamasakura, Cerasus itosakura, and Prunus speciosa for visitors to enjoy the beauty of the different tints of blossoms particular to each.”

“Although it is an area with a high water table, our plans aim at circulating water resources within the park as much as possible. In North Park, we will introduce gravel reservoirs and infiltration trenches to gradually filter rainwater into the soil. For the large lawn space in South Park, we are preparing a planting base that will allow for both permeability and water retention. Additionally, there are plans for both South and North Parks to store some of the rainwater and reuse it for irrigating the greenery. By limiting stormwater runoff to the surrounding area from the park, we plan to contribute to inland flood control. Also, utilizing rainwater will reduce the amount of tap water needed to run the park. Of course, the effect of leafy shade from the greenery and micro-atmospheric changes from the evaporation of the waterscapes, etc. will also help create cool spots in the city center.”

“Further, the park will be an important link in the ecological network in central Osaka,” Ms. Hirayama continues.

“It is within five kilometers of Osaka Castle Park, also around one kilometer from the Yodogawa River located to the north, and just nearby is Shin-Satoyama of Shin Umeda City. The Umekita 2nd Project is positioned to connect these sites. We expect it to become a new node for linking up the ecosystem in Osaka, where greenery is scarce. For that reason, we investigated what plants and living creatures are found in the Yodogawa River, Osaka Castle Park, and nearby places, and established which species of insects and birds could be expected to fly into Umekita, and that eventually determined specific planting plans. By achieving a balance between human use and an environment for sustaining living creatures through, for example, lighting plans considerate of the behavior of birds, we hope to make it a place that functions as a base for an ecological network. We are also discussing with the developers to continue monitoring the wildlife even after the park is completed.”

It is the role of the park facilities to add something extra on top of a park brimming with greenery where wild birds and insects gather. Mr. Kyo of Hankyu Hanshin Properties, which is collaborating on the Umekita 2nd Project, talked with us about the facilities to be installed in the park.

“The park’s facilities can largely be divided into three functions. One of the these is to attract crowds. In order to invite a large crowd, SANAA is designing a large-canopy event facility of around 120 meters in total length. In the event space below the canopy it will be possible to host gatherings such as commercial events and music festivals, usually difficult to achieve in typical public parks. The second is the ‘innovation function,’ exemplified by the Next Innovation Museum, whose design is being overseen by Mr. Tadao Ando. By locating the museum in an open space like a park visited by various types of people, we anticipate that it will offer companies and research organizations a point of contact with the general public, and innovation will be generated more easily.”

The last function is eating and drinking. There will be refreshment facilities dotted throughout, Mr. Kyo says, enveloped by the green of the park.

“Encompassing the space with greenery will enrich the time people spend in the park as they have a meal or relax in one of its cafes. There are diverse places within the park, so we are planning eating and drinking facilities to be fitted for each location, such as positioning a cafe near the entrance to enable a wide vista of the park, or a restaurant where you can have a meal while gazing at the waterfall.”

The Umekita 2nd Project’s urban park, being created through the collaboration of all parties, will begin its phased opening in the summer of 2024. Looking ahead two years in the future, Ms. Suzuki gave her thoughts on the park.
“Kathryn often says, every park starts out as a newborn space, and it needs to be nurtured by users in order to grow into an authentic park.’ Those who visit from outside can sense whether a park is loved by the locals as their own space.”

Becoming an authentic park here means being truly loved by Osaka residents who are proud of the space. The journey of this park, founded on the concept of Midori and innovation, is about to begin.