What are the goals for the core functions of a city of the future that is centered around a park? 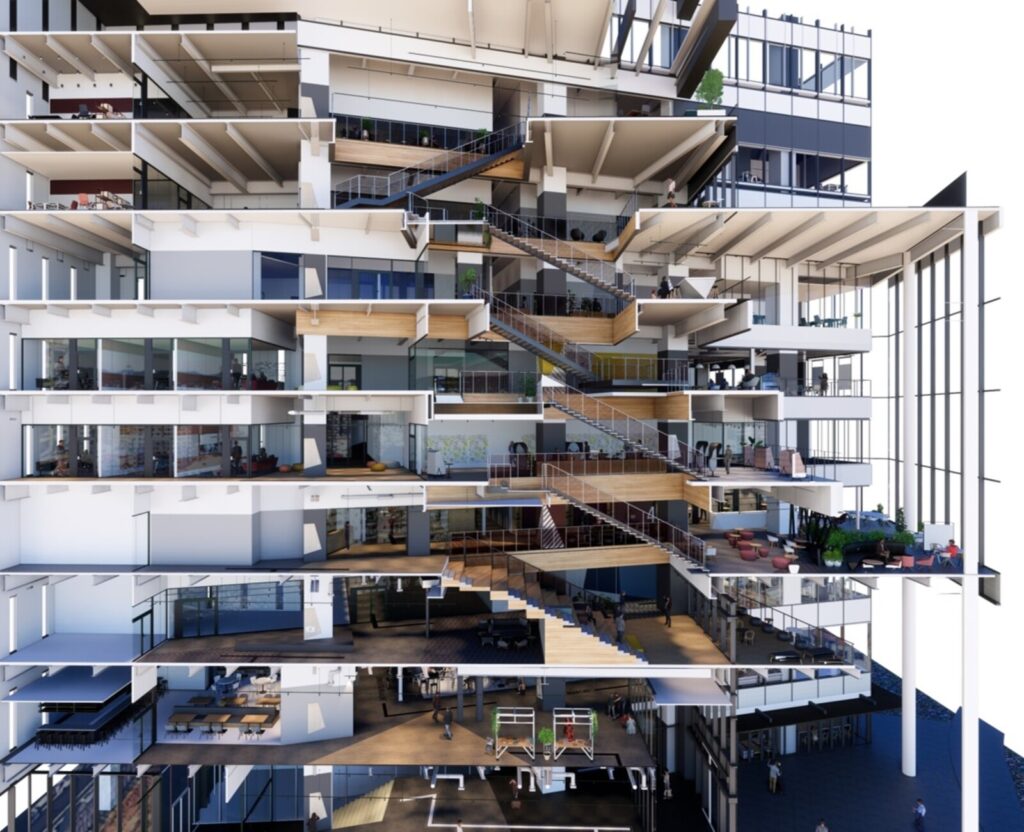 The Umekita 2nd Project—as the last remaining prime location in the Kansai region—is attracting much attention as one of Japan’s largest developments near a terminus. What are the core functions of this new townscape centered on its 4.5-hectare urban park and based on fusing “greenery” and “innovation”? We talked with two executives at the leading corporations involved in the core operations of the Umekita 2nd Project, namely Orix Real Estate and Hankyu Hanshin Properties.

Mr. Nishino of Orix Real Estate offers the following explanation about the core functions for the Umekita 2nd Project.

“Core function is a general term for three key elements: facilities that contribute to innovation, i.e., the core facilities; the management running the core facilities; and the support organizations serving to further innovation. Falling under the purview of core functions are not only matters of real estate—facility and operational planning, leases—but also a wide range of other activities, such as events and programs that contribute to innovation, support details, and network building. Our company takes the lead role in such review and planning, while Hankyu Hanshin Properties serves as the subleader.”

Mr. Hashimoto of Hankyu Hanshin Properties explains the goals of the core functions for the Umekita 2nd Project.

“The core function of the Umekita 2nd Project is to promote futuristic life design innovations through the synergy of interactions among the diverse individuals drawn in by the gravitational force of this urban park. Various keywords can be used, such as lifestyle and well-being, but we are not restricted to these, as we strive to create a new townscape that gives birth to innovative products and services for an enhanced health and richness of life.”

Mr. Nishino of Orix Real Estate adds, “That said, it can be difficult for the private sector to innovate by itself. I think this is only possible through a process of thinking and creating together of industry, academia, and government as well as the general public, in addition to those parties which are typically associated with innovation, such as companies, university research institutes, and startups. Therefore, with our key principle being ‘with innovation,’ we want to support innovation through a public and private partnership.”

In order to support innovation, discussions have been held since 2017 at the Promotional Council to Create an Integrated Site of Greenery and Innovation, which is comprised of the Osaka Prefectural Government, Osaka City, Kansai Economic Federation, Osaka Chamber of Commerce and Industry, the Urban Renaissance Agency (UR), Osaka Science & Technology Center, and developers. On September 13, 2022, an innovation support organization for the core function was established: the Umekita Future Innovation Organization (U-FINO). At the same time, the Co-Creation Generator (CCG) was created as an organization to manage the core facilities.

Mr. Hashimoto explains, “Regarding the roles of those two corporations, U-FINO is a support organization for innovation conducted through public and private partnerships with the participation of the Osaka City Planning Bureau, Kansai Economic Federation, and the Osaka Chamber of Commerce and Industry; Hankyu Hanshin Properties is responsible for U-FINO’s operations. On the other hand, CCG is administered by Orix Real Estate. Although the roles are split in this manner, both companies are working together to boost the operations of the core functions as a whole.”

“One of the issues is how to increase the contact points with the general public who visit the park. It is certainly true that the core facilities are predominantly in the North District Rental Building. However, they are not overconcentrated in one place. Some are also scattered about the South District and in the park to blend in with the townscape, and core functions will be developed throughout the townscape so that there are contact points with all manner of individuals. The core facilities in the North District Rental Building are also based on the concept of a mixed-activity space, with a salon with a four-story atrium where a variety of people can socialize, a wide array of communal areas, and a layout that synergistically mixes offices and commercial facilities. Operationally, this might be inefficient, but we are intentionally planning such challenging facilities.”

In the Umekita 2nd Project, part of the focus will be on supporting startups to stimulate innovation. In July 2020, the Keihanshin area (Kyoto, Osaka, and Kobe) was selected as a “Global Hub City” under the strategies for creation of a startup ecosystem to compete with the world’s top ecosystems, an agenda from the Japanese Cabinet Office. This highlights the importance of the Umekita 2nd Project of urban redevelopment. These three cities will join forces to support the creation of world-class startups in collaboration with the national government.

Mr. Hashimoto enthusiastically explains, “The types of business and other activities being promoted at the core facilities are not only existing companies, but also diverse entities, such as university research institutes and startups. Of these, startups are very important in terms of creating brand-new services and products that have never previously existed. The Umekita 2nd Project is in a very accessible location in Kansai, known as Keihanshin, which is a hub for the entire Kansai region. I believe it is the role of this new townscape to bring together, for everyone’s happiness, all the outstanding skills, knowledge, people, and information that have blossomed so far in each of the cities of Kyoto, Osaka, and Kobe.”

Mr. Nishino also speaks about the role to be played by this new city. “Expo Osaka–Kansai will be held in 2025, and in April 2022, the city of Osaka was officially designated as a ‘Super City’ under the National Strategic Special Zone system, with the aim of becoming the first complete super city of the future as a global forerunner of tomorrow’s lifestyle. Our hope is that the Umekita 2nd Project can seize such timely opportunities to connect activities in the Keihanshin area so that what were previously just ‘points’ can turn into ‘lines,’ and then into ‘planes,’ thus contributing to its role initially as a hub for Japan, and eventually for the whole of Asia.

“However, this does not mean that the core function of the Umekita 2nd Project should only be its own success. This can only be achieved by having a vision wherein various people can share their activities here and create new things together with others. As per the core function principle of ‘with innovation,’ this will be something created with everyone’s participation.”

Joint innovation with diverse citizens using a park replete with greenery as a focal point—the movement towards becoming a hub city of innovation that is representative of Asia has just begun.