How best to create roadways emblematic of a townscape replete with natural greenery? 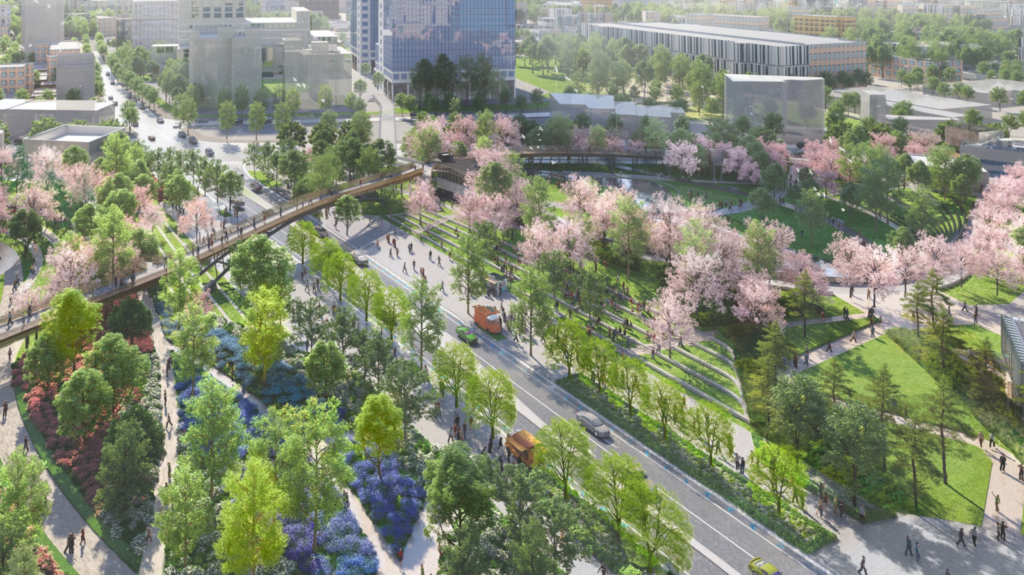 The Umekita 2nd Project will arise in front of the largest terminus in western Japan—a point where 13 subway and other private railways converge into seven stations, including the JR Osaka Station.

While construction of this approximately 4.5-hectare urban park is being carried out, an elevated passageway is being built smoothly linking the North Gate Building—where the Lucua Osaka retail complex directly connects with Osaka Station—and Grand Front Osaka; and roads transversing the park such as Osaka Station North Routes 1 and 2 are being redeveloped.

What sort of roads are best suited to a comfortable and lively, yet beautiful and graceful, urban space?

Mr. Hayashi of the Urban Renaissance Agency, which is in charge of infrastructure development, described for us the background to selecting a developer.

“Following on from previous redevelopment projects, in order to create an urban development in the Umekita 2nd Project District that would bring international competitiveness to the Kansai region, and eventually the rest of Japan, the Umekita 2nd Project Urban Development Policy was established in March 2015. Thus, it was decided to select a developer that could create an integrated urban development that includes about 4.5 hectares of urban parkland under the concept of ‘Fusion of greenery and innovation.’

“Roads in the town center that act as the framework connecting the district with its periphery will be upgraded as a ‘land readjustment’ project led by Urban Renaissance, but we also sought to realize the urban development concept by seeking the private sector’s originality and ingenuity to upgrade certain roads, such as the Osaka Station North (Eki-kita) Route 1, which runs east-west, as a ‘lively axis,’ and the Osaka Station North (Eki-kita) Route 2, running north-south, as a ‘symbolic axis.’ Projects covering a wide range of proposals for realizing these concepts were selected through a competition, and the parties involved have been working together to upgrade these roadways.”

Osaka Station North Route 1, which runs east to west through the middle of the park, effectively splitting the park into north and south zones, has been ingeniously integrated into the park through the creation of Step Plaza.

Mr. Hashimoto of Hankyu Hanshin Properties explains, “Three distinct points, namely the Reflection Lawn, Step Plaza, and Umekita Grove, have been planned for Umekita Park as symbolic urban spaces. Of these, the Step Plaza area is characterized by its integration of the road running through it into the park. Unlike other parks that people typically visit for a specific purpose, we hope that Step Plaza will also become a sort of common ground for the general public to interact and generate initiatives in the Umekita district as they pass through between the Hankyu Osaka Umeda Station in the north toward Fukushima and Oyodo to the south.”

“GGN proposed that not only the facilities in the park, but also the roads that face them, should be integrated into one symbolic site under this project. Although roads are inherently public spaces, I don’t think people easily relate to them as being a space for them, unlike parks. Step Plaza strives to create an attractive roadside space, where pedestrians can sit on the steps and idly observe the people passing by or admire the scenery on the other side. By integrating the road into the park, the road will feel more open to the public, and the easygoing openness that is so typical of Osaka will be created, so that everyone can feel that this is their own space.”

Mr. Ono went on to say that there are other ingenious ways to landscape the road for better integration with the park.

“We are thinking about using paving materials of the same texture for both the park and roadways, as a way to make them feel more integrated. However, since safety is the top priority for this road upgrade, regardless of how good the design is, we cannot use such paving materials everywhere as human life takes priority. Especially at intersections with heavy traffic, it is not possible to use such materials for safety reasons, but for the ‘lively axis,’ we plan to integrate the road and park space for some 120 meters. Also, to ensure that the roadway and sidewalks can be used as an integrated plaza during events, we plan to have a movable median barrier (sheath-tube guard fencing) in the middle of the roadway and a crossing-prevention fence that can be raised and lowered between the sidewalks and the roadway.”

Osaka Station North Route 2 runs north-south through the park and has been designated as the townscape’s “symbolic axis.” The pathway will be upgraded using natural paving stones, while different lighting measures will be taken than in the zones developed previously.

Mr. Ono explains, “We have already installed electrical outlets at the bottom of the trees lining the street so that lighting can be directly connected to the trees, as was used at the Grand Front Osaka complex, the zone developed previously. However, all roadside trees are up-lit in that district, but for the Umekita 2nd Project, the townscape is being developed with more consideration for biodiversity, so we have placed lighting at different points, such as park and facility entrances, to reduce the overall illumination level and harmonize the lighting with the park.

“By doing this, we would like to express integration with ‘greenery,’ which is the overall concept behind the Umekita 2nd urban development project, in contrast to the commercial flourish of the Umekita 1st Project.”

Mr. Yoshioka talks further about the concept of integration with “greenery,” which is a hallmark of the Umekita 2nd urban development project, as follows.

“The Osaka Station North Routes 1 and 2 form the framework for the waterways and greenery under the basic development plan. Together with the roadside trees, greenery in the park, and the green walls and rooftops of buildings alongside the road, we plan to create a continuous ‘green valley’ in the park as well, such as by greening the Next Innovation Museum in the park, and the slopes of the park.”

“Osaka Station North Route 3 is on the opposite side of the development district from the ‘symbolic axis’ (Route 2). Vehicle traffic in this area and on the Kujo Umeda route is heavier than on the ‘lively axis’(Route 1) and ‘symbolic axis.’ They could easily be cast in the shade by the ‘lively axis’ and ‘symbolic axis,’ but the landscaping has been carefully considered to prevent that. In the same way as Osaka Station North Routes 1 and 2, the paving materials used in the Umekita 2nd Project district are to be standardized, with relatively large trees planted alongside the road, in order to create an integrated roadside landscape for the entire area, with measures to make them pedestrian friendly as well.”

Every major city features a boulevard that becomes the beloved image of that city. Beautiful roadways lined with exceptional greenery are sure to leave a strong impression on all who pass through as representative of the Osaka of the future.