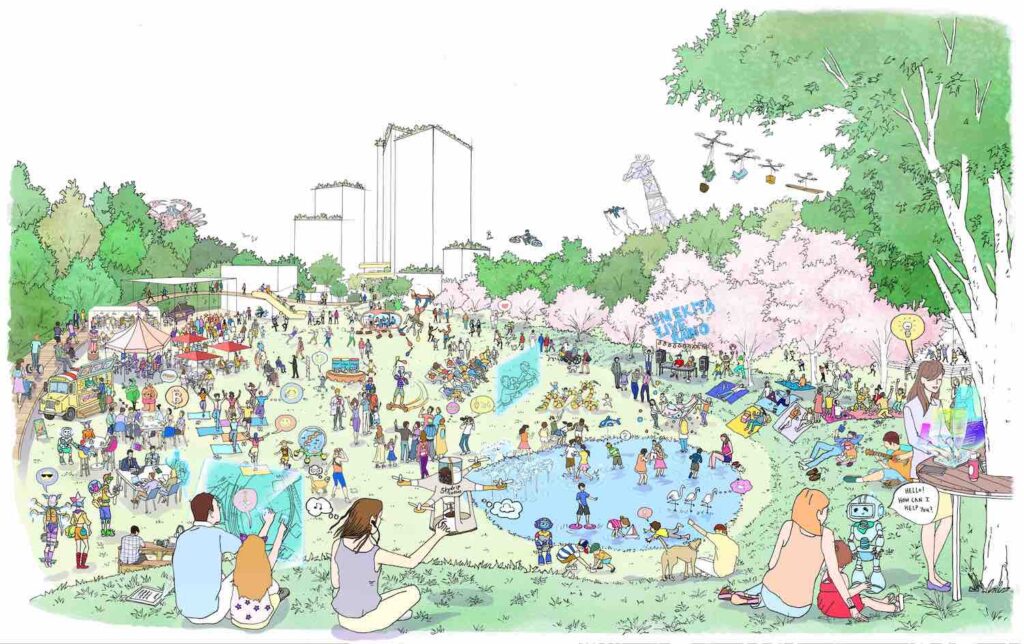 The most fundamental concept of the urban development in Umekita 2nd Project is a “base with ‘MIDORI (greenery)’ and ‘Innovation’ in harmony”. The new urban development, fostering interaction with citizens gathered in the abundantly green urban park, supports the creation of new ventures such as new experiences, products and services that reflect the various social themes, technology and ideas emanating from those diverse encounters. In addition, by nurturing knowledgeable human resources and working positively on international exchange, etc., it attempts to create innovation from a diversity of approaches. New facilities and activity spaces designed in collaboration with the neighboring Knowledge Capital of Grand Front Osaka are expected to contribute greatly as sources of innovation in enhancing not just business, but people’s lifestyles. Standing out as a means towards this new urban development is citizen participation-type urban development, which incorporates the opinions and viewpoints of various people, not just businesspeople or those from affiliated companies, but entrepreneurs, researchers, those living locally or visiting the town, etc.

“What surprised me during previous observation in Scandinavia, was how members of the general public were prepared to get involved in urban development or in solving social issues as part of everyday life. For example, in Denmark, company employees usually leave work on time without overtime, and there are commonly scenes of everyone having discussions at town meetings after work. In the background to that is the belief in prioritizing sustainable and local, as well as the standpoint of contributing to society, which exist as a common axis for both businesses and citizens. With this citizen participation-type urban development as reference, we hope to create Umekita 2nd Project’s own ‘living lab’ and set-up whereby citizens can get involved, and Osaka identity and the good things about Osaka are brought to life,” says Mr. Yo Hirai of Obayashi Corporation.

A living lab is a method of approach for innovation creation in new manufacturing and service development, whereby citizens participate and help create it. It was born in America in the 1990s, and advanced in Sweden and Denmark and other Scandinavian countries.
Ms. Eri Ashida of ORIX Real Estate Corporation continues. “Umekita 2nd Project too has already carried out citizen participation-type workshops. Teams of 5-6 people were formed to exchange opinions on each theme of the issues posed by companies and academic groups. The specialist knowledge and technology of Japanese companies hold splendid potential, and with the addition of completely new perspectives from citizens and their unexpected ideas, I am hoping possibilities for the urban development will stretch even further.”

“I myself participated in the workshops as a citizen. I found the themes of the issues posed by companies and academic groups hard at first, but just by the facilitator altering the themes slightly, it was easier to present opinions and ideas. Then, as discussion developed with my team, brilliant proposals were formed that I would never have thought of by myself. I felt it was very effective for companies, academic groups, citizens and people from other viewpoints to bring together their diverse perspectives. In the project planning process hereon, I hope we can pursue the real value brought about by those bridged connections and chance encounters,” says Ms. Saki Hori of Takenaka Corporation.

“Rather than clinging to the old way of thinking in dealing with social issues and difficulties, the workshops have brought about new perspectives. New services and projects are born, people’s lives are enriched, and innovation occurs with good results for both companies and citizens. By building up these methods in Umekita 2nd Project, diverse human resources are sure to gather naturally and foster activity. I think we can achieve that kind of urban development together with citizens,” says Ms. Rina Tanabe of Hankyu Hanshin Properties Corp.

“The issue is how to support citizen participation from the point of view of urban development. It is difficult to adjust support, and if it is built upon too much planning, participation becomes a chore and interest will halve. Having said that, it is also difficult to allow free reign. We are working on how to draw additional support lines, while considering these points, so that all citizens can participate enjoyably,” says Mr. Hirai. “From hereon, we are scheduling lectures and events, not just workshops, as well as investigating social experiments in which citizens participate. I would like to see participation from a variety of directions, including online by people living abroad so as to give us a reference of examples in other countries. We can do it because people from Osaka have an open-minded spirit and a basis of accepting the opinions of a wide range of people,” says Ms. Ashida.
Urban development here has a tangible aspect of constructing the town, but also an abstract aspect of everyone creating the potential for ease of living and ways to enjoy the town. This new approach to urban development gave a sense of the possibilities and expectations for creating a future beyond imagination.