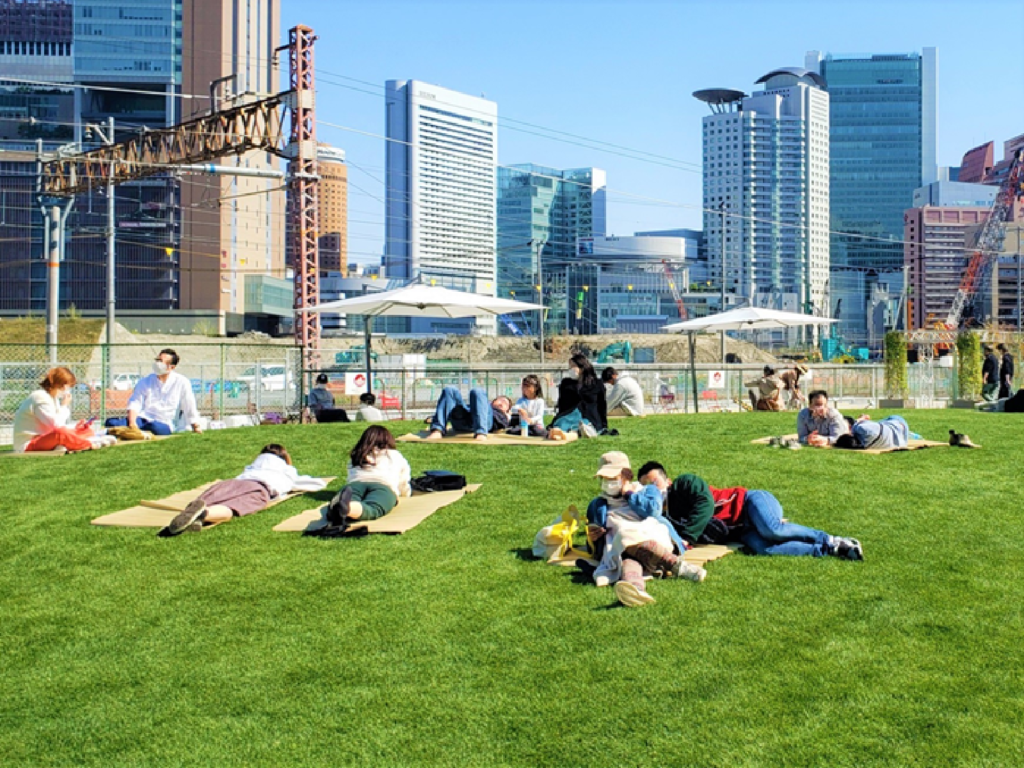 Do you know the expanse of verdant lawn as you emerge from the underground passage from Grand Front Osaka to Umeda Sky Building? This outdoor experimental space Umekita Sotoniwa Square will be open during a limited time only, for the thousand days from July 4, 2020, through March 31, 2023. In the meantime, various trials are underway for Umekita 2nd Project Urban Park, which will enjoy an advance opening in summer 2024, under a pioneering and dynamic style of park and area management.

A walkway divides Umekita Sotoniwa Square into north and south areas—South Lab features an expanse of natural grass, while North Lab is fitted with artificial grass. As a public space opened in the local area, it hosts events in association with nearby areas such as Oyodo and Nakatsu. The initial step was taken by the Oyodo Morning Marché, held once a month. Nearby stores set up stalls, including craft beer and food vendors, flower shops, art shops and variety goods. In addition to these, in December 2020, a green illumination event was held using LED candles, in collaboration with the Kameyama Candle House in Oyodo, to send a bright message during the COVID-19 pandemic. There are plans to continue carrying out such projects in association with local businesses.

To create a welcoming space where one wants to pleasantly linger, it is necessary, first of all, to capture the hearts of users. To that end, the Sotoniwa Club supporting the activities of citizens came into action this spring. This is a trial run, in preparation for the “Osaka MIDORI LIFE” to be realized in the Umekita 2nd Project, in which everyone in turn can use Umekita Sotoniwa Square as their own space. One such example, the music program “Niwa no Ne,” was held three weeks running on Saturdays in March, with performances by professional musicians—a jazz saxophone player, violinist, cellist. Around 500 people attended, making purchases at food trucks that had been set up in the area and eating and drinking sprawled out on the grass.
Even when no event is being held, it is designed to encourage you to stay, be comfortable and have fun. Outdoor-use chairs and tables and cozy sofas are provided, and at lunchtime various food trucks sell food and drinks. Every effort has been made for its active use, such as free rental of giant Jenga and table tennis, and a garden whose users share in its cultivation.

Another project at Umekita Sotoniwa Square is a demonstration trial for future urban planning: the local community, city government and private businesses are working together under the “MIDORI (green) Living Lab”*1. In October last year, operating partner Nishio Rent All, a company renting out equipment for construction and events, temporarily moved part of its main office to its own rental tents and box trailers set up there to create an experimental “MIDORI Office” for everyday administration. It drew attention as an experiment for seeing the effects on workers and for BCP*2 emergency measures of working in a temporary communication environment, as if in an emergency situation like a natural disaster.

AI and robots are now being used experimentally at Umekita Sotoniwa Square in anticipation of pioneering management at the coming Urban Park. As one COVID-19 response, an AI camera is in place so that a smartphone can be used to check in real time on how crowded the area is. In addition, a grass-cutting robot has been deployed whose work efficiency is being monitored. Since a lawn is greatly affected by weather and wear and tear by users, it is difficult to keep it in a beautiful state without the efforts of an experienced supervisor. There are still many issues that need to be solved in achieving an environment pleasant to spend time in, such as the pressure of costs of lawn management and high-quality maintenance, and measures to combat the eddies of wind formed at ground level in the vicinity of high-rise buildings.

In this way, Umekita Sotoniwa Square is responding to the challenge of creating a multipurpose space where people will want to go and linger—designing an everyday place to spend time, providing food, drink, and services, holding events and hosting the Sotoniwa Club. The name Sotoniwa (“outside garden”) comes from the hope that, despite it being an open, public place rather than the private garden of a house, it will be nurtured by citizens as a second garden. Next-generation open spaces of a kind unseen before can certainly be found germinating in Umekita Sotoniwa Square.

*1 Living Lab: a method of identifying people’s needs in manufacturing and services by getting citizens and users involved long-term, and then creating services together in line with those needs.

*2 BCP: Business Continuity Plan. In the case of an emergency such as a natural disaster, terror attack or system failure, a plan with prepared measures enabling continued working and early recovery.