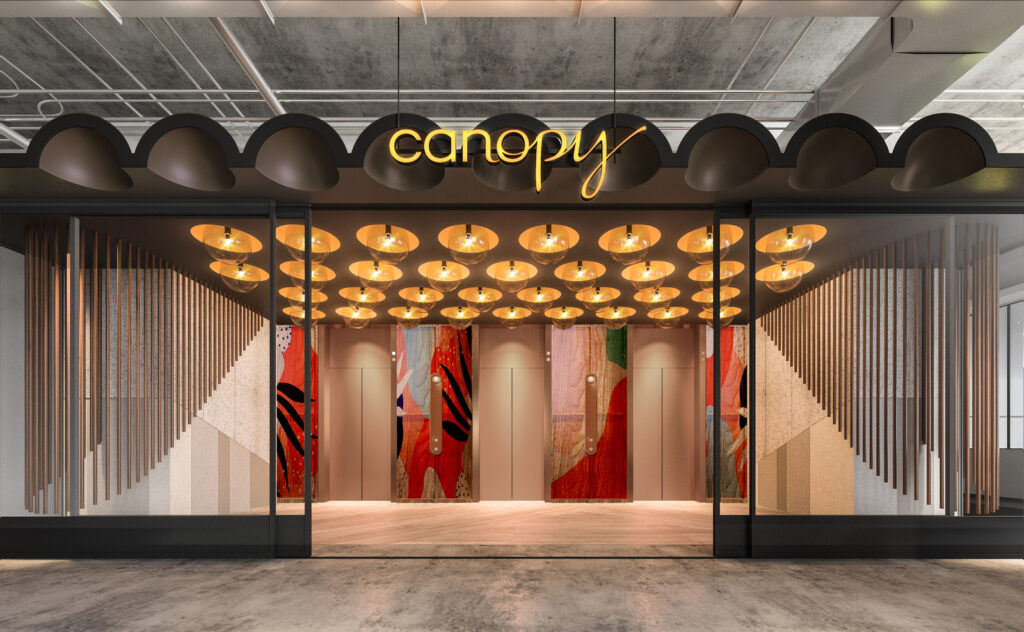 Canopy by Hilton is the lifestyle brand started in 2014 by the Hilton Group operating around 7,000 hotels and resorts worldwide. The Canopy opening in the Umekita 2nd Project in 2024 will be the first in Japan. As with the rest of the Canopy hotels, it will work to provide a personalized stay while spotlighting the special features of the local area. We asked the developers and designers for their thoughts on the Osaka-style, Umekita-style hotel that they have in mind for the Canopy by Hilton Osaka Umeda.

Ms. Chihiro Nishinaka of the Orix Real Estate Corporation, in charge of hotels, talked with us about the Canopy concept.

“While of course providing guests with a relaxing stay, Canopy strives for added value through the various experiences on offer during stays. For that, it offers a simple, guest-oriented service, a comfortable space and specially selected items only found locally. And that emphasis on a design incorporating the essence of the local area should help guests learn more deeply about that place.”

Nikken Space Design is handling the design of the Canopy by Hilton Osaka Umeda coming to the Umekita 2nd Project. Ms. Nishinaka has praise for the company. “From the competition stage, it showed a high degree of understanding of Canopy, and what is more, it received high acclaim from Hilton, too, for its positive attitude to designing the Canopy to be built in the Umekita 2nd Project. We on the developer side also firmly believed that it would be a steadfast partner to create together the first Canopy in Japan.”

Mr. Kenji Yonezawa of Nikken Space Design looks back on his visits to Canopy hotels overseas.

“Canopy is a relatively new brand launched in 2014 and with just 37 hotels worldwide, yet I sensed that they were all hotels with a close affinity to the local community and that they are continuing to update in line with the cities they are in. Also, one of the most important elements in Canopy is “neighborhood.” It is the idea of putting importance on localness, or their relationship with the nearby area, and in Canopy in the U.S. they provide hospitality chocolates with a connection to the locality; they create an open, familiar relationship with guests like they would with “locals,” rather than a formal hospitality. Based on that, we considered anew what Osaka style might be in order to follow the Canopy local spirit. It was then we consciously created designs featuring the Osakan sense of humor, and dropped that into the space.”

Since the Canopy brand is hotels with a local feel, Canopy by Hilton Osaka Umeda incorporates the Osaka sense of humor. The keywords chosen to turn that humor into a Canopy-style design are “Hack Osaka.” Senior designer Mr. Mitsuhiko Imai explains.

“ ‘Hack’ literally means to chop or cut open. Although it now commonly has a negative image of unlawful cyber hacking, it originally meant cleverly solving difficult tasks through high technical skills. ‘Hack Osaka,’ then, points to changing the shape of stereotypes, mixing in new ideas and rewriting the system to date. Through Canopy as filter, we seek to use humor to ‘hack’ Osakan regionality and culture to express a new Osaka.”

Among the designs hacked from various Osaka motifs is the bold design of the lighting fixtures loosely based on the shape of kushikatsu skewered meat and butaman steamed buns with a minced pork filling, as well as the carpets scattered with motifs inspired by Osaka’s traditional Eight Hundred and Eight Bridges. These have been devised to give a sense of Osaka throughout the hotel. A more specific example is the design for the ceiling of the entrance hall. As if to be the face of Canopy, it is like an upside-down tako-yaki (octopus dumpling) mold, a design hacked from a well-known Osaka street food. In addition to motifs representing Osaka, there are also ones evoking more local memories of Umekita, says Mr. Imai.

“The Umekita 2nd Project site where the hotel will be built was originally the trainyard of the Umeda Freight Station. On the 11th floor, we plan to install a seesaw that links with the sleepers of the freight yard. The hotel will be dotted with countless design motifs special to this place, such as a chandelier in homage to the lights used to illuminate the Osaka Metro Midosuji Line. Things you don’t recognize at first glance will give you a reason to talk to the hotel staff, and so make new discoveries about the origins of the designs and about the local culture. It was like that in the other Canopy hotels we stayed at, and I think that is the essence of Canopy.”

Mr. Yonezawa elaborates on the essence of this Canopy design. “In the tea ceremony, there is an allusive method of expression called mitate , meaning likening something to something else rather than expressing it as it is. I feel that Osaka style, too, involves likening something to the humor within it, not presenting it straight. It happens that Sen no Rikyu, who attained greatness with Wabi-cha, a style of tea ceremony emphasizing simplicity, came from Sakai in Osaka prefecture.”

Canopy by Hilton Osaka Umeda will open in the upper part, floors 10-25, of the North District Rental Building. The lower floors of the building will contain commercial facilities and innovation support, and at the base will stretch the large urban park: this area thus most deeply embodies the Umekita 2nd Project theme of providing a base with Midori (greenery) and Innovation in harmony, a space where diverse visitors can mingle. Ms. Nishinaka talks about the value born from the coexistence of the Umekita 2nd Project and Canopy.

“As our core function, we aim to create life design innovation giving birth to new technologies and services through the interactions between people, as well as between companies. With various people—staff and guests and guest-on-guest from Canopy in the same building, as well as people visiting the hotel based on the core function—mingling and connecting, we expect to see signs of real vitality and energy. In that sense, we can say that the Umekita 2nd Project and Canopy are heading in the same direction, and are extremely compatible.”

In particular, Canopy Central, the place emblematic of the hotel, links to what Umekita 2nd Project is striving to achieve, says Mr. Imai.

“When you emerge from the elevator on the 11th floor, stretching out before your eyes is Canopy Central. In regular hotels, the reception area is a separate space, but here reception, the all-day dining room, bar and even an outdoor garden all run together in a seamless space. It feels as if the outdoor garden is an extension of the urban park in the Umekita 2nd Project. A diverse range of people—not only guests, but workers and local residents—will gather here for a spontaneous energy giving birth to a range of new beginnings.”

Canopy by Hilton Osaka Umeda, embracing its neighborhood for a space that is open and that gently links the hotel to its surroundings. A hotel where people meet and connect, where new ideas emerge and spread out to the world. Such synergy should indeed keep the new townscape of the Umekita 2nd Project ever-green.