Restoring Our Life “Climate” based on Memories of the Land 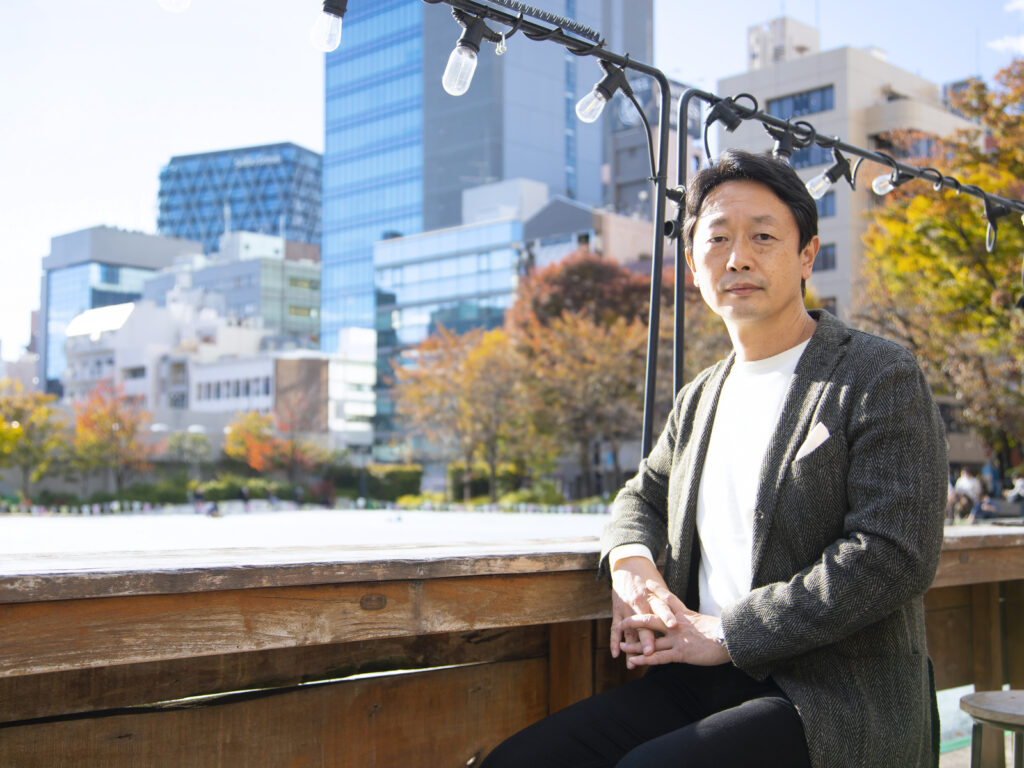 Tatsuya Hiraga is the CEO of Landscape Plus and also serves as vice president of the Japan Landscape Architects Union (JLAU). We talked with Hiraga, who has won numerous awards for his creation of comfortable spaces where people can gather, for his thoughts on landscape architecture in Japan.

After graduating from high school in Tokushima, Hiraga went to the United States to study landscape architecture at West Virginia University. After graduation, he took on a landscaping job at a major Japanese design office, and then went independent to establish Landscape Plus. He recalls, “I didn’t like the closed nature of relationships in the countryside, so I went abroad straight after graduating from high school, but perhaps it was having grown up in a rich natural environment, along with my love of drawing, that attracted me to landscape design.”

As a new employee in his twenties, he became frustrated at not being able to do the kind of landscape design that he’d envisaged as a student. The turning point for him was winning an award from the Japanese Institute of Landscape Architecture in 2004 for the project “i-Garden Air” in Iidabashi in Tokyo, the design and supervision of which he was engaged in from the planning stages.

“The site was previously a Japan Railways freight depot located between the Imperial Palace and Koishikawa Korakuen. The concept was to connect these two locations, which constitute the social capital for the area, with a pedestrian walkway and a new green network. I researched the local history before embarking on the design and discovered that a river known as the Hirakawa had once flowed through it to the Hirakawa Gate of the Imperial Palace. After talking with people who had long lived in the area, we decided to restore the river embankment that had previously been there. At the time, people were more interested in modern design, but I realized that searching memories of the land and accurately restoring the scenery is a form of urban development that looks to the future.”

Hiraga’s work is wide-ranging, extending from public facilities, such as urban parks and plazas, to commercial buildings, educational facilities, and hotels. But one thing they all have in common is the idea that a healthy environment in which people can live comfortably should be rooted in the local climate, meaning the physical, historical and cultural environment of that place. He says, “Before starting any project, I always research the history of the land going back at least thousands of years, and sometimes even hundreds of thousands of years. Climate at its most basic is wind and earth, i.e. air and ground. Our bodies are in constant contact with the air and ground. We feel the climate, which is the very environment required for us to live, with our whole body.

“When I first started working in the early 1990s, economic growth was prioritized in Japanese society, so the concept of a landscape that encourages what can be called social growth was not easily accepted. However, as a result of exploiting the environment for the sake of economic growth, our society has become significantly strained. Amid calls for SDGs (the Sustainable Development Goals of the United Nations) on a global scale, many have realized the need to create an environment that maintains social diversity. Landscape design aims to create such an environmental infrastructure. I believe that the economy is revitalized and society comes together only when people have an environment they are proud of.”

Minami-Ikebukuro Park, completed in 2015, is rated highly as an urban redevelopment project implemented through public and private partnership. He explains, “Although Toshima Ward in Tokyo is the most densely populated urban area in Japan, in 2014 it was designated as the only one in the 23 wards at risk of disappearing due to depopulation. The main reason was that the proportion of the population of a child-raising age was extremely small. Prior to design, I sought the opinions of many different categories of residents, and one young mother requested a park where children could play safely while she ate with her friends, i.e. other children’s mothers. Prompted by that request, I thought up a way to have a café/restaurant in a public park, with some of the revenues channeled back to running the park. The large lawn is defined as an urban living space, and we created a new way to use this park as an asset, such that meals can be prepared outdoors in the event of a natural disaster.”

Local landowners wield a lot of power around Ikebukuro station, and it was not easy to reach agreement between them and the government, resulting in a prolonged deadlock before any construction could be started. Amidst the conflicting opinions of people having many different perspectives, Hiraga—who had been put in charge of the park’s overall execution—contemplated the past natural scene in Ikebukuro. He describes its history as follows: “The western side of Tokyo is a Pleistocene plateau created by volcanic ash accumulating from eruptions of Mt. Fuji and Mt. Hakone. This plateau was eroded by rising sea levels, creating the original topography of the Tokyo area. Ikebukuro lies at the edge of the plateau on its highest part. A pond was created from a spring fed by rain falling on the Chichibu basin for over 100 years, which in turn became a riverhead, and villages arose along the riverbanks. In the area of the Ikebukuro Nishiguchi Park (the West Gate Park, also referred to as Global Ring) that we designed on the other side of the station, there used to be a large pond that is reputed to be the origin of the name Ikebukuro (literally, “pond bag”), with a river flowing through the Minami Ikebukuro Park area. These days, the townscape is split by the station, but it was built on the same basin. Only after understanding this historical background could I have an aspirational discussion about a vision for the future with the local landowners.”

Seven years after its completion—with a few twists and turns along the way—Minami-Ikebukuro Park is now a place which sees a wide range of people including women with children, people who work in the area, students, and the elderly, gathering. Once a place with a poor reputation that people hesitated to enter, Minami-Ikebukuro Park’s redevelopment has truly created an “urban oasis.” He says, “Part of what attracts so many people to this place is that they can escape the hustle and bustle in front of the station and take in a great view of the sky in an area surrounded by greenery. The desire to be surrounded by nature is hard-wired into our DNA. Since ancient times, people concerned themselves with the time and space to live together with nature in terms of protecting themselves from outside enemies. Now, our society has become so convenient that we no longer need to worry about such things, but our human senses have been diminished. The word ‘wellbeing’ is an essential keyword in talking about modern society, and underlying that is our need to connect with nature. In order for our bodies and society to remain healthy, I believe it is important to revitalize our senses by reflecting on the time and space we share with nature.”

The Green Springs complex in Tachikawa opened just three days after a state of emergency was declared due to COVID-19. Based on the concept of a “wellbeing town,” it includes offices, a hotel, a large hall, shops, and an art museum in the spacious area adjacent to Showa Memorial Park, with a one-hectare plaza as a public space in the center surrounded by greenery and water. It is characterized by a scattering of veranda-like porches creating a sense of unity with each facility. The project’s aim was to create a town where people could be mentally and physically healthy, and, ironically, the resultant project proved to be a forerunner to a post-COVID lifestyle. He says, “To relax in a comfortable spot that mimics the local waterside environment, such as the Tama River and Tamagawa Aqueduct, while breathing in the fresh outdoor air adjacent to Showa Memorial Park. People can chat while embraced in the vast spatial and temporal axes that the area boasts. The concept that we proposed is well suited to our new post-COVID worldview. Putting the economy first in our extremely overcrowded society in Japan has made it hard to breathe. Now is the time to listen to our hearts and discover what true wealth is. Women, in particular, seem more sensitive about the environment out of concern for their children’s health. From now on, a better approach to design is to create the kind of places that women would choose.”

Regarding the Umekita 2nd Project, Hiraga expresses high expectations for the Kansai area’s network as a biosphere.

“Umekita is the pivot pin of a fan spreading across the Kansai area. The fan refers to the Yodogawa River basin, which lies at the root of Kansai culture. There are innumerable treasures in this basin that Japan should preserve for the future. The mouth of the Yodogawa River connects us to the water sources of all six prefectures in the Kinki region. In order for Umekita to be the pivot pin of this fan, it is important to construct a shared platform that enables a cyclical water network as the basis for life, including human and natural resources. While the global population is expected to reach 10 billion by 2050, I believe that, as a demonstration of a society using water wisely, Umekita can disseminate local values that can come to be supported globally.”

Hiraga believes that improving the local community with the SDGs in mind can help lead to global sustainability. It takes a decade to create new scenery, a century for new landscapes, but a millennium to amend the climate. While thinking about this unique regional climate, he would like Umekita to offer a margin of time and space to contemplate new landscapes for ourselves. In order for those of us alive today to be considered good ancestors, we must have the intelligence to consider our everyday lives and the future of the earth in the same spatial and temporal axis.

Tatsuya Hiraga
Born in Tokushima Prefecture in 1969. After graduating from high school, he moved to America by himself to study. He graduated from West Virginia University in 1993 with a degree in Landscape Architecture. That same year, he joined Nikken Sekkei. In 2008 he established Landscape Plus, where he remains to this day. Concurrently, he was appointed as vice president of the Japan Landscape Architecture Union.