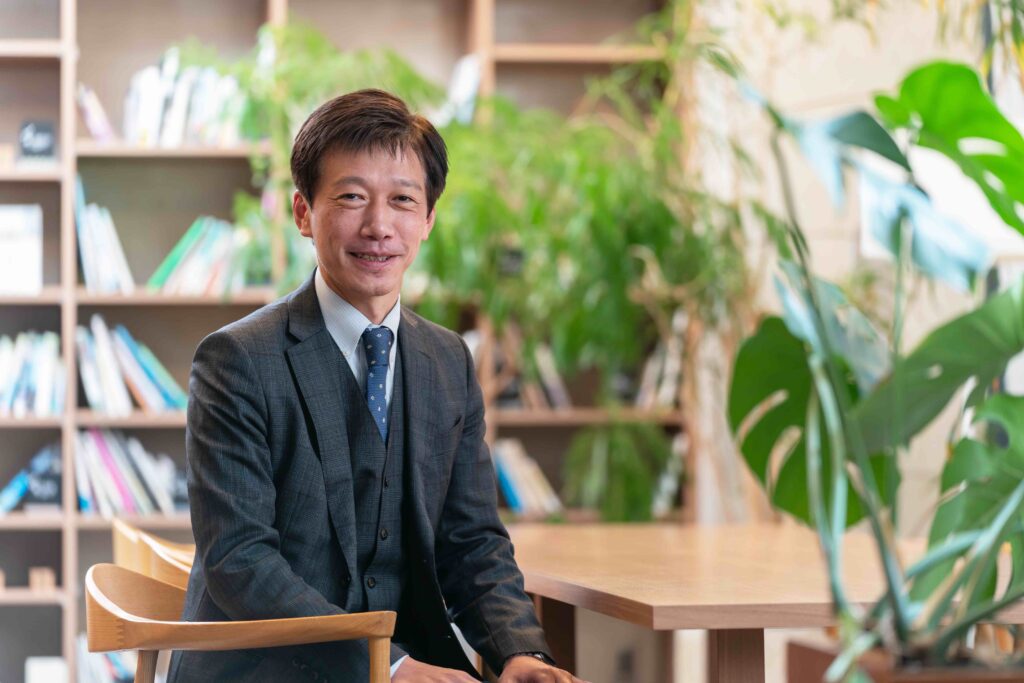 Mr Takehide Murakami has put all his efforts into generating activity in the town of Kobe, including the “Kobe Motomachi University” project creating social circles through learning, and social experiment “Urban Picnic” of the East Park on the east side of the Former Foreign Settlement. He is also 3rd-generation president and representative director of Murakami General Construction that has been in operation for 75 years. I asked him about the driving force for his on-going deep connection with Kobe.

Q. What was your inspiration for wanting to improve the town of Kobe?

A. Through the influence of my mother who loves nature, I majored in ecology at university. At first, I had no intention of succeeding to my family’s construction business, and I even saw the construction industry as an enemy from the viewpoint of nature conservation (laugh). However, while 4th grade of university I was involved in the Great Hanshin Earthquake, and seeing buildings collapse moved me to tears, and it was at that time I realized how much I loved the town of Kobe. It was, of course, construction companies that were the great strength in giving the town rebirth. It was then that I chose to work in the construction industry.

Later, when the Great East Japan Earthquake occurred in 2011, I went to Tohoku as a volunteer. There, I was asked by one of the victims, “You’re from Kobe, aren’t you? How has Kobe revived itself?”, but I couldn’t answer them. I still didn’t believe the town of Kobe had revived itself, and looking back, although I had thought about the town so much during the Great Hanshin Earthquake, I realized that for 16 years I had done nothing for Kobe, and so I had nothing to tell them. What could this inspire me to do? I thought, and that was when I started up the “Kobe Motomachi University”, in June 2011, to see what a study group with knowledge of the town could achieve. I invited people to be lecturers who were working with purpose in Kobe, and created a place where people would naturally connect through the medium of study. This year marks its 10th anniversary, with around 90 sessions held to date at the rate of one per month.

Q. You went on to start the social experiment “Urban Picnic” of the East Park in the central area of Kobe. How did the ways of using the park change through the project? Also, tell us about an event held to date that had a great impact.

A. The East Park, located around 10 minutes’ walk from Sannomiya Station, was originally a playground reserved for foreigners of the Former Foreign Settlement. Among the urban parks of Japan, it rivals Hibiya Park in Tokyo and Yamashita Park in Yokohama with its roughly 150-year history. It was a hive of activity during events such as the Kobe Luminarie and Kobe Festival, but at normal times it was quiet, and the soil of its open space was like a desert. It came about following a proposal made to Kobe City to grass the area and install a cafe and outdoor library.

At the start, in 2015, social experiments were only carried out for two weeks in spring and fall, but now those citizens who used only to walk straight past the park have become accustomed to resting on the grass and spending time there. From 2016, it was allocated a budget from the city, and more or less the whole open space was grassed over, and various programs were held there. “Concert on the Lawn” performed by professional musicians, yoga, hula and other activities, poetry recitals, etc. What I like is the program “East Park’s encounter with musical instruments”, which involves bringing and casually performing the musical instruments lying dormant in your home. So, to organize a yoga program, you need to be a yoga teacher. But for this, all you need to be a organizer is to bring along the musical instrument in your home. It doesn’t have to be a violin or trumpet, castanets will do (laugh). I think it’s very important for citizens to become the organizers, and from the organizers’ standpoint, an attachment grows for the park, and a desire to nurture it by themselves. The schedule is to renew the entire park and reopen it in the fall of 2022, along with a facility to draw crowds.

Q. So the initiative is for all citizens to become players and nurture an attachment to the park, but is there anything they need to be careful of?

A. I’m not comfortable with the word community, and I try not to use it and try to avoid creating communities. Community is a word that necessarily builds a boundary between inside and outside of a community. If people think somewhere is a place only for regulars to gather, then they will not drop in as it feels uncomfortable. So I always make the upmost conscious effort not to create a situation which is hard for outsiders to enter. A park is not somewhere where that should happen. I am careful not to encourage the bad aspects of community.

Q. You operate “Street Table Sannomiya”, a currently open seasonal outdoor hall for music and food utilizing the site of the Sannomiya Terminal Building in front of JR Sannomiya Station, but were there any difficulties in getting that up and running?

A. It started on December 19, 2020, and is scheduled to be open until September 26, 2021, but the moment is started there was a string of extremely cold days. When I first heard the plan, I thought about giving it up. I had no experience of doing anything in a prime district in front of a station. However, thinking it might create at least some business for the Corona-struck restaurant industry and people of live music venues, I decided to go ahead in the spirit of a risk-taking volunteer (laugh). It has food stands from eight restaurants in Kobe City, and a specially installed stage.

A big collaborative project between Kobe City and JR West all too often becomes a venue for wearing someone else’s livery, and which citizens visit as consumers. Rather than that, I wanted to see citizens getting more involved, and to create a place where various people can connect, so I tried to share work from the initial making process onwards with others by holding workshops to paint stall chairs, and make objects of interest from unwanted toys. I got eight groups of designers to design each of the eight restaurant food stands in individual style, and found other, further ways to encourage people to spend time in the station square.

Q. What do you think about the Umekita 2nd Project under way in neighboring Osaka?

Actually, I created the venue “UMEKITA BASE” of October 2019 to early September 2020, utilizing the 80 square-meter space by the overground passage linking Grand Front Osaka and Umeda Sky Building. Originally, that passage was where everyone tore through intently at speed (laugh). Wondering how long people might linger there, I gradually found more players in the hope of nurturing an attachment to the place; a cafe was set up, the “MIDORI Concert” was organized, and a piano installed for anyone to play at leisure. Through the creation of a vast urban park in Umekita 2nd Project, I look forward to it linking up Osaka Station with Nakatsu and the Oyodo area which were previously fragmented.