No Longer in Search of MIDORI (Greenery), but “Growing” 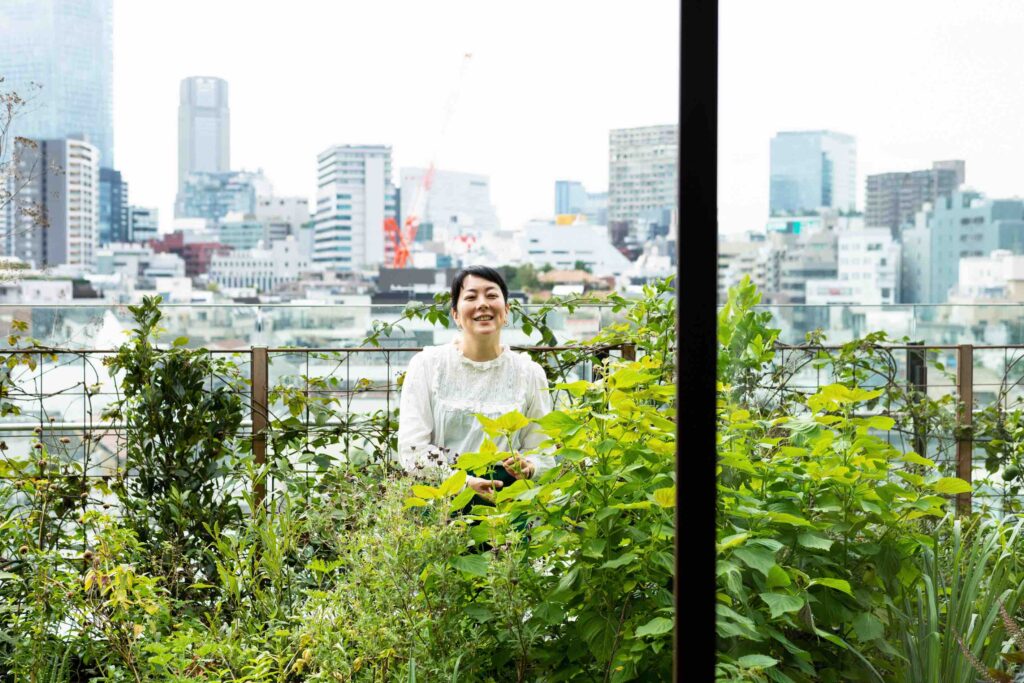 Ms. Yuri Nomura, chef, is owner of restaurant “eatrip” on a backstreet of Harajuku where greenery and soil still remains. She continues to drive culture relating to food through writing books, organizing events, and even directing films. Under the motto “Life as an eating trip”, she constantly reinterprets and communicates, from new perspectives, food culture that cannot be severed from life-style. In January 2020, she opened grocery shop “eatrip soil”, with its own botanic garden surrounded by greenery and soil, inside GYRE.FOOD along Omotesando’s Zelkova-tree avenue. This was the start of activities linking producers and consumers all over Japan.

Q. It’s an amazing space quite unimaginable for the 4th floor of a city-center high-rise building. It’s a strange feeling to be in the middle of Omotesando, inside a shop yet sensing nature.

A. The space is full of Earth’s energy, with the whole floor covered in soil. The design for the space of this whole floor was led by architect Mr. Tsuyoshi Tane, who continues to create structures on the theme “memories of a place”. I greatly empathize with the “memories of a place” that he talks about. Omotesando might be, at one glance, a town full of high-rise buildings, but here on the 4th floor, you notice the breeze blowing through the valley. Aoyama was once a mountain, Harajuku, a field, and Shibuya, a valley. You can still sense the remains of the undulating, nature-rich land running with many streams, even today.

Q. What was your aim in creating the place “eatrip soil”?

A. As something I wasn’t able to do at a restaurant, I wanted to try creating somewhere that links the producer and consumer through food. As well as ingredients like seasonings and vegetables that I’ve come across around Japan, there are books here relating to food and hand-made bowls. We regularly hold workshops too here, to which we invite producers. Each vegetable and each seasoning holds the fervor and life of the producer, which is there for you to encounter. I wanted to convey what lies behind those things, not just sell them as mere objects. I also wanted to create a point of contact between people and society. For example, a patisserie setting up shop in a small town improved the town’s safety, and a Tonkatsu restaurant on a school route has helped with safe-guarding in the area. I’ve come to think that urban development and people’s daily lives are something that cannot be severed. I myself, too, as a chef, was always searching for a point of contact with society, and continually thinking about the meaning of my existence in the town.

Q. It’s a very precious thing to be able to see and touch soil like this right in the center of the city. This garden-in-the-air-like growing patch is open to anyone, and as such is very much a point of contact with society.

A. When I was told about it, I initially asked, “Let me create a growing patch”. While running a growing patch, you have to tend to everything, and I felt that it showed respect and consciousness towards the place. Alongside groceries are vegetables, seasonings, wines and even bowls: all things that cannot be created without good quality soil. Every item is very much linked by the keyword “soil”. That is why I wanted the interior of the shop to be a place to actually see and touch soil. Here we make compost from the throwaway scraps of organic vegetables, gather seeds from herbs and fruit bushes grown in that soil, and try to achieve a natural cycle in the one same space. In order to make this good quality compost, the children of our staff have started a “kitchen scrap group”, so that little circles of green like this are emerging in various places, showing what a city can do.

Q. What do you think that nature in the middle of the city brings to people?

A. It reminds people that they are human. I think it unintentionally changes consciousness. I too always find that I receive energy and learning from nature. A farmer taught me that the Chinese character for “soil” (土) is written with the signs for plus “+” and minus “-”. In other words, that means “zero”. When that becomes zero – flat – it makes people think how they should live. They grow food in soil, light fires and live near to water. I would like to get close to that very primitive, but beautiful, way of living.

Q. It takes quite an effort to face a new challenge involving people from the local community, but it’s also worthwhile. How do you think urban development should be from now on?

A. By real estate businesses and the local community cooperating with just small requests on an individual level, we were able to realize the splendor of giving rise to new attempts like this one. I once heard that a town in Japan is created over a period of around 100 years. Generations gradually change, making it possible to achieve urban development itself under new perspectives like ours. I think it’s a good example of that here too. In the same way that people of the past created a town imagining it 100 years on, we today are also creating places imagining them 100 years in the future. Don’t you think that’s a fascinating thing?! Something that can’t be done in 10 years’ time, or couldn’t be done 10 years ago – but that can be done just now – surely exists.

Q. What do you think will go in search of MIDORI (greenery) in the New Normal from now on?

A. I’d like to think that from now on, we will not seek MIDORI (greenery), but serve to repay the green by “growing”. I believe that a reconsideration of the soil, sun, wind and water that create green, in other words, the environment as a whole, will continue to link to the future to come.