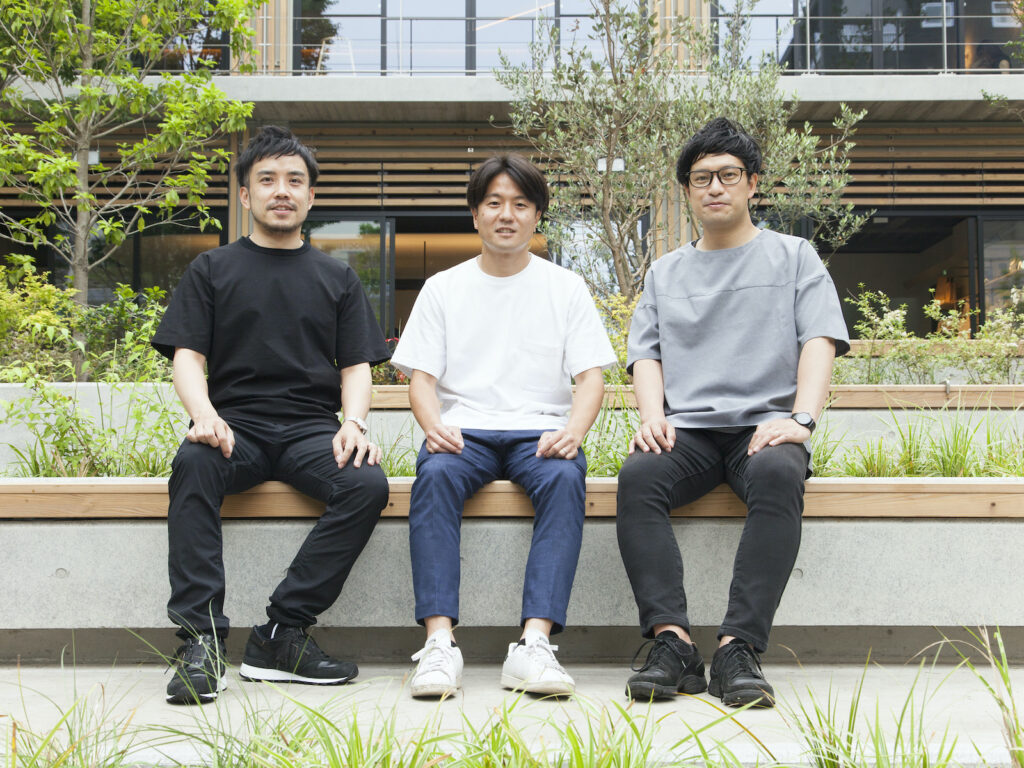 Since its founding in 1900, Nikken Sekkei has been an active creator of Japan’s urban landscape through architecture. Here, a trio of the company’s specialists talk about the role of public spaces and green areas. Their work: new projects to bring about social and spatial innovation based on “the activities of people to enhance the appeal of the city.”

Mr. Ito: Parks used to prohibit many kinds of activities, making it difficult for spontaneous activities to start. The “Tokyo Midtown Design Touch” exhibition was held there every year, but most people came with the intention of viewing the exhibition only. We thought hard about how to increase the time people spend in the Grass Square on non-viewing activities. First, we replaced the noticeboard that normally lists banned activities with those that were acceptable, like playing catch or enjoying time with a pet. We also prepared four large shipping containers as “free spaces,” with their contents to be used for generating activities such as art galleries or even showing films.

Mr. Sobue:  We also provided adaptable, free-use furniture modules. People handled the chairs, tables, tents, etc. without any instruction, resulting in even more use than we imagined. Design Touch never saw more visitors in its history than it did during this time.

Q. Didn’t “Park Pack” lead later to the idea for “Your Park” in Shibuya’s Kitaya Park in Tokyo?

Mr. Ito: After the creation of Tokyo Midtown Grass Square and Miyashita Park, I learned to consider how to ensure that the value continues to grow. In one sense, it is finished once the construction work is done, but its future value is largely determined by how it is operated. So, I proposed to our firm a new venture that would participate in the running of Japan’s public spaces, an idea which was eventually adopted. Kitaya Park represented the first stage. Three private companies, including Nikken Sekkei, have been commissioned by the local government as designated managers. We run the park.

Mr. Ueda:  In simple terms, the aim of Your Park is to turn underutilized municipal spaces into fun places for people to use. The role of public spaces has changed due to the COVID-19 pandemic. I think an increasing number of people are strolling within walking distance from home or work in the city’s empty spaces. But I also wanted those spaces to be used more broadly. Your Park was named with the idea of “using it for one’s self.” That was our starting point. As a trial, stalls were set up in Kitaya Park using units called Tsunagi* (lit. “linked with wood”) that anyone can easily configure and move, allowing for markets, music events, and the like to be held. The concept of Your Park is to take unused empty spaces, such as parks, etc., and link them up with store outlets or people who want to hold cultural activities.

Q. Affording users the freedom to use furniture modules and Tsunagi units is a unique idea, yes?

Mr. Sobue: I have sensed a trend recently, in public spaces and in offices, for operators and designers to leave fixed usage formats unsettled, allowing “blanks” for active user involvement.

Mr. Ueda: A blank space carries an image akin to an empty notebook. However, a notebook with lines allows for free writing, as the lines act as guides; that is the important thing. I grew up in a multi-unit apartment complex in Kobe. We called the narrow streets between the buildings our “park.” I remember practicing soccer there with my friends and pretending that the inner space surrounded by tree branches was our secret den. Thinking about it now, my life story is inseparable from public spaces. In a broad sense, my experience using public spaces years ago may serve as a link with the work I do now. I hope that creating special spots and green solutions in parks, along with the Park Pack modules, will help people to create their own stories.

Mr. Ito:  In Kitaya Park, there is a wide, empty space, with holes in a section of the ground for inserting poles. Usually it can be used freely as a park, but when an event is held, the poles can be secured to Tsunagi units. Within the blank space, stalls are drawn like lines in a notebook; from there activities among people emerge.

Q. How do you see the role of urban green areas and their future in the Umekita 2nd Project, which is set to become a prime green space?

Mr. Sobue: To have such a vast green area in front of Osaka Station is, by itself, of immense value, I think. Just being surrounded by greenery allows for unconscious refreshment.

Mr. Ito: I myself go walking with my children in the woods near my house. I discover something new each time. I think it would be even more fun if there are things or events in parks that parents and children can enjoy.

Mr. Ueda: We tend to think of green areas as merely tools for relaxation. But I hope we can look further into the future and spend time discussing, along with the local people, what kind of “mori” (lit. “a shrine grove”) to create. For example, although the Meiji Jingu Shrine was created artificially, it is now a splendid park with its own ecosystem. I hope that the Umekita 2nd Project, too, will become the kind of landscape that will remain engraved in peoples’ hearts.

Mr. Sobue: Wouldn’t it be nice if developers didn’t prepare everything to perfection, and instead the greenery was planted by its users? At the park near where I live, local people water and tend to the flowers, which is really reassuring. It’s great to see residents get involved, rather than having all responsibility fall to the local government.

Masato Ito
Mr. Ito joined Nikken Sekkei Ltd, after graduating from the Department of Urban Engineering, Graduate School of the University of Tokyo, in 2008. He has worked for domestic and overseas public space-related projects, including urban design and planning. Since 2018, he has been involved in design projects for public spaces, from planning to operations.

Kazuhiro Sobue
Mr. Sobue started at Nikken Sekkei Ltd, after graduating from Yokohama National University Graduate School of Architecture in 2009. At the firm, he has been involved in domestic and overseas design work in architectural design. From 2019, at NAD, he has been engaged in activity design and project management, in public designs and workplaces, etc. His projects include Shibuya Scramble Square, Tetsumichi, and the Woven Planet Group’s Nihonbashi Office.

Takaaki Ueda
After graduating from Tokyo University of the Arts, Department of Design, in 2006, Mr. Ueda worked in product and public space design at GK Sekkei Inc. Joining Nikken Sekkei Ltd in 2017, he has been involved in the activity designs of such projects as Toyama City LRT Total Design, Tetsumichi, Park Pack, and Mikkeru Minabun.