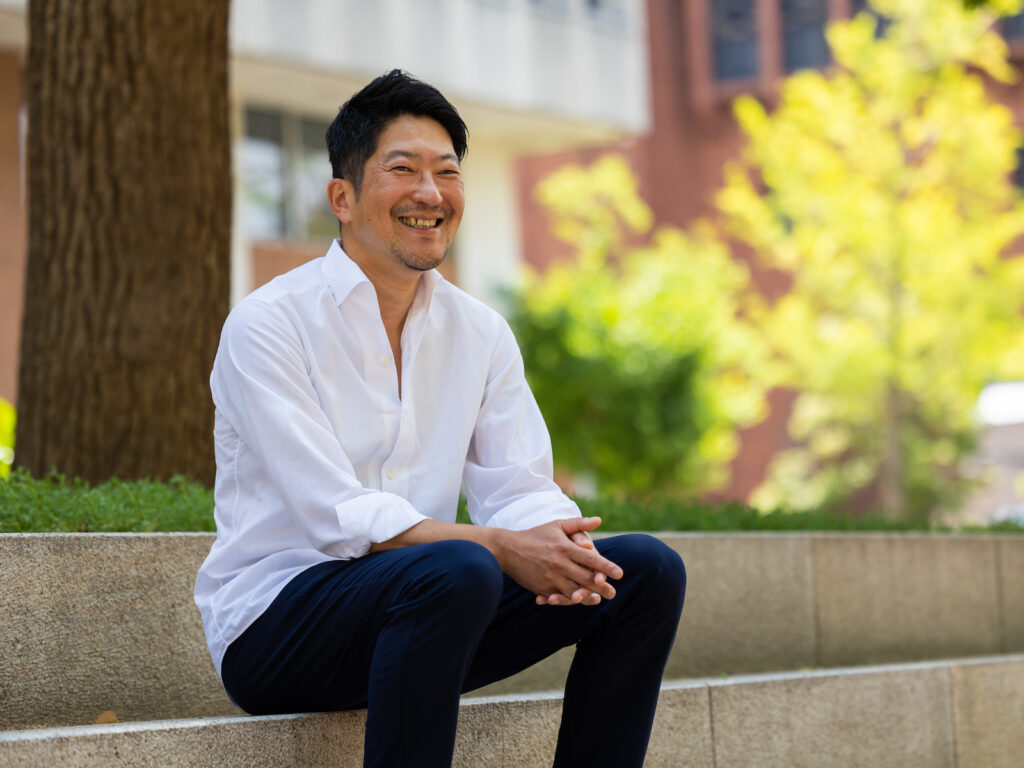 Katz Miyahara, a native of Hyogo Prefecture, graduated from the Kyoto University Undergraduate School of Global Engineering and then studied abroad at the University of Pennsylvania Graduate School of Design majoring in landscape architecture. Later, after working in several architecture firms, he joined Gustafson Guthrie Nichol (GGN) and took part in various projects overseas. On returning to Japan in 2010 he worked at an architecture firm in Japan, and presently teaches at the Kindai University Faculty of Architecture, educating his students on landscape. I asked him about landscape works abroad and the future of landscape in Japan.

Q. What circumstances led you to study landscape design in the United States?

A. I studied environmental and civil engineering at the Kyoto University Undergraduate School of Global Engineering. My classmates finished graduate school and found employment, but I had long been interested in architecture and decided to study it, thinking I’d use the opportunity to study abroad. I researched places to study and found majors in landscape at US universities ranging widely from working with public spaces to carrying out environmental design, and thought that sounded exciting. It was around the year 2000, and there were still few places to study that in Japan so I had no experience of studying landscape. I began to study landscape because of the chance to study abroad.

Q. It seems it was your wish to work at Gustafson Guthrie Nichol (GGN) from the time you were studying, and what was the reason for that?

A. As a graduate student, I was taken to various places on field trips with my teacher, and on our visit to New York, I was stunned by an open terrace at the American Museum of Natural History. The shallow water feature was very impressive, and I learned that it had been designed by Kathryn Gustafson, a co-founder of GGN. I happened to see it, the first work for Kathryn in the United States, just after its completion. I had seen works by various people up until then, but I found the subtle and detailed design in her work extremely beautiful. While landscape is often not so detail-oriented compared with architecture, it was elegantly designed down to the last detail; the overall atmosphere too was wonderful, and it sent shockwaves through me the moment I saw it. From then on, I knew I wanted to work under her direction, and after graduating I applied many times, but there were no openings at that time.

Q. Your dream came true when you entered GGN in 2005 and you participated in various projects, but is there a work you were involved in that is special to you?

A. I couldn’t give up on working at GGN, and I approached them many times after that. I was eventually invited to join them on a new project––a plan to renovate the courtyard between the Smithsonian American Art Museum and the National Portrait Gallery in the historic Washington, D.C., building housing them.
I was able to get involved from the first stage of designing the landscape below the undulating glass canopy designed by the British architect Norman Foster, and I learnt a lot from the experience. I have no memory of hardships from that time; it was all just so exciting. I was very satisfied devoting all my energy to tasks without any sense of it being work.

Another project was CityCenterDC, a mixed-use development in downtown Washington, D.C. Unfortunately I had to return to Japan before its completion in 2012, but I was the one responsible for this waterscape design. We cut two types of rock, marble and granite, in layers to form a water-like pattern using a 3D printer.

Q. Why do you think GGN has such a high reputation globally?

A. The most distinctive feature of GGN is their thorough and detailed researching of the history, climate, natural environment and ecosystem of a place, and designing landscapes that unfold from there. None of their projects look the same, each featuring an individual design. Having said that, there are never any overdone designs. For example, there are many firms that turn out the same styles in whatever place around the world. GGN, however, creates designs that very much suit the place and seem to fit in with it. They present the designs that they have created following very thorough research, explaining very logically as to why they are so, and successfully persuading their clients. What I also find fantastic is how they create designs paying attention to every detail. For example, in the Smithsonian American Art Museum courtyard just mentioned, we installed long, narrow white marble planters-cum-benches, and by rounding the corners of the marble and forming reverse trapezoids, they were designed to accommodate your legs when sitting. They were created with the comfort of seated visitors in mind.

Q. When you returned to Japan, how did you feel about the landscape field in Japan compared with overseas?

A. I returned to Japan in 2010. I think it was when landscape was beginning to be talked about in Japan too. At that time I was working at an organizational design office, and work particularly in landscape began to increase. Of course, the concept of landscape existed in Japan even before I went to the United States, but it was limited to a very small section of people. Then, during the 10 years I was living in the United States, it saw a steady rise, gradually finding its sphere of influence, which seems to have exploded over the last 10 years. There used to be almost no books on the subject, but now they have increased a lot. In that respect, landscape has become a major field.

Yet there is still a sense of feeling the way. Landscape is not constricted to one area: there are people who design the venue, as well as people who take a more overall environment approach with workshops and activities to vitalize the place. In the United States, for students like me with no background in design, there is a 3-year graduate program specializing in landscape to learn the necessary specialist knowledge for a landscape architect that includes the environment of green areas, planting, history, etc. I hope that the next generation of youngsters will soon appear, but it is difficult to teach them to that extent under the present education program, and I conduct it using trial and error in many areas.
At Kindai University Faculty of Architecture, too, where I teach, not surprisingly, almost all the students enter to study architecture because they like architecture. There are many students who have never even heard of landscape. For such students, I carry out educational activities to convey the importance of landscape. On a field trip to the gardens of Kyoto, there are many students who have enthusiastically studied the architecture of the temples and shrines, but who have never looked at a garden before. I begin by teaching them that garden and architecture cannot be separated and are a unified whole.

Q. What was the response when you asked GGN if they would lend their efforts to the Umekita 2nd Project?

A. It would be the first project in Japan for GGN and I was worried about whether or not they would accept it, so before any official offer I asked just Kathryn in private. Then, the next day I heard from GGN senior associate Makie Suzuki, “The whole staff have already been told” (laughs). “We’re moving full-speed ahead.” I was relieved by the positive feelings from the start. Kathryn loves Japan, and when I started up my own firm I had asked her to be my mentor, which she kindly accepted. For that reason, following work in Hong Kong or Singapore, she would often call into Tokyo on her way back to Seattle.

Q. Which country stands out in world landscape design?

A. The United States and Australia have many examples of large-scale landscapes, and in Asia, China and Singapore are working on urban development with a green emphasis at its core as national policy. In Japan, there is great anticipation surrounding the Umekita 2nd Project where GGN has been centrally involved in the landscape work. I believe it will be an example to heighten interest in landscape, and draw attention from around the world.

Katz Miyahara
Associate Professor / Landscape Design Lab, Department of Architecture, Faculty of Architecture, Kindai University; US licensed landscape architect (PLA); Director of FlipLA. Born in Hyogo Prefecture. Graduated from the Kyoto University Undergraduate School of Global Engineering; completed a master’s degree in landscape architecture at the University of Pennsylvania Graduate School of Design. Registered at StoSS LU and GGN; returned to Japan in 2010. Worked at an architectural design firm in Japan, then assumed his present position.