Designing beyond physical forms to include systems for sustainable management 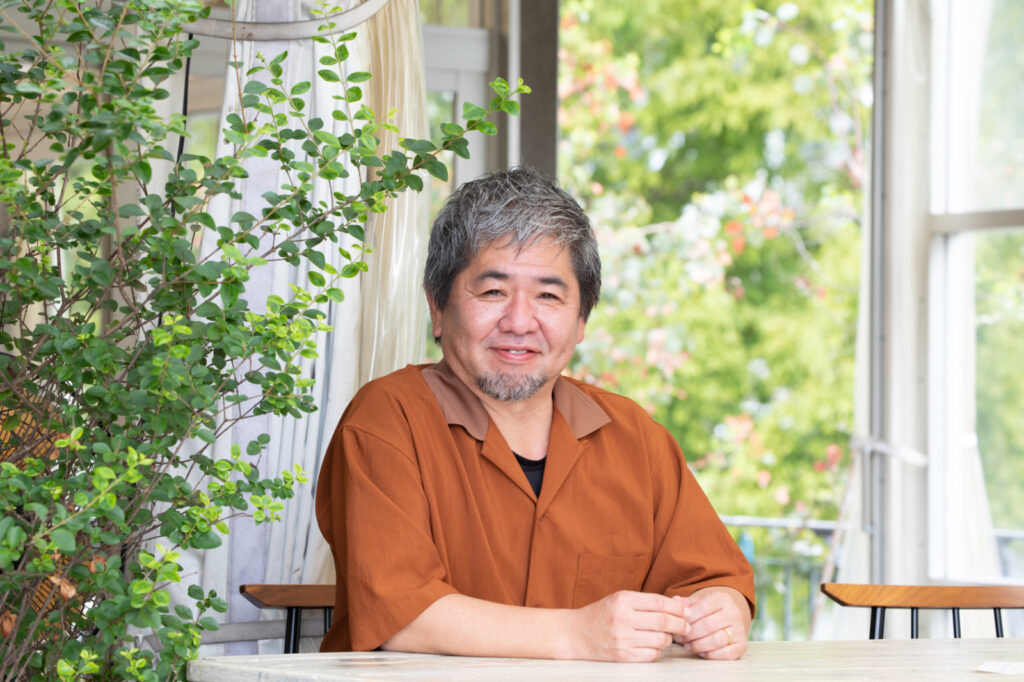 Mr. Hiroki Kutsuna, a partner in E-Design Inc, is a landscape architect and town planner. Involved in the public design of riversides, parks, plazas, and roadways, he is active, working together with citizens, from the proposal stage to the setting up of final systems. He also had served as a producer of the Water City Osaka Festival. We asked him about the nature of public spaces from now on.

Q. What led you to decide to study landscape?

A. Although I am now involved in various public spaces, originally I found public bodies, schools, and so on to be hard to get along with. I just felt that they were dictatorial. Yet when I was considering my future trajectory, I found out that it was possible to design public spaces, too. When I knew that all public spaces are designed by someone, townscapes took on a completely different aspect for me. It was then that I decided to study Urban Landscape Planning and Design at Osaka Prefecture University.

Q. After graduating, you were employed at Ohtori Consultants Environmental Design Institute, and then you started up E-Design.

A. It was the Great Hanshin (Kobe) Earthquake in 1995 that led me to go independent. Around half of the 70 shops in the Dainichi 6-chome shopping mall in Kobe had closed due to the earthquake. We volunteered our ideas to the mall for its revival and revitalization. It was then that a proposal for redoing the roof of the arcade came under discussion. However, we thought that regeneration of the local community was more urgent than the arcade. So, to foster communication, we held events suggested by elementary school students, namely a ceramics market and an event for the repose of souls involving the lighting of memorial candles. There was also the “Single-character flags” project. Citizens responded to the request for a single Chinese character expressing a good thing about their town, which were put on flags and hoisted up in the shopping mall. People gathered there, including children who came with their parents, to say, “That’s the character I thought up!” and that stirred up feelings of pride among the shopkeepers, too. First and foremost, rebuilding the arcade roof would have needed 500 million yen, whereas one flag cost 50,000 yen, so the whole event was held at the low cost of 550,000 yen.

By encouraging citizens to get involved in a personal way, and creating a series of mechanisms likely to result in the creation of community hubs, the shops that had halved in number returned to a level of around 70-80 percent. The physical form, operating mechanisms, and ongoing action need to be handled at the same time in the design of a place. It is not a matter of creating a physical format and simply passing it over to citizens; I thought about how a landscape that includes urban development is necessary as a base to support that, and so I decided to become independent.

Q. Wasn’t this kind of mechanism also brought to life at the Water City Osaka Festival?

A. Since the 2001 urban revival project, the city of Osaka and Osaka Prefecture have collaborated in working on the concept of the revival of Water City Osaka. The Water City Osaka Festival 2009 was a symbolic event realized through collaboration between city, prefecture, and private companies, and I led the design of the venue. The festival, themed on art and participation by citizens, enjoyed great success and led to the decision to keep the festival going for two consecutive years from 2011, with Mr. Ryo Yamazaki working with me as community designer alongside Mr. Hideaki Izumi as urban planner. We approached around 2,000 groups in Osaka, and by matching together people who wanted to be involved with those in need, and getting all of the groups to carry out their activities on the same day, we created a mechanism that brought the whole of the city to life. In 2013, the festival became the responsibility of Water City Osaka Partners (General Incorporated Association), which promoted the activities of the festival and such efforts as the revitalization of the waterfront area. In seeing such activities, I was convinced that an intermediary support organization, with collaboration between government and citizens, was just what was needed as a base for urban development.

Q. What was the focus of your efforts in the Kusatsu River Ruins Park, completed in Shiga Prefecture in 2017?

A. The project was to turn the disused site of Kusatsu River into a park, and I focused on getting citizens involved, while remaining conscious from the start of the important trio of physical form, operating mechanisms, and ongoing action. I set up the organization Kusanekko as a volunteer, and used workshops as a way to begin reflecting citizens’ ideas within the park’s design. While you can’t create a good space purely by dropping into a design the ideas that are raised in this way, I think that if you design a diverse space cleverly combining the three elements of landform, tree density, and land texture, you can give birth to a place where any activity can be accommodated, and anyone can find something that they want to do. And so, I designed it as a park which could be enjoyed by both children and adults, each in their own way, with an event venue and a forest garden with a flowing stream. Kusanekko was already active while the park was still under construction, so when it was completed, community activities were already thriving, and citizens continue to take responsibility for some of the park management and operation today.

Q. Sennan Long Park opened in 2020 on the shore of Osaka Bay opposite to the Kansai International Airport, which is built on an artificial island in the bay.

A. Empty land along the coast, unmaintained for a long time, was loaned free of charge by the government to a private developer, and the integrated park and commercial facilities formed Sennan Long Park. We took the lead in the design, with the aim of creating spaces for experiencing activities and features unique to this place. We worked hard in every detail so that users of the stores and park so near to the sea, as well as the sports facilities, could make full use of the surroundings and spend a pleasant time there. Thanks to its location with its excellent view, in only its second year of opening this urban park welcomed 1.6 million visitors. The government, private companies, and citizens active there work together to support the public space—I think that is the true meaning of “public.”

Q. Does the city of Osaka have the potential for public spaces like that?

A. I think that those kinds of spaces do exist. The Park-PFI system solicits private sector entities to carry out park maintenance. Yet we were already doing that even before Park-PFI was established. Also, up till now, the selling of alcohol, displaying of advertisements, and placing of terraces and chairs on the street were regulated by the Road Act, but in 2020 with the Improving Pedestrian Convenience Road System (Hokomichi), those standards were relaxed in order to create a more lively street scene. Social experiments like making a park of Mido Suji Street have been ongoing. Starting with the popular alcohol street sales, limited to one glass per person, the success of this experiment is the result of moving forward one step at a time.

I want public spaces to be places where you can see the faces of their creators. We had children take part in the urban development workshops, too, and seeing the adults happily being engaged will, I hope, help these children to see their future selves, too. For that, I feel the whole process must be accessible, and citizens need to get involved and take responsibility for the administration of such spaces.

Q. What are you looking forward to in the Umekita 2nd Project?

A. I think that the park at the center of the Umekita 2nd Project, which is developing the area in front of Osaka Station, is a symbol of the working together of the three parties of businesses, local residents, and visitors. I always put care into designing a people-centered landscape that will become beautiful for the first time when people come to it. If more people who see that scene think, “I want to be part of that,” then the attractiveness of the townscape, too, will continue to increase. I hope that the Umekita 2nd Project will create a richly green and beautiful people-centered landscape, and I anticipate it becoming the model for development projects to come.

Hiroki Kutsuna
Born in Osaka Prefecture in 1966. Landscape architect and urban planner.
Involved in numerous projects bringing new meaning to the “public.” Strives to make the most of a given space to create attractive public spaces when designing parks, plazas, roads, and riverscapes, while at the same time devising methods for their sustainable management. Also widely active in Japan and overseas in the field of landscape design for universities, hospitals, schools, businesses, and housing. Literary works include How to Design a Public Space (editor; in Japanese). Awarded the Ishikawa Prize of the City Planning Institute of Japan for “Water City Osaka Urban Development” (2016) and the Minister of Land, Infrastructure and Transport Prize of the 33rd Urban Park Competition Specified Theme Division for “Kusatsu River Ruins Park (Section 5)” (2017), as well as many other prizes.