Connecting Osaka and the New Urban District. What is the vision for the landscape that GGN is creating for the Umekita 2nd Project? 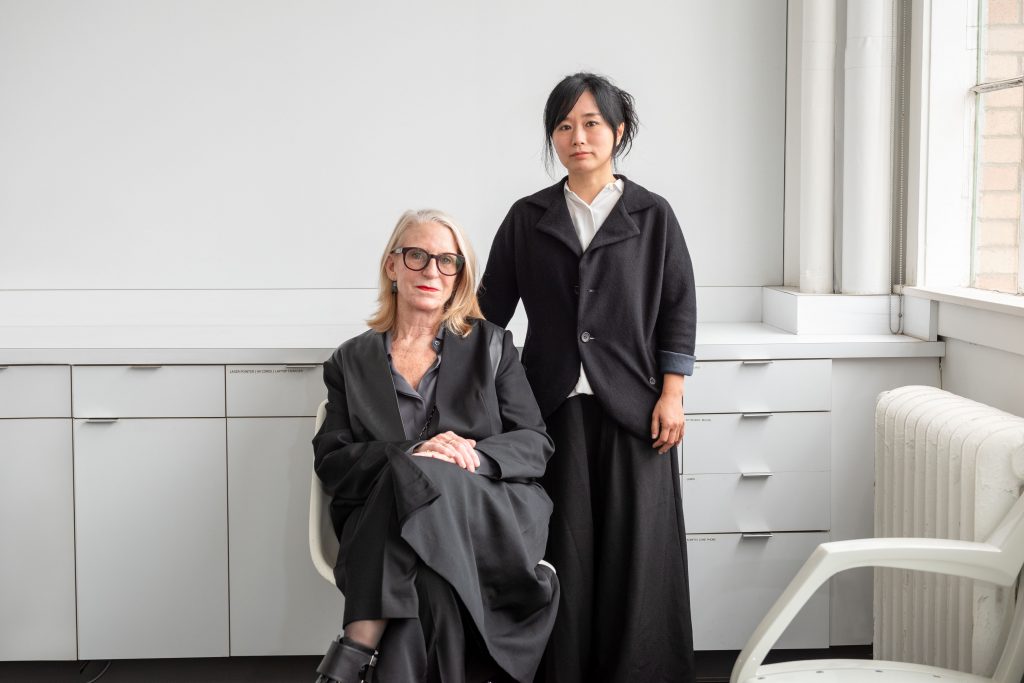 “Umekita 2nd Project”is the development progressing north of Osaka Station – I interviewed Kathryn Gustafson and Makie Suzuki of the landscape architecture company Gustafson Guthrie Nichol (hereafter GGN) about the vision of this urban development, which is a new district aiming for coexistence with nature.

The former switchyard to the north of Osaka Station will be reborn as a verdant town. The landscape architecture company GGN, based in Seattle, Washington, USA, is taking part in the development of the entire Umekita 2nd Project District. Landscape designers create the scenes of the city in which we live. Their work extends widely, as far as the design of the urban areas including parks and even the natural environment. They could be considered environmental designers, connecting cities with the natural processes, for people living and working there, visitors, and even for other animals and plants. These landscape professionals at GGN are working on various projects in cities worldwide, including in America.
“Seattle, where we live, is a town connected across the Pacific Ocean with Japan. More than anything, Japan has the historical landscape culture of the Japanese garden, so I felt a familiarity for Japan,” says one of the founders of GGN, Kathryn Gustafson.

Kathryn talks about the important thing in designing landscapes as “whatever should be considered the soul of the land.”
“We search for a suitable design for the land that inherits the history, culture, topology, natural environment and ecology etc. of the land. This time we started anew by learning about Osaka.”
The GGN team including Kathryn and GGN Senior Associate, Makie Suzuki, visited Osaka and deeply researched the memory of the site on old maps, etc., studied its natural environment and ecology, and experienced the depth of its diverse culture of food, comedy etc. During that process, Kathryn was fascinated by its history as a water city, whose industrial culture developed from water transportation.
“The people of Osaka built so many bridges that in the Edo Period it was known as ‘Eight Hundred and Eight Bridges,’ and I was drawn by that history of connecting groups of islands to create an urban landscape. The site for this project is the land that transformed from rice fields to a switchyard. This land will become a new stage for organically connecting people.”
Kathryn says that in Osaka, neighboring the well-established garden culture of Kyoto, she is aiming for a contemporary landscape where both urban functions and natural environment exist together.

“Despite being a large city, Osaka has no open spaces. I’d like to design a very free space in the center of the city where people can find their own uses for it. It should become an open place to restore connectedness with the town”.
Of the approximately 91,000 square meters of the entire site, Umekita 2nd Project has allocated half, approximately 45,000 square meters, to an urban park. In its plans here, GGN has given unique identities to each south and north parks.
“The south will have open space with lawn and trees, a space with event-holding in its vision. The north will be planted mainly with plants giving a sense of Osaka and the seasons, to create a rich bio-diversity that is lacking in the present city. Plants are not just to accompany buildings, but the plants themselves will define the new district. I mentioned Osaka’s history of building bridges over its canals: here we have borrowed from history and will link north and south with a bridge called an Inspiration Bridge (tentative name Hirameki Bridge) positioned 7m above ground. This will be something that connects Osaka’s history with the newly born town”.

After hearing the above from Kathryn, Makie continued the discussion.
“In Japan, we talk about landscape being an outside area decorating a building, but we are specialists in creating a place that connects the whole city, not merely the external surroundings of structures, but the city in its entirety. In this project, we also provided an evacuation area in times of disaster per jurisdictional requirement. We are aiming for an open space, where people could mingle freely in everyday life , so we looked at various programmatic approaches. What we are hoping for is a framework that provides flexibility. A space that you might call a large vessel responding to the diverse needs of a variety of people. Umekita will connect people’s lives, and provide the opportunities for bringing in a new vision. That’s the kind of place we’re hoping to create.”

GGN will choose carefully selected materials for the Umekita landscape. Stone masonry is scheduled to be featured, giving a contemporary expression to Japanese craftsmanship.
“We put importance on elements that connect people to the roots in which they feel pride. Japanese paper and textiles are also outstanding, not just architectural techniques, and we can also sense a unique design consciousness rooted in Japan within contemporary fashion etc. That is what you might call the DNA of Japan, the identity. We questioned what is the identity of Osaka during the process. GGN is hoping to realize a contemporary, liberating public space that anyone can enjoy, while revering traditional inspirations seen in Japanese gardens,” Makie said.

In 2024, the project is scheduled to have an advanced opening, but it will be a little longer before we see the truly completed landscape with planting as core materials .
Makie went on to say, “Landscape is something that manifests through the connection with people. It is a manmade space, even with natural elements. For that reason, it is important to have suitable management, and watching the balance of the whole, we predict that we will see one phase of ecological completion every 20-30 years. GGN ‘s designs always emphasis of the dynamism of nature. The environment changes more dynamically than people think, and it is important that people see themselves progress too. For example, the consciousness of people of 50 years ago, in the 1970s, was very different from that of us today in the 2020s. What will we be like by 2050? GGN hopes to create a landscape that contributes to that shift”.

At the end of the interview, Kathryn told me of her love of the work of the British artist, Joseph Mallord William Turner. In the well-known landscape works of Turner, there is a foreground, middle ground, and background. Although the focal point of those paintings with their sense of depth is vague, there is a continual sense of anticipation that something is there. She says what she would like to create in Umekita is a space full of anticipation like the landscapes painted by Turner.

Gustafson Guthrie Nichol (GGN)
Landscape architecture company founded in Seattle in 1999 by three landscape architects, Jennifer Guthrie, Shannon Nichol and Kathryn Gustafson. They handle projects in cities all over the world from their studios based in Seattle and Washington D.C. In 2017 they received the National Landscape Architecture Firm Award of the American Society of Landscape Architects. GGN has designed numerous renowned landscapes, including the “Lurie Garden” in Millennium Park in Chicago and the “National Museum of African American History and Culture” in Washington, D.C., USA.