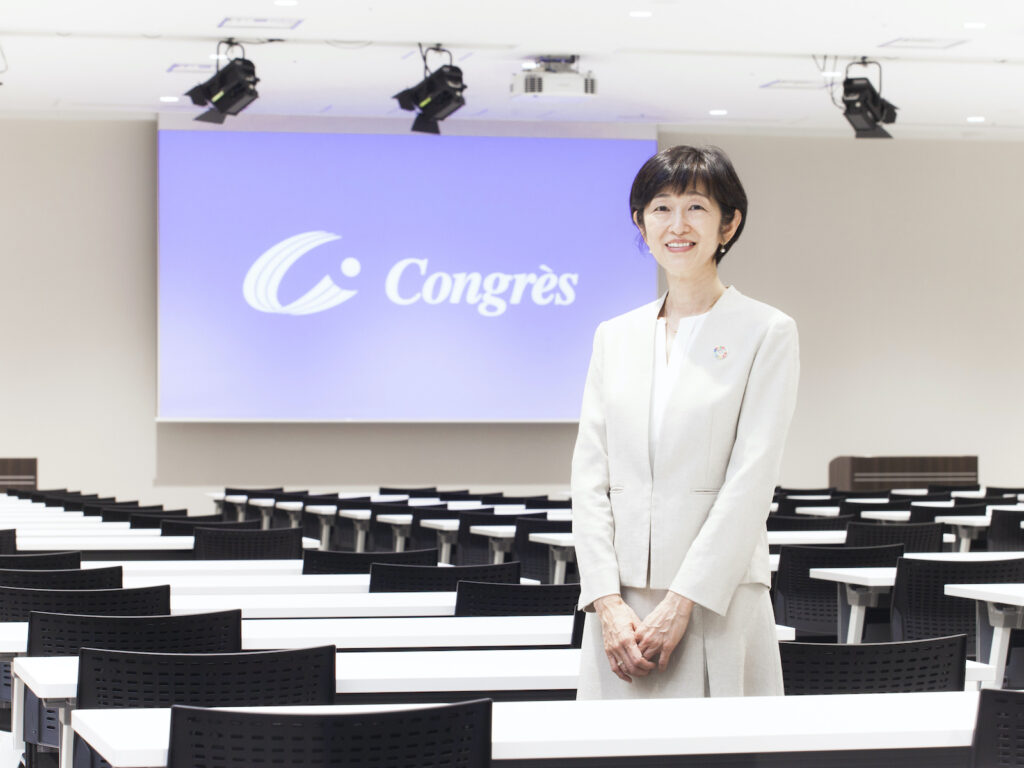 Congrès Inc. is involved in the management and operation of conference venues and halls, cultural facilities, and other spaces throughout Japan for the holding of conventions such as international conferences and academic meetings. The president of the company, Ms. Noriko Takeuchi, talked with us about how the company developed a convention center in the Umekita early development district, and the expansion of its activities in the future Umekita 2nd Project core facilities etc. in the Osaka area.

Congrès Inc. has been involved in organizing numerous historic conferences, including the 34th G8 Hokkaido Toyako Summit in 2008, the Tokyo Annual Meetings of the IMF and the World Bank Group in 2012, and the 42nd G7 Ise-Shima Summit in 2016, as well as large-scale exhibitions and events, business meetings, and more. When it was first founded, the company was engaged mainly in organizing conventions, However, in recent years, it is an industry leader as a full-service MICE*––Meetings, Incentives, Conferences and Exhibitions––business. Its president, Ms. Noriko Takeuchi, first became interested in the meetings industry through part-time work while at college. “It all started when I found some part-time work at an academic conference from the university notice board. I was very attracted to such work where I could meet and talk with people from various fields. Later, even at the first convention company where I was employed, I found it very exciting to be involved in “news work.” Getting acquainted with social issues such as politics, economics, and medicine, through my work served to stimulate my sense of curiosity.”

Ms. Takeuchi established Congrès in 1990 along with some 20 colleagues. From its inaugural year, the company was engaged in work for the Osaka aquarium Kaiyukan and the International Garden and Greenery Exposition. Presently, it operates over 90 facilities across Japan, including its own facilities, public facilities for which it has been commissioned as the operational manager, and facilities under contract with private companies. “When Nagoya City made the decision to solicit for a manager for the Nagoya Congress Center in 2010, we were the first to raise our hand. Since the successful invitation of the “All-Japan Band Competition of Junior and Senior High Schools” to use it as the venue in 2012, the Century Hall at that Center has become known as something of a band mecca. Last year, due to the COVID-19 pandemic, the competition was canceled, but we streamed the performances by five senior high schools that are regulars at the national championship, and sent messages of support countrywide, to which we received a great response.” The primary role of MICE is not just to provide venues, but also to support social communication when local governments and private companies work in alliance with sponsors, says Ms. Takeuchi.

In recent years, Congrès has been actively opening its own meeting facilities. Its Knowledge Capital Congrès Convention Center in the district of the earlier stage of Umekita development, was opened in 2013. Being the greatest in scale among the company’s various venues, this Center contains a 1,700 square-meter hall and nine conference rooms. This venue, together with the MICE facilities in the Umekita 2nd Project that is scheduled to be opened in the future and, the future Nakanoshima’s International Hub for Healthcare Innovation, are evidence of the desire to promote Osaka as a new brand. “Recently, the term ‘Area MICE’ is popular. Rather than ending up being just a conference at a facility, for an attractive place like Umekita, it can be combined with other events being held there to create various experiences and encounters. I would like everyone who visits here to take home with them as many experiences as possible that are born out of the special characteristics of the city.” In the case of a large-scale international conference, many participants stay for nearly a week. During that time, they can go running or use the leisure facilities in the Umekita 2nd Project district that comes with abundant greenery. Such an ideal environment creates added value for the area, says Ms. Takeuchi.

Since Ms. Takeuchi is an Osaka native herself, Osaka holds a special place in her heart. “The people of Osaka have a real can-do spirit. In business, too, it is important to bravely accept a challenge without fearing failure. The EXPO 2025 Osaka, Kansai, Japan is drawing near. Of course, making the actual event a success is the prime consideration, although we should also be thinking about its legacy. We are presently involved in studying methods to connect the convention center to the next stage.” In the Umekita 2nd Project, the conference hall, to be constructed inside the building with direct connection from the station, is located in a prime area to attract visitors. Through cooperation with surrounding commercial buildings and facilities that promote innovation, says Ms. Takeuchi, they hope to encourage a more unified urban development, rather than ending up as separate dots on a map. “Osaka is a metropolis that has an international airport, with its business communities and local government united in demonstrating its regionality. Conferences in Osaka, accompanied by sightseeing in Kyoto, Nara and Kobe, will surely help promote everything that the Kansai area can offer. From a mid-to long-term perspective, I hope MICE can be used as a strategic tool to boost the Kansai region.

Ms. Takeuchi is active beyond the meetings industry, she also serves as the President of the Japan Convention Management Association and Vice-Chair of the board of councillors of Keidanren (Japan Business Federation). The global economy is currently struggling under the COVID-19 pandemic. I asked her about Japan’s future role. “Japanese people are said to rate their own country low, but now, during the COVID-19 pandemic, Japan is ranked high as a place that people outside of Japan want to visit. There are a number of sectors that are attracting attention, including manufacturing, culture and nature. Therefore, we should feel more confident. We ought to take the initiative and actively communicate our good points to the world. If you consider Japan’s relationship with the US and China, and its location in the Asian region, I think Japan is well-positioned to play a significant role in international cooperation.”
Recently, Congrès has been working toward building overseas connections, for example holding a sports business exhibition and seminar building on an encounter with a UK company. Once the pandemic ends, the company will extend its antennae further out, within and outside Japan, to catch business chances, so as not to fall behind in global competition. Ms. Takeuchi wants to keep her eye on MICE business as it continues to operate on the forefront of the times. She realizes the need to actively communicate the richness of Japan to the world, and is exploring all methods for that purpose through meeting in person at physical venues, holding virtual meetings online, or the hybrid of the two.

Noriko Takeuchi
She is a graduate of the School of Human Sciences, Osaka University. In 1990, she took part in the founding of Congrès Inc. She has been engaged in various domains of work for international conferences, including summits and expositions and the running of MICE facilities such as the Knowledge Capital Congrès Convention Center, as well as cultural facilities such as theaters, science museums, and aquariums, plus tourist facilities such as observatories. She was appointed the president of the company from June 2013. She was also appointed the President of the Japan Convention Management Association, Vice-Chair of the board of councillors of Keidanren (Japan Business Federation), and Chair of Keidanren’s Committee on Tourism.