〈Part 2〉Two entrepreneurs whose paths crossed at Knowledge Capital and who are leading the way to future Osaka. 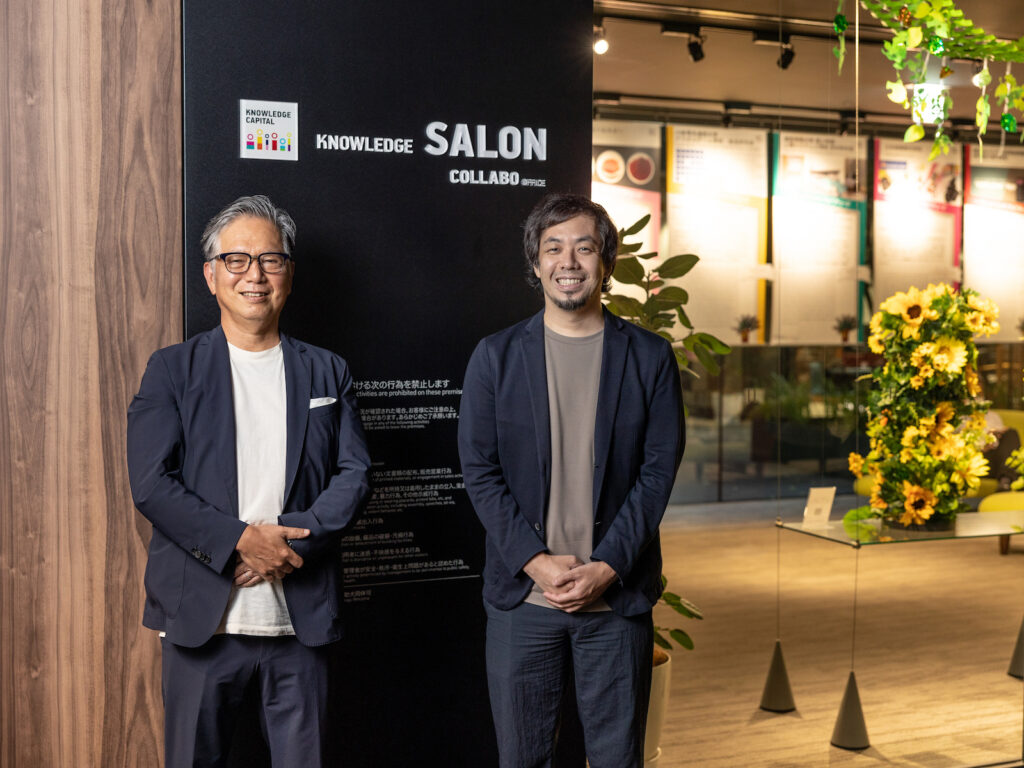 Grand Front Osaka is a complex consisting of three areas: the South Building, the North Building and the Owner’s Tower. Knowledge Capital, located in the North Building, boasts an array of spaces. These include the private Knowledge Salon focusing on exchange, The Lab.­­­­––The world’s best laboratory for everyone by everyone––for displaying the results of collaborations and project activities, and SpringX aimed at supporting practical learning and startups, as well as groups of showrooms, large and small offices, rental conference rooms, and a multi-use theater.

The job of Mr. Takuya Nomura, General Producer, entails the overall planning and operation of the activities at Knowledge Capital to encourage exchange among all the organizations and people involved there. The work is wide-ranging: as well as project planning for various events and awards involving the general public, it includes participating in events held by 16 international partner organizations and facilities under a Memorandum of Understanding and having them exhibit in Japan in return, giving lectures and serving as judge at the awards held by overseas organizations.

“Knowledge Capital provides the venue and support for innovation. When you say innovation, it calls to mind technology and technological innovation, but rather than that, we want to create a place for ‘knowledge innovation’ to be born, where people with diverse wisdom and ideas can gather and change society,” says Nomura. “Knowledge innovation is fairly hard to understand, so we talk about our core value being ‘OMOSIROI.’ Omoshiroi has taken on its present meaning of ‘interesting’ relatively recently, while the origins of the word, ‘things before the eyes suddenly becoming bright,’ allows us to consider on a daily basis what activities we can do, what services we can provide, to make things bright.

In 2018, the idea of developing a new education center emerged, and 2020 saw the opening of SpringX. Mr. Takuya Nomura talks about the reasons for starting SpringX.
“Our times are witnessing great change. The structure of industry is undergoing change too. The most important thing now is learning, is education. Startups are now attracting worldwide attention. To nurture new startups in Osaka, ultimately we need a place and community for practical learning aimed at young people, such as junior and senior high school students, in order to nurture new thinking.”

There are two programs at SpringX. One is the Super School (Cho Gakko) providing courses by specialists active at the front line in various fields including science, art, culture, and business. The other is the SpringX Convection Pot (Tairyu Pot), a place where people planning startups can meet. In August 2021, the Startup Summer Festival 2021 was held online, in which representatives from 30 startup companies presented their company and appealed for backers within a time limit of three minutes.

“I want to generate more movement in the startup community. I don’t want it to be confined to only people in business, but to establish events, like summer music festivals, that everyone can enjoy, the general public and children too. And I hope startups from the younger generation can emerge from Osaka,” says Mr. Takuya Nomura.

However, he stresses that “innovation beginning from R” is the crucial element for startups and businesses alike. “Relationships are of more importance than a business model or capital. As long as you have created a relationship, your first attempt might fail but the relationship won’t crumble. You’ll think, what shall we try next? Our relationship with Mr. Takeshi Mori is like that. We don’t deal in money directly at work, but we receive his cooperation in various projects. That may be how doing business in Osaka is different than in Tokyo.”

One important feature of Knowledge Capital is its functioning as a communicator, newly linking people with people, and people with something new to discover. It displays cutting-edge technology and ideas in The Lab. in an easily understood way, and also provides feedback to exhibitors on the thoughts of the general public. Through the Knowledge Salon, it matches up its 2,000 some members in various industries, helping to catalzye the creation of new business.

Taking full advantage of this environment, Suprieve Holdings has grown rapidly as a conglomerate venture company, developing 15 business projects. Says its CEO, Mr. Takeshi Mori: “Here you are introduced to many different people––tax accountants, architects, lawyers, etc. Really, you can’t name a profession that’s not here. A venture business couldn’t wish for anything more. You can find members necessary for your business, you can hold impromptu business talks in the meeting rooms, the atmosphere is good, and the location is  outstanding. I think I must be the member really getting my money’s worth out of my membership (laughs).”
In response Mr. Takuya Nomura says with a smile, “We are the happiest when salon members are active here and can thrive.”

Mr. Takeshi Mori opened Suprieve the Works in the sixth-floor Future Life Showroom of Knowledge Capital in July of this year.

“We run 15 business projects, so we are displaying all our projects, including clothing and cosmetics, as a showroom for all to see. It is also our main office, and general visitors are free to see everything, including staff meetings and the meeting room. We are also introducing products from other startup companies. We want this to be a satellite, the startup base, of the Knowledge Salon.”

Mr. Takashi Mori continues, “We’re always talking with Mr. Nomura about the possibility of producing a listed company out of the Knowledge Salon. We’re always losing venture companies to Tokyo. We are of the same thinking as Mr. Takuya Nomura and can totally sympathize with him. Everyone who gets to about one billion yen in annual turnover goes off to Tokyo. We want to create a base for venture companies to remain in Osaka, and establish a listed company out of Osaka. Our company could be one of those companies, but on our own, that would not have such a strong impact. So, in the hope of creating a Silicon Valley in the Kansai area, we launched Kansai Valley, and gathered together 60 venture companies aiming for listing.”

“In eight years, many similar facilities have opened in Tokyo and even in regional cities. Open innovation, start-up support, co-working space––Knowledge Capital has gone about it comprehensively from the beginning. We have had numerous observers from overseas too. As a front-runner, we are always anticipating the future, and thinking about what we should be doing next. One such area is human resource development. It’s so important to educate the younger generation that will lead the future. As a place of practical learning that is not school education, we provide learning programs through people active on the front line. Another is a return to the basics of a space for creativity and knowledge exchange. More than facilities alone, that must include functions and operations, in a set.”

“We were involved in virtual formats even before the COVID-19 pandemic, and at The Lab. you can experience 3D contents, while at Super Schools you can learn online, and so on. We are also planning a program to nurture virtual talents such as YouTubers and avatars. The good thing about operating online is that you can take part from the Tokyo metropolitan area, Hokkaido or even Okinawa Prefecture; people can choose when to participate so that your target widens, and young people show an interest.” However, there is not much meaning in merely having a bustling virtual space on the internet, Mr. Takuya Nomura continues. “The original meaning of the word virtual is ‘substantial, although not appearing so on the surface.’ The true source of information is other people. The issue in becoming a true source of information––not information from the internet––is how to integrate substantial things in the real world.”

Both Mr. Takuya Nomura and Mr. Takeshi Mori also have high expectations for the Umekita 2nd Project, which will be opening in 2024.

“What comes to mind as a symbol of Osaka?” asks Mr. Takeshi Mori. “Places like the Dotonbori tourist district or the Tsutenkaku tower, not Umeda. Osaka Umeda Station has 2.5 million passengers using it every day, making it second to Shinjuku Station, but people just pass through it without noticing it, which is a real shame. We are hoping that Umekita will become a compelling presence, unique to the world and like no other.”

Mr. Nomura continues, “The greatest feature of Umekita 2nd Project is its Midori, or abundant greenery. So much open space in front of a terminus must be a world first. And although of course innovation and the creation of new industries and economic growth are important, primarily we’d like this space to become somewhere to entrust the soul. We hope it will provide a place to think beyond the UN’s Sustainable Development Goals (SDGs) for the sake of all creatures on the planet, not just humans, that it will be a place to experience and try out future alternatives, a place for everyone to take a step forward.”

The knowledge base cultivated by Knowledge Capital, and the innovations born from it, are, without doubt, proving great strengths to the urban development of the Umekita 2nd Project.

Takuya Nomura
Born in Osaka. After graduating from university, worked in an advertising agency, and then founded Superstation Inc. in 1992. Employed as General Producer at Grand Front Osaka’s Knowledge Capital in Umekita; was engaged in designing the overall concept of Umekita 2nd Project at the time of the original urban design competition; presently leads basic planning for the core function main facilities. Active over a wide range: visiting professor at Kansai University and Osaka University of Arts, strategic adviser for the Datability Consortium, judge at the French International Digital Art Biennial (Les Bains Numériques).