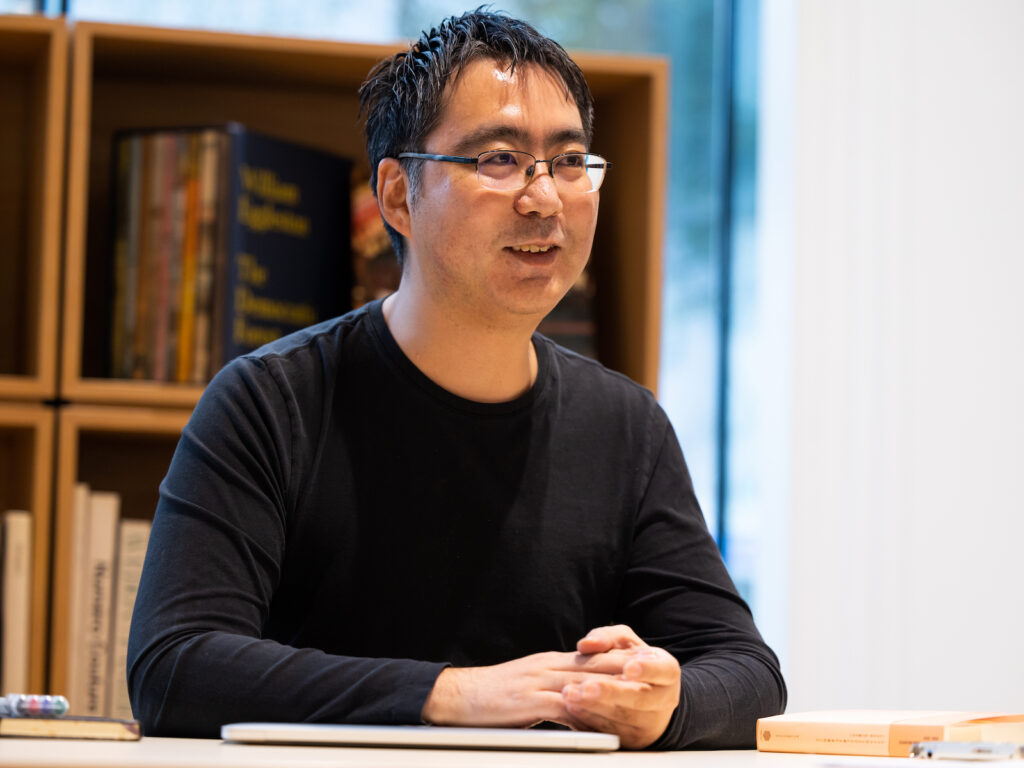 The NPO Mira Tuku, under the motto “Emerging Future, We Already Have,” works to form communities transcending individual fields––different sectors, different regions, different job types––and to create platforms to accelerate innovation. Mr. Yuya Nishimura, Representative Director of Mira Tuku, talked with us about his work to date and more particularly about the Umeda urban development.

“I originally studied psychology, and so I first entered a human resource development venture company in Tokyo, intending to make use of my base in psychology. I was involved in providing training programs in self-leadership and communication. After that, I moved to a think-tank where I worked on organizational change. It was about improving the mental health of the workplace through organizational diagnosis and transformation. But while you can approach the people inside an organization, you can’t approach those who have left it. You can always raise one group inside a sunken whole, but I gradually began to think that you also needed to work on filling in those sunken parts, and so I started Dialogue Bar (the voluntary association that was the precursor to Mira Tuku).

He founded Dialogue Bar in 2008, as something separate from his company work, as a place for conversation. “Its roots are very simple: an attempt to create a place to meet people to talk to and make acquaintances and friends other than family or work colleagues. Research and data show that people suffer and feel hopeless when they have fewer social interactions where they feel welcome and when they lack communication partners. Recently, co-working spaces have come about, but at the time, to meet new people, there were only name-card exchange meetings to meet other business people. No place existed to meet people to enrich your life aside from business or work. And Dialogue Bar came about when I began thinking we could make one ourselves.”

Dialogue Bar adopted the structured World Cafe conversational process which, at that time, had only just been introduced from overseas. “The World Cafe method was used in the field of group development, but it was we in Japan who first applied it to the completely different area of an open space like urban development. At the collective discussion events, all those who participate have their own subjective identity, so more and more people interact and gain experience and modify that identity. So bit by bit, it began to expand.” It began in Shibuya in Tokyo, was repeated in Roppongi and Yokohama, and little by little, spread its range to Osaka, Nagoya and Sendai. He even made himself unwell by being so busy, and in 2009, he quit his company job and became independent, forming the nonprofit Mira Tuku in December 2011. The Tohoku earthquake and tsunami, and accompanying Fukushima nuclear disaster, that occurred that year would also have a major impact on Mira Tuku.

“When the earthquake occurred on March 11, I was stuck in a high-rise building in Roppongi, and couldn’t get home that day. For a week after that, I worked exclusively on an online information exchange platform, and three and a half months later, when things had settled down a little, I had the opportunity for a business trip to Fukushima. While helping at an evacuation center, I saw what the situation was like at the time. One representative situation was that commodities were not being distributed despite there being large quantities of relief supplies. The reason was that large-scale evacuation centers could not guarantee enough of the same item for everyone, and the supply side wanted to avoid any trouble. I thought that if the survivors, too, could themselves do more in operating the center, then this problem would solve itself. I thought maybe friction wouldn’t arise if the community itself made its own decisions together with leaders, rather than being managed by others. So, Mira Tuku’s work began to include nurturing people to build communities, not just creating spaces for linking people with people as before.

The work of Mira Tuku can be divided broadly into three sectors. One is community-building, growing out of the original Dialogue Bar. At present, it operates an independent community with Mira Tuku membership called Room. The second is its collaboration with numerous companies in the launching of new-field ventures. “We help in starting new things in completely new fields, not new ventures. A new-field venture is, for example, the space including gallery and library that clothing manufacturer Wacoal is operating in Wacoal Study Hall Kyoto, where we are today. Wacoal is creating and operating a space here, not making a physical item like it has up till now.”

The third sector for Mira Tuku is media. In addition to books, it operates the online “Mira Tuku Journal” and the online “esse-sense” for cutting-edge researchers, a spinoff from their own platform. “You could say that the three are ultimately doing the same thing. Community-building is support for individuals, and is the same as the support for companies to do something new. That is the case in our media ventures, too. Our media provides support for new ideas by assisting advance learning for it in things like the knowledge that could form a base for it, the thinking in other industries, or the approaches being used by actual practitioners.”

Mira Tuku’s vision is expressed in its motto “Emerging Future, We Already Have.” When asked what those words mean exactly, Nishimura says, “It’s like a Zen dialogue, but is simple if you explain it. For example, if today is January 21, 2022, then something will happen in ten years’ time, in 2032. This is what everyone regards as the future, yet it does not mean that something will suddenly happen at that point; of course there is a process leading up to it. It means that this occurrence has begun at some point, and then has become evident on this day ten years on. Since the present and future are necessarily linked, there are many things that are now, at this moment, “thoughts,” but which are still unrealized. That is what we mean by ‘Emerging Future, We Already Have.’”

Mr Nishimura has been involved in many regional and urban development projects, but he has a particular reason for cooperating in the Umekita 2nd Project. “I am from Ikeda City in Osaka Prefecture, and spent both my university and graduate school years at Osaka University. I did volunteer work while at graduate school, and Umeda was the focal point for students collaborating between universities as it was located about the same distance from all the universities. And so we met in Umeda, but strangely, Umeda never proved a site for us. Although we were able to gather there, our work sites were in a different place. It has been the same since being at Mira Tuku. Osaka Station never proved to be a site. When I wondered why that was, I constructed a tentative theory that the issue might lie in its geographical conditions. Umeda could be described as being like a crossroads. Although it’s hard to hang around or dance at a crossroads, I thought a crossroads worked well as a place for coming from afar and mingling. That was when I began to think that it might be interesting to work on something like a crossroads.

Also, urban development in Osaka is said to need a different perspective due to the uniqueness of the city’s planes and lines. “Tokyo is a town whose areas of planes inside further planes share roles. On the other hand, looking inside Osaka, although related to Kobe, Kyoto and Nara, it is more a town of lines made up of joined points which are crossing; in other words, crossroads. Urban development for a town of plane shapes will not work well in a town of crossing lines. A crossroads has its own particular way of fighting. I consider that if we find that way of crossroads fighting, Osaka’s urban development could unfold further. Interestingly enough, when I was serving on the Osaka Advisory Committee of 2020, an advisor coming from a different viewpoint said the same kind of thing: “We must consider Osaka more as the converging point of the Seto Inland Sea and the current of water from Lake Biwa” and “We should consider Osaka within a radius from about Wakayama to Awaji Island.” I very much shared those sentiments.”

Making use of that uniqueness of the town of Osaka, Mr Nishimura is involved in workshops simulating the location of the Umekita 2nd Project as a crossroads.

“Talking about a location in terms of being for the people of the area, and for the area, is the simplest approach to regional development. However, if that doesn’t work, I wonder if the reverse might bring a place to life, that is, in terms of being for people not of that area and being not for that area. I am currently involved in workshops with a mix of university staff and researchers working from such a perspective. The researchers provide depth from very interesting viewpoints when looking from the citizen side in urban development. If we look at a map, Osaka is roughly equidistant from the many research institutes scattered in Kyoto, Kobe, and Nara, so that Osaka Station would be a convenient location for convening. In that sense, the Umekita 2nd Project is a location very rich in resources.”

Such a new perspective on the Umekita 2nd Project as a crossroads should ensure the emergence of increasingly diverse innovation in the near future.