Contemporary luxury design drawn using the palette that is Osaka 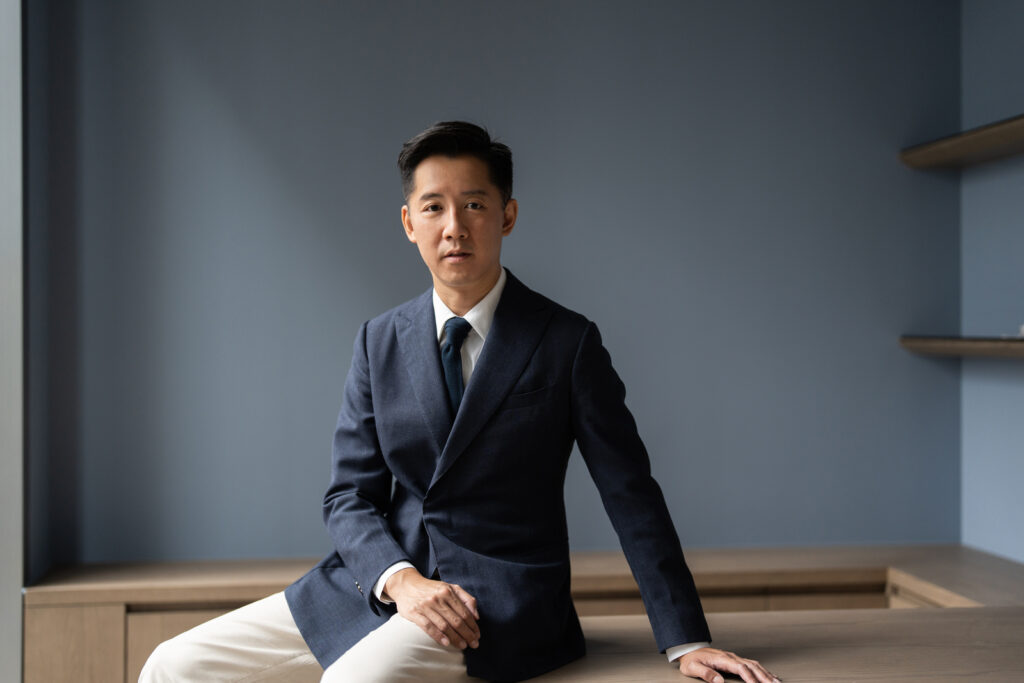 Part of the Umekita 2nd Project, the Waldorf Astoria Osaka is scheduled to open in 2025. Founded in New York in 1893, this legendary hotel that has welcomed many a celebrity will be reborn in Osaka. Involved in the hotel design on this occasion is André Fu, based in Hong Kong and active around the world. We asked for his thoughts on the project.

In 2009, André Fu drew worldwide attention for his design of the Hong Kong hotel The Upper House. Also having been involved in the design of numerous luxury hotels and restaurant spaces in Japan, he had the following to say about Osaka. “My first impression of Osaka was of a modern city overflowing with energy. Compared with Tokyo, which is a highly urbanized, ultimate cultural hub, and Kyoto, which embraces the heritage of Japan, I feel that Osaka is an extremely unique city. I’ve never seen such a dynamic city, with both a strong urban side and a traditional culture.”

André Fu was also involved in the design of the Waldorf Astoria Bangkok in 2018, yet for the new collaboration in Osaka he has crafted a new story. “Of course, I am eager to celebrate the sense of place specific to the context of Osaka in the design, but I also placed importance on the high level of comfort offered by Waldorf Astoria hotels all over the world. For the public spaces of the hotel, I have put in a tremendous amount of effort to evoke the sense of a unique journey of discovery. When guests arrive, alight from the car, and enter the hotel, they are greeted by a framed timber installation that houses a key, lacquered artwork in the center of the lobby. Subtle nods to the Art Deco heritage are showcased throughout. Once they are lifted to the 29th floor in the elevator, the doors open to reveal a vast, panoramic view of the cityscape, framed by a meticulously built pavilion. Then, walking down the arcade, which is a respectful nod to Waldorf Astoria New York, they arrive at the cylindrical, double-height reception, where a water feature is introduced. I designed it so that, as guests proceed step by step like this through the public space, they will feel like they are on a ‘journey.’ I am hoping that this hotel will be remembered forever as a first impression of Osaka, and become a landmark linked to the experience of travel that guests are about to have.”

Before the project started, Fu, on multiple visits to Osaka, was surprised to find that much Art Deco architecture remains in the city. “Buildings from the 1920s and ’30s like the Osaka Prefectural Government Office’s grand marble staircase, the Osaka Gas company building, and the Mengyo Kaikan Hall (Japan Cotton Industry Club) in Honmachi still exist today. Waldorf Astoria New York, too, is a hotel possessing a strong sense of Art Deco. I feel that the Art Deco aesthetic of the original Waldorf Astoria is a strong characteristic of the hotel’s heritage, and given the fact that this period of architecture is also interwoven into the context of the city, I want to reimagine a fresh approach to integrate the aesthetics of Art Deco as my inspirations, with Osaka’s unique color schemes and forms on my palette, when conjuring up a design specific to Waldorf Astoria Osaka.”

Fu sees the Art Deco architectural style as “delicate and bold,” and states that his own work “crosses cultures, in the sense that I have been entrusted with opportunities to design in a very different cultural context. My Asian roots and European upbringing have given me a vocabulary that perhaps speaks to multiple cultures and a design language that is able to capture a sense of place. Through the project, I have experienced a new side of Osaka that I had not discovered before, namely the city’s Art Deco heritage, which is still vivid. What is even more interesting is Frank Lloyd Wright’s Yodoko Guest House, an Art Deco-style house in the suburbs of Osaka, because it is more of a Western interpretation of Art Deco in the context of Osaka itself. So, as I designed this hotel, I asked myself how I get inspiration from all these contexts and reimagine them in the context of a hotel that belongs to our time and place.”

Fu has created luxury spaces in various countries in Asia, Europe, and elsewhere, but how does he define luxury in the present age? “I often use the expression ‘relaxed luxury.’ Rather than the formal, ornate luxury of the past, I think that a genuine and thoughtful environment defines luxury today – it is about immersing one in a space that is comfortable, true to oneself, and pure is more fitting for the present age. I would be delighted if guests of Waldorf Astoria Osaka could experience it as somewhere to escape the everyday, and experience relaxation in their own way in an almost secretive place.”

At the end of the interview, André Fu noted that he has reconsidered the significance of travel since the pandemic. “I had not traveled for two and a half years. And interestingly I have been traveling the past two weeks (as of June 15, 2022), and I have been to London, the French Riviera, Milan, and Bangkok. I see that a large part of the world has been fully revived in terms of being connected and to some sense that feeling of normality. So, I think, in the context of luxurious hospitality, travel is about giving the customers a true experience. The need for people to experience something first-hand on a personal level will always be a valid reason to hop on a plane. So, it’s important that these high-end hotels create something that is very intimate, very personal, and that truly celebrates the sense of place.” Waldorf Astoria Osaka will open a door to a new Osaka, one overflowing with charm.

André Fu
He is Asia’s most sought-after interior architect, celebrated for his captivating, original interiors. For the past decade and a half, Fu’s vision has been defined by a seamless alignment of cultural and design sensibilities, modern luxury, art, and craftsmanship.
A trained architect, his projects span scales and typologies, continuously bridging the gap between cultures, and drawing as naturally on European principles of beauty as from Oriental qualities, traditions, and modernity. His seemingly effortless creations range from an original furniture creation for Louis Vuitton’s exclusive Objets Nomades collection, contemporary art galleries in Hong Kong, Tokyo, and Shanghai, and major hotels and restaurants around the world, including Villa La Coste in Provence, The Berkeley London, Hong Kong’s St Regis Hotel, Hotel The Mitsui Kyoto, and The Upper House Hotel.
Fu’s personal design ethos is deeply rooted in his world of relaxed luxury and his ability to craft compelling settings that embrace and reflect harmony, beauty, and warmth, and which are imbued with understated sophistication.