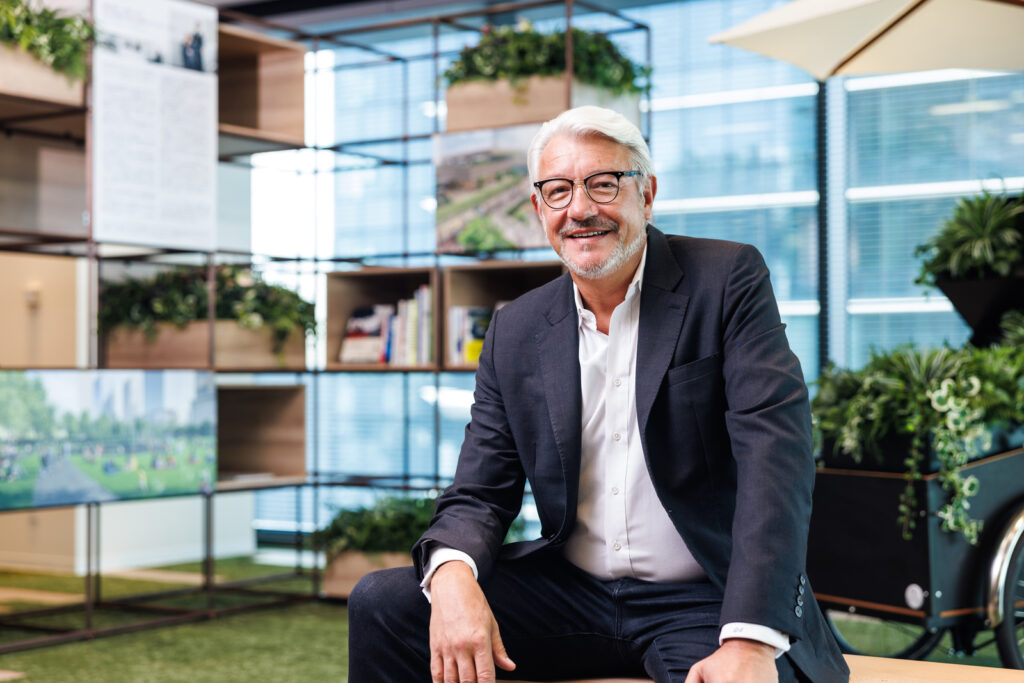 Time Out Group is a global and hospitality media brand that offers local city guides in 333 cities and 14 languages in 59 countries (as of July 2022). Time Out launched in 1968 and has a strong record of success—for example, it was the official travel guide for the 2012 London Olympic and Paralympic Games—and continues to expand through a variety of media, including its own website and social media accounts.

In 2014, Time Out launched a new business, Time Out Market, where visitors can enjoy culinary and cultural experiences curated by Time Out editors. After opening its first location in Lisbon, it has expanded across North America and the United States, including New York, Boston, Miami, Chicago and Montreal. In 2021, a Time Out Market opened in Dubai in the Middle East, and has become a popular spot for sampling the season’s best gourmet delights of that city. Now Time Out Market has chosen Osaka’s Umekita 2nd Project as the site for its first expansion into Asia. We spoke with Didier Souillat, Co-CEO of Time Out Market, to learn all about Time Out Market Osaka.

In the words of Souillat, “The mission of Time Out Market Osaka is to showcase the very best the city has to offer, including art, food, and drink. Time Out Market is a place where you can experience all this in a real setting. The concept is ‘The best of the city under one roof’ — the best local chefs, much-loved restaurateurs, drinks and cultural experiences—which means sharing a space and sharing experiences, all under a single roof. Some people will visit the Umekita 2nd Project for sightseeing, some for work, and some will be living there. We want to build a bridge to bring these various people together and create a site for new encounters.

When asked why he chose Osaka as the location for his first expansion into Asia, he replied, “Osaka is famous for the phrase kuidaore (meaning ‘eating one’s way to penury’). Think of takoyaki, okonomiyaki, kushikatsu (skewered pork cutlets), and more …” said Souillat, smiling, as he listed some of Osaka’s delicacies. “So it’s a gourmet city, but that’s only one reason. Osaka is Japan’s second-largest city, and it was the focal point of the nation’s unification in the 16th century. It has so much history and culture to offer. And the people of Osaka really enjoy eating and drinking, and having a good time going out. They really know how to enjoy life. I felt it was a great match with our DNA at Time Out.”

Beyond Osaka’s culture and atmosphere, the Osaka-Kansai World Expo to be held in 2025 also was a major factor in the decision.

“We launched Time Out Market Dubai at the same time as the 2021World Expo in Dubai, and it was hugely successful and continues to be. Umekita 2nd Project is in a fantastic location, and large numbers of overseas visitors are expected for the World Expo here in Osaka. However, Osaka is a huge city with countless restaurants, and first-time visitors to Osaka are often at a loss as to where to go. So we felt there was a need for a space to enjoy the best of Osaka cuisine in an easy way.”

Time Out Market Osaka will open in a 3,000-square-meter space inside the Umekita 2nd Project. Around fifteen carefully selected Kansai (Western Japan) restaurants and two bars are scheduled to open in this space

“We haven’t finalized the lineup of restaurants yet. Osaka is such a free-spirited city, and trends are always in flux. And it’s hard to predict what kind of gourmet trends Japan will see in 2025 and how trends in Osaka will shift. As we prepare for the opening of Time Out Market Osaka, we’re constantly keeping in touch with the media and with our editors, who have expert knowledge of the city and its gourmet culture, to select the very best restaurants. One thing we do stress is keeping it local. It’s important to us that our restaurants are not chain restaurants, but rather that they have their own independent styles and are outstanding in their own way. Michelin-starred chefs are welcome to take part in Time Out Market but we also want to make sure that the food is priced reasonably for our guests.”

He explains that Time Out Market also wants to foster the talents of the young chefs responsible for the food.

“Just as in any city, there are so many young chefs who have vision and talent, but who miss out on opportunities to succeed due to lack of funding. We want to find up-and-coming chefs in Osaka and help them to grow, as we’ve done with previous openings. In our own unique way, we want to provide these chefs with kitchen facilities and all the cooking equipment they need to get started right away.”

Food can be a tool to help us learn about a city’s culture, traditions, and customs through all five senses. By savoring the food there, we learn about the local culture and customs. Through food, communication is born and open innovation is created. In this international city that attracts a diversity of visitors from all over the world, Umekita 2nd Project will be somewhere visitors can enjoy food at Time Out Market Osaka and experience a new Osaka—one they have never known before.

Didier Souillat
Born in France, Didier Souillat is the Co-CEO of Time Out Market. Before joining Time Out, he was Executive Vice President of Hakkasan, a UK company that operates restaurants and clubs around the world, overseeing the company’s global restaurant portfolio. Prior to that, he held senior management positions at retail brands including Selfridges, Harrods, and Daylesford Organic. He has held his current position since February 22, 2016.