〈Part 1〉Two entrepreneurs whose paths crossed at Knowledge Capital and who are leading the way to future Osaka. 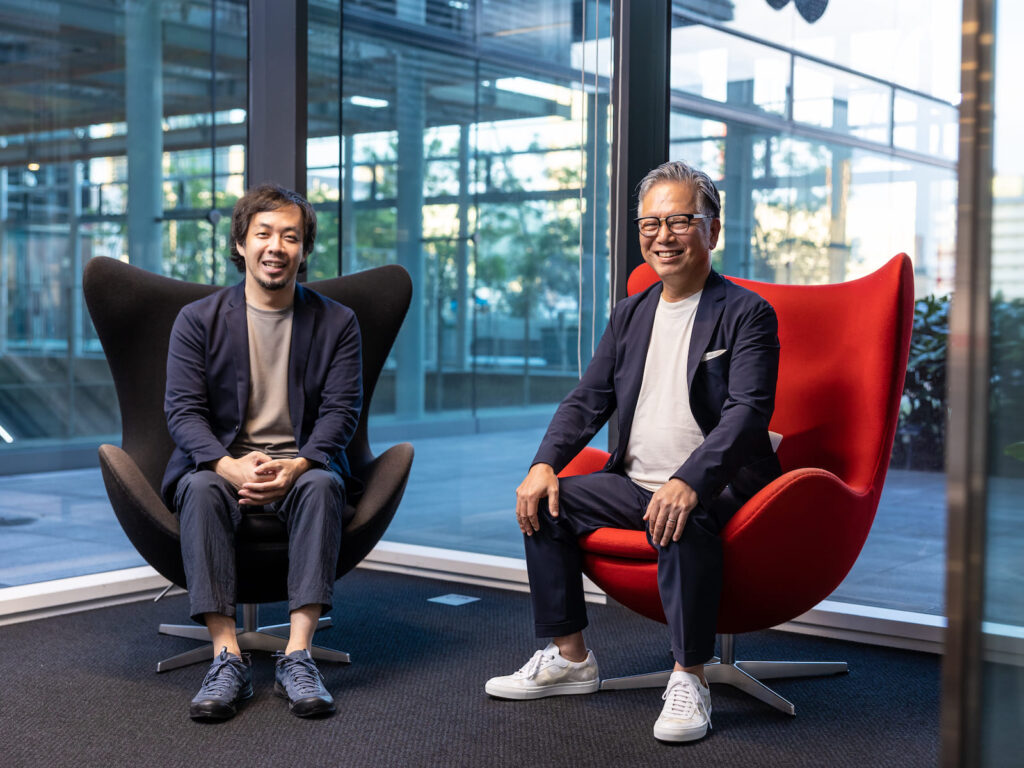 Knowledge Capital, a field for intellectual creation and exchange, and the core facility in Grand Front Osaka, opened in April 2013. Mr. Takuya Nomura is its General Producer responsible for the main “software” aspects, such as developing ideas and project operation, of this field for creating new value through the exchange of varied knowledge. Meanwhile, Mr. Takeshi Mori is the energetic CEO of Suprieve Holdings Co., Ltd., whose annual turnover has grown to 10 billion yen, and a member of the private Knowledge Salon, one of the main facilities of Knowledge Capital. They spoke about their careers to date and the role and future prospects of Knowledge Capital, now in its eighth year of operation.

After graduating from university, Mr. Takuya Nomura worked for 13 years in an advertising agency before going out on his own and founding Superstation Inc. in 1992.

He remembers: “The year 1992 was the dawn of the internet era, when Japan’s first internet service provider was established. I went to a lecture and was shocked to hear that the broadband network era, and the multimedia era, would soon be arriving, and that society would be completely and structurally transformed. That was when I thought of forming a video information service company that could respond to the changes that the world was undergoing.”

He named the company Superstation after Ted Turner’s Superstation, the forerunner of the US news channel CNN which he founded in Atlanta, Georgia, in 1980.

“A cable television company based in the small regional city of Atlanta became a globally renowned news channel. There was an element of hope that in the future our company would become that too, but as ‘super-station’ suggests, I wished to create a base where diverse human resources and rich sensibilities and contents could come together. At first, I started business by planning and producing television programs––the current media then, satellite TV programs that were just beginning to appear at the time, content for computer-mediated communication and experimental projects.

“There was a general outline for Knowledge Capital from the time of the original urban design   competition. It was my job to give practical shape to what kind of facility it would be, what concepts it would embody, and what services it would provide. One main facility is The Lab.: ‘The world’s best laboratory for everyone by everyone.’ It is a place where the fruits of the work of specialists from research organizations, universities, etc. are presented for the general public to see. The original idea for The Lab. came from the future-dealing rice transactions carried out at the Dojima Rice Exchange in Osaka during the Kyoho era (1716-1736), what is today called futures trading. The idea of futures trading, of buying and selling items not present in the now, emerged from Osaka. In fact, before Knowledge Capital was born, an event called the Osaka Creative Trading Floor, based on the same idea of trading actual cutting-edge technology and designs not yet commercialized, was held three times from 2009 through 2011 sponsored by the Kansai Bureau of Economy, Trade and Industry. That was the original form of The Lab.”

The founding concept of Knowledge Capital as an intellectual creation and exchange base, where diverse knowledge is gathered, is best embodied in the Knowledge Salon. Varied and diverse human resources intermingle in a well-equipped space that includes three types of areas­––lounge, workspace and project rooms (meeting rooms)––where fresh innovations are born on a regular basis.

“We took a hint from 17th-century Parisian salon culture in naming this a salon. It was because aristocrats and artists gathered there that French culture blossomed. Through exchange with people from different backgrounds, new things emerge that are the basis of innovation. In fact, in around 2002, ten years before the opening of Knowledge Capital, Professor Hideo Miyahara, Representative Director of Knowledge Capital (formerly President of Osaka University), and I presided over what was called the Nakanoshima Salon.” says Mr. Takuya Nomura.

One member of the Knowledge Salon is Mr. Takeshi Mori, CEO of Suprieve Holdings, the venture company attracting the most attention in Osaka right now. He has the unusual resume of having been an entertainer at the Yoshimoto Kogyo entertainment production company.

“I became an entertainer immediately after graduating from high school. Four years in, at the final of a ‘comedy tournament,’ when my partner and I came up against the comedy duo Yasei Bakudan, we lost overwhelmingly, 30-0. Even though we did the gags we were most confident about. It was a shock, and I retired. I then found a job at a large home appliance mass retailer selling personal computers. In my second month of working there, we were No. 1 for units sold, sales were the top by far for two months in a row, and in the third month I rose at a dizzying speed to acting manager of that branch (laughs). Though it really wasn’t that difficult. Usually you conduct sales one on one, but I would gather about 20 people together and sell four or five of them. After becoming acting manager, I taught my methods to the employees, and in the seventh month, sales at that store reached No. 1 nationwide, beating Ikebukuro and Shinjuku. Achieving such overwhelming results, I was burnt out (laughs). That’s enough, I thought, and quit to start my own company.”

Mr. Mori says work needs to have excitement (wakuwaku). He even gave the company he started in 2005 the name Wakuwaku Essa.

“When I was working at the home appliance retailer, unlike when I was an entertainer, there was no excitement. Thinking I wanted to do something interesting that would bring excitement, I phoned my comedy partner to say, ‘Let’s do something exciting together,’ and persuaded him to start a company with me. At first, I thought of Wakuwaku Co., Ltd., but then I thought it was also important to break into a sweat with an essa hoi sa (heave-ho).”

“As I had been a Yoshimoto entertainer, I had several hundred fans and acquaintances. At the time, the term ‘machikon’ still didn’t exist; they were called ‘coupling’ parties, which involved hiring some old meeting room, having sandwiches and drinks in paper cups, and leaving people to mingle by themselves. They were not fun events that women would want to go to. We hired a whole restaurant for four hours, arranged for full course meals with unlimited drinks, and held a party for 100 women and 100 men. On the first social media platform in Japan that was sweeping society then, our community had 200,000 people as registered users, the largest number in Japan. On Halloween, it was so popular that 2,500 people gathered and it was featured on television, but with the decline of that platform, we declined too,” he laughs.

Realizing that the machikon events were only on Saturdays and Sundays and they had Monday through Friday free, they started an online shopping business that used the procurement routes he had nurtured at the home appliance mass retailer, and began selling on leading online shopping malls at significantly lower price ranges than other companies, so that it achieved an annual turnover of one billion yen in the first year.

“We registered and sold products using drop shipping, without holding any goods in stock. We broke no Terms of Service rules and registered around ten million of all manner of products. But soon after we were warned not to sell things like nunchucks and laser pointers because they could be used as weapons and on and on. That being the case, we decided to use the knowhow we had gained from e-commerce sites to sell our own company products instead. If you research it, supplements and cosmetics are the two big genres in online shopping. That’s because they’re small, low-cost products that have repeat sales. Unlike furniture, which, once bought, is not bought again for several years; if a customer likes a shampoo, for example, they will repeat-buy it from us each month. So we decided to make the world’s most wonderful shampoo.” They developed shampoo from strictly selected organic ingredients, and with that product becoming an explosive hit, they steadily increased their own-brand products. Now they have reached five billion yen sales with just the product sales retail business.

Mr. Mori has grown his businesses in this way, one after the other. He originally established an office in Hirakata City; it was when he was searching anew for premises near Umeda that he came across the Knowledge Salon.

“If it’s business, Umeda’s the place to be: that’s the feeling of any venture company in Osaka. We found out about the Knowledge Salon when looking for a place for an office, and thought, ‘There’s a facility like this in a prime location in Umeda! But the monthly rent will be high….’ We were astounded when we heard that we could use all these facilities at such an exceptional rate.”

He immediately became a member of Knowledge Salon and, making full use of this intellectual creation and exchange base bringing together people from various professions––venture companies, researchers, creators, etc.––Mr. Mori saw his business soar further to an annual turnover of ten billion yen.

Takuya Nomura
Born in Osaka. After graduating from university, worked in an advertising agency, and then founded Superstation Inc. in 1992. Employed as General Producer at Grand Front Osaka’s Knowledge Capital in Umekita; was engaged in designing the overall concept of Umekita 2nd Project at the time of the original urban design competition; presently leads basic planning for the core function main facilities. Active over a wide range: visiting professor at Kansai University and Osaka University of Arts, strategic adviser for the Datability Consortium, judge at the French International Digital Art Biennial (Les Bains Numériques).