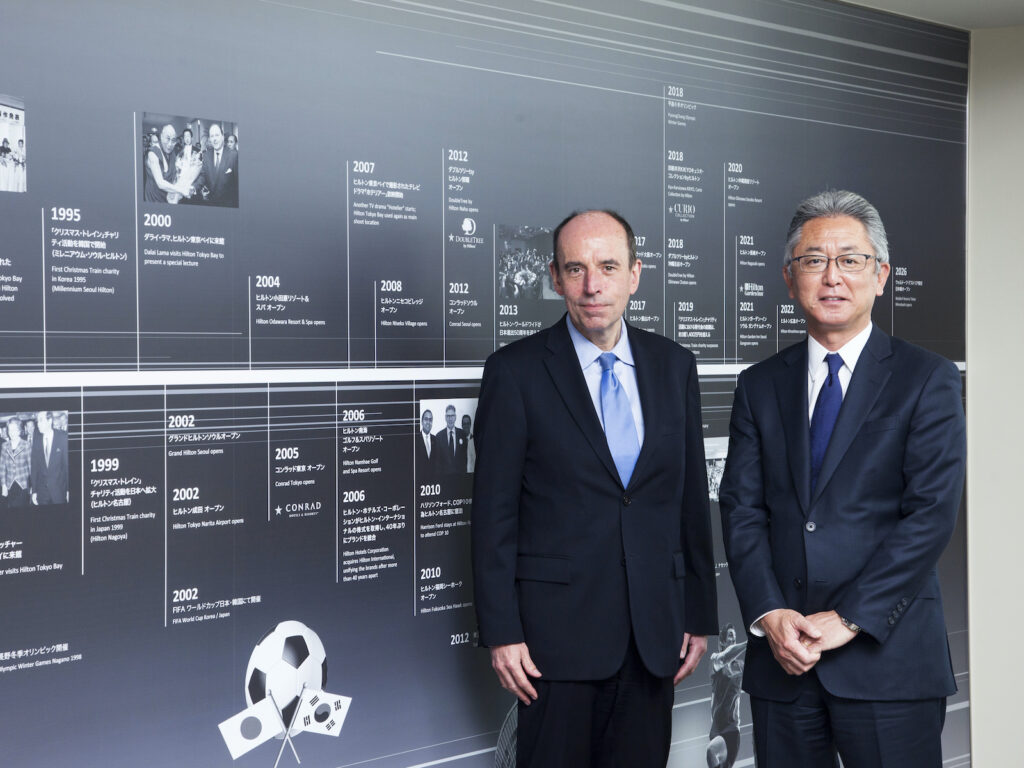 The global hospitality company, Hilton, is working in collaboration with the Umekita 2nd Project. Out of the 18 brands it boasts, there are now plans for a Waldorf Astoria, its luxury brand legendary in the hotel industry, and a Canopy by Hilton, its lifestyle brand. I spoke with Mr. Timothy Soper and Mr. Hirohisa Fujimoto, who are presently leading the launch of the new hotels in association with the Umekita 2nd Project.

Mr. Hirohisa Fujimoto talks about Waldorf Astoria, one of Hilton’s luxury brands: “Today, Japan has many splendid luxury hotels, but I am confident that the Waldorf Astoria will surpass them all. Waldorf Astoria has been synonymous with bringing together the social elite, world leaders, and captains of industry since it first opened its doors in New York City in 1893. Symbols telling of its history still remain today, such as Peacock Alley, a lounge and bar named after the peacock-like image of the dressed-up gentlemen and ladies walking the corridor, the Grand Staircase adorning the lobby, and the famous, free-standing Waldorf clock. We plan to make the hotel an icon of the Umekita 2nd Project too. Along with the long history embedded in the Waldorf Astoria brand, we promise you a truly luxurious stay, with a graceful and personalized service, culinary excellence, and an iconic environment throughout.”

Meanwhile, Canopy by Hilton, Hilton’s lifestyle brand, will be an upscale hotel fully attuned to the particular features of the Osaka townscape. “Canopy is a brand that Hilton created over many years by listening intently to what actual customers and owners were looking for. There are 32 Canopy properties around the world and 29 under development across 15 countries and territories. This brand is a place in the neighborhood to relax and recharge, offering simple guest-directed service, comfortable spaces and thoughtfully local choices. Each hotel is designed as a natural extension of its neighborhood and delivers a fresh approach to hospitality and the guest experience. Of course, we provide a sophisticated and comfortable space, but we can also communicate the history and culture of Osaka for those travelers seeking authentic and local experiences, and it can become a gathering place for social interactions for local people too.”

Mr. Timothy Soper talks about Hilton’s iconic brands in Osaka’s new development district, the Umekita 2nd Project. “Firstly, we focused on the historical story. From the Edo Period, Osaka was linked with various cities, and the exchange of people and commodities flourished due to the 53 post stations along the Tokaido Road. Having a base in Osaka, the heart of commerce from an historical perspective too, is a key point linking Waldorf Astoria around the world. Guests from Japan, as well as inbound guests, can stay in a trusted brand with easy access to the Kinki Region including popular tourist destinations like Kyoto.”

Mr. Timothy Soper says that luxury hotels themselves provide the story and become the symbol of a city. He is enthusiastic, saying that Waldorf Astoria’s history starts anew here, in its hub in the Umekita 2nd Project, both for those active internationally and for a diverse range of tourists looking for an exceptional travel experience.

Japan offers an array of accommodation facilities, from traditional ryokan inns, to resort hotels and large-scale international hotels. Mr. Hirohisa Fujimoto speaks about the significance of creating a new hotel in the present day.

“The fundamental role of a hotel is to provide a comfortable stay for its guests, but it is my belief that its role as storyteller within its specific environment is also important. The Umekita 2nd Project is a large-scale development encompassing 9.1 hectares (22.5 acres) in total, of which roughly half will be a green space, and it is our hope that this green area will become a base for conveying to others the Osaka culture. I myself come from Osaka, and have personally observed this area over the many years since Hilton Osaka opened in 1986, so I have an uncommon attachment to it. I want to communicate Osaka’s unique local culture and food culture and the many other aspects from this place. For that purpose, we are considering various means of organically connecting the large green space and the hotels.”

The pandemic, from 2020, has changed living styles around the world, and so in July 2020, Hilton launched an industry-defining standard of cleanliness and disinfection called “Hilton CleanStay.” “The cleaning of guest rooms, lobbies, and public spaces is carried out thoroughly with enhanced cleaning and disinfection protocols using hospital-grade cleaning products. With the goal of providing guests with assurance and peace of mind, this includes carefully sanitizing objects and areas that people frequently touch like guest room doorknobs and remote controls; seals are attached on the outside of guest room doors to mark that sterilization is complete and to make it clear at a glance that no one has entered a room before the guest arrives. Both check-in and check-out can be performed by smartphone, and it is possible for people, other than the speakers, to attend large-scale conferences remotely. We are devoted to providing meticulous service at all times, including during the pandemic. Also, as a global hotel it is our social responsibility to work toward sustainability.”

Mr. Timothy Soper says that he was astonished at the extremely personalized service he received at a ryokan he stayed in during his first visit to Japan in the 1990s. He wishes to preserve that heart of Japanese hospitality, even at the Waldorf Astoria with its planned 252 guest rooms. “You should be able to anticipate what service to provide to meet the needs of the guest. It cannot be called a luxury hotel just from appearance. The service provided too must be at the pinnacle.”

The two hotels to be born on the new ground of the Umekita 2nd Project will, while giving history and tradition a contemporary reinterpretation, help forge a path toward the future.

Timothy Soper
Area Vice President, Head of Japan, Korea and Micronesia, Hilton. From London, UK. Graduated from Kirklees College. After employment at several hotels in the UK, entered Hilton in 1988. With rich experience as a hotelier, engaged as general manager of several hotels in Japan and Korea while posted in the Asia Pacific region from 1992. Appointed vice president, operations for Greater China and Mongolia in 2007. Present position since October 2012.

Hirohisa Fujimoto
Vice President of Development Japan & Micronesia, Hilton. Entered Nissin Sugar Co. Ltd. in 1987. Engaged in the development of hotels and condominiums, in airport projects with overseas partners in Asia Pacific countries, and in the establishment and operation of the World Wildlife Fund and the El Nido Foundation. Later, after working at Soriano Aviation Inc., Amanpulo Resort, and Simplex Investment Advisors Inc., entered Hilton in 2009. Set up the Hilton brand in one location after another in Japan, including Fukuoka, Okinawa, Odaiba, and Osaka; promoted to senior executive manager of development Japan & Micronesia in 2016. Present position since 2020.