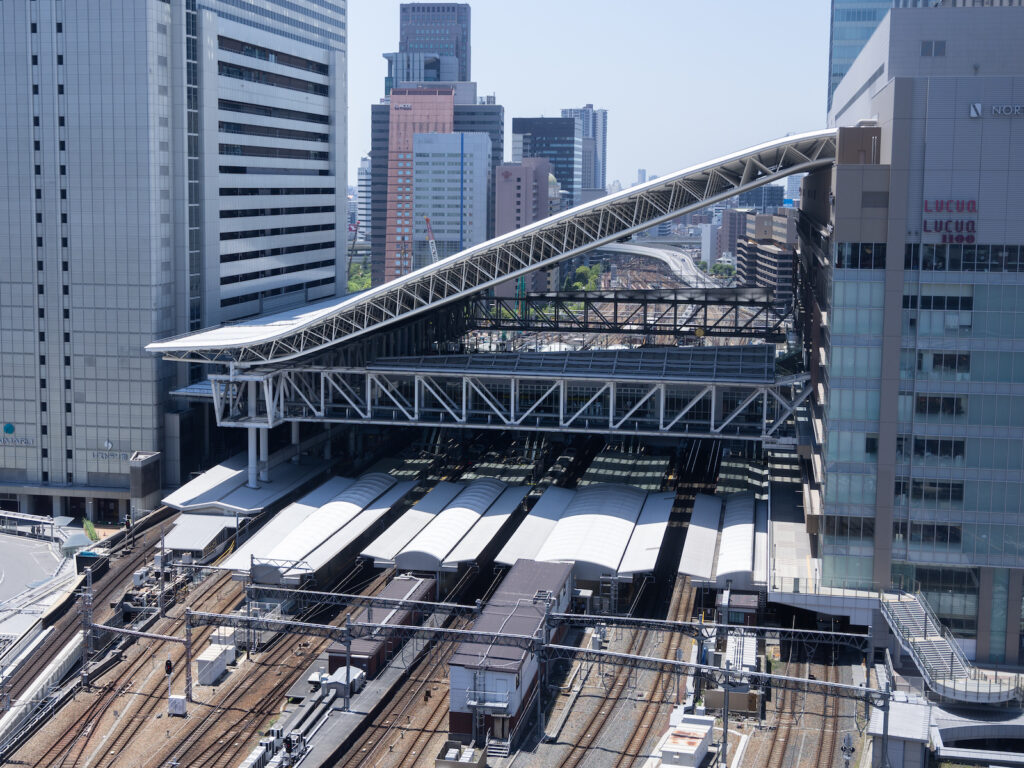 Umeda area of Osaka is the largest terminus in western Japan, handling around 2.5 million passengers a day. In fact, there are 7 stations for 13 service routes found here, including the JR Osaka Station, and those belonging to the Hankyu Corporation, Hanshin Electric Railway and Osaka Metro. The beginning of development of the area was the opening of Osaka Station in 1874 for the second government-owned railway (later known as Japan National Railways or JNR, which is the present-day JR) in Japan, which ran between Osaka and Kobe.

The early plans were to construct the station in the downtown area of Dojima. But protests in the surrounding area, and a proposal to extend the railway to the west of Kobe, led to the building of the original red brick, 2-story Osaka Station in the quiet rural landscape of Umeda on the outskirts of the city. There are various theories as to the origin of the name of Umeda, of which the reclamation of former wetlands, “umeta,” is particularly convincing. From the Edo Period, which started from 1603, fields of mustard flowers, which were harvested for the rapeseed oil used in lamps, stretched across this neighborhood. It is said that the famous Haiku poet Yosa Buson composed the Haiku poem, “Mustard flowers/ With the moon in the east/ And the sun in the west,” with the nearby landscape in mind.

In the Edo Period, goods from all over Japan were brought along a waterway network to Osaka, the economic center known as the “Nation’s Kitchen.” The waterways were still thriving early in the Meiji period (1868-1912) when the railways started to operate, and a canal was built to allow ships direct access to Osaka Station. The Tokaido Railway Line between Shimbashi and Kobe was started in 1889. Passenger and freight services were separated in 1928, with Umeda Freight Station beginning operation. The Osaka Passenger Station was then elevated, freight operation was moved to the northern side, and Osaka Station was further enlarged in each subsequent era.

The huge transportation hub around Osaka Station was developed into the largest commercial complex in western Japan, with Hankyu Corporation and Hanshin Electric Railway instrumental in its transformation into the gateway to Osaka. From 1897 to the early 1910s, the Hanshin Electric Railway between Osaka and Kobe, and the Minoo-Arima Electric Tramway (later Hankyu Corporation) from Umeda Station, started operation in rapid succession. In 1929, Hankyu Department Store (the present-day Umeda main store), the world’s first department store directly connected with a train station, was born. Later, Hanshin Mart, predecessor of the Hanshin Department Store, commenced operation as well. As a result, Umeda area started to bustle with people and develop rapidly.

“Hankyu Hanshin Holdings Group is proud to have built up the city and culture of Umeda by steadily providing the necessary urban facilities, such as department stores and building complexes, around the terminus where there had been nothing previously,” says Akihiko Taniguchi of the Hankyu Hanshin Properties Corporation. “Under a guiding principle of always providing something new, in 1969 the Hankyu Sanbangai Shopping Center was started, with the feature of an underground artificial river. Next, the 32-floor Hankyu Grand, the tallest building in Osaka at that time, was completed in 1977. This is also the first building complex in Japan with parking lots, offices, restaurants and clinics provided.”

During the postwar period of rapid growth, development of the Umeda area, with the opening of commercial facilities and creation of underground shopping arcades, was centered on the south side of Osaka Station. However, a major shift of direction to the north occurred at the privatization and breaking-up of Japanese National Railways in 1987. The site of the Umeda Freight Yard of around 24 hectares that lay on the north side of Osaka Station was designated to be an urban regeneration model district in order to drive Kansai which is internationally highly competitive into the future. Upon the request of Osaka City, the UR Agency in 2002 took on the task of coordinating the Industry-Government-Academia sectors to begin working this new urban development.

Kenta Shimamoto of the UR Agency, who has been involved since the initial stage of Umekita 1st project planning, looks back on the international competition regarding a new style of urban development for the future: “The Osaka Station North District International Competition in 2002 gathered 966 entries from 52 countries around the world, an unprecedented number. The proposal by an Argentinian, Mario Roberto Álvarez, was selected to receive first prize. The proposal suggested putting green at the center of the site and integrating the city into it, which very much resembles the present framework. And the proposal for the formation of an intellectual creativity hub or ‘Knowledge Core,’ from Keiichi Kobayashi of the Tohoku University of Art and Design, links to the notion of ‘Knowledge Capital,’ one of our fundamental tenets.”

Grand Front Osaka, the earlier Umekita redevelopment district, was opened in 2013. It has become a landmark welcoming 50 million visitors annually. However, as Kenta Shimamoto of the UR Agency notes, “On the south side of Osaka Station are extensive underground shopping arcades, and people have stopped walking aboveground there. We wanted Umekita to be a town for experiencing the sun and the green areas in the open air, not under the ground. So we created Umekita Plaza and the Grand Staircase in front of the station with the help of the architect Tadao Ando.”
Taniguchi adds, “It is a splendid urban planning. The only comparable example I can think of as a station plaza designed with people in mind is the SL Square at Shimbashi Station in Tokyo. This is western Japan’s biggest terminal which is on a much larger scale. I consider it a great breakthrough to have a spacious public square in front of the station where no cars can enter.”

Presently, development is progressing on the Umekita 2nd Project, with an advanced opening scheduled for 2024. In coordination with the district’s intellectual creativity space, Knowledge Capital, of the preceding development, the new town will be created as a base with midori (greenery) and innovation existing in harmony.
Shimamoto remarks, “Looking back in history, during the Taisho Period (1912-1926), this area appears to have been a school district where many educational institutions were gathered: Kitano Middle School, predecessor of Osaka Prefectural Kitano High School, and Baika Girls’ School (the present-day Baika Gakuen). In other words, there was a foundation there for ‘Knowledge Capital.’ It was also the land functioning as a hub, where commodities were brought from all over Japan. I feel that we have been given permission from the past to create a new hub that functions for a new time.”
“Umekita 2nd Project is centered around a park. I believe it is the first time in Japan that a park has been created from zero through a collaboration of the public and private sectors. Osaka was originally a city with little greenery. For that very reason, I think it can fulfil the role of conveying to the world the necessity of greenery and the full utilization of greenery in cities,” continues Taniguchi.

“The oldest city park in America, Boston Common, isn’t called a park, as the derivation of park is a place enclosed by a fence. In contrast, a commons means a place that everyone owns and shares. I also want Umekita 2nd Project urban park to be an open place loved by local people. We talk about ‘Urban development in the shape of the hiragana alphabet “no の”’: not just Umekita, but Chaya-machi, Umeda 1-chome, Nishi-umeda, Oyodo, Nakatsu and the Yodogawa river area too gradually unfold in the shape of の, and I hope it creates towns with multilayered texture and depth,” says Shimamoto.
With its park as the starting point, the new town “Umekita” will envelop the surrounding area, dispersing innovation in its spiral. A new chapter is about to begin in the history of Umeda.