Today, as in the Past, the “Suji” and “Tori” Streets Bring Life to the Townscape 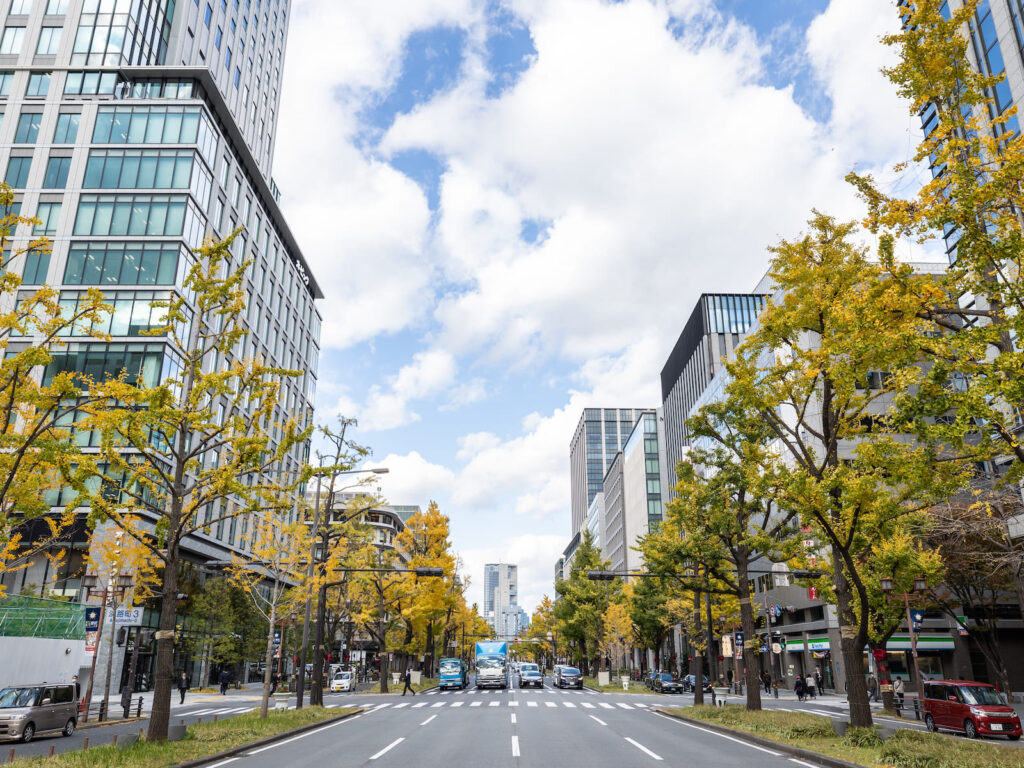 The basic layout of streets in Osaka dates from the era of the Imperial Regent Toyotomi Hideyoshi in the late sixteenth century, forming a regular grid pattern like the squares on a Go-board. In general, streets running north to south are called “suji,”and those east to west, “tori.” From olden times, each district has had its particular street that was the outward face of the area, one which people today still regard as their own.

The Tenjinbashi-suji Shopping Street, at a length of 2.6 km and spanning three stations­­–– the Minami-morimachi, Ogimachi and Tenjinbashi-suji 6-chome stations–– is the longest shopping street in Japan. The Tenma Produce Market is nearby, one of the three large markets in Osaka that symbolize its image as the nation’s kitchen. Tenjinbashi-suji flourished from the Edo Period (1603-1868) as the temple town of the Osaka Tenmangu Shrine, which is famous for its Tenjin Festival, one of the three great festivals in Japan. The shopping street is lined with around 600 stores, including a miso shop founded in the Edo Period, the shop which invented Battera sushi dating from the Meiji Period (1868-1912), cheap restaurants, a second-hand bookstore and a shop specializing in Konbu kelp. Next to the Osaka Tenmangu Shrine is the Tenma Tenjin Hanjotei, the only theater in the Kamigata comic story-telling tradition, which has been revived 60 years on from the war. During the Tenjin Festival, held July 24-25th every year, portable shrines wind their way through, and the area is full of the buzz from temporary stalls and other attractions.

Mido-suji is now the main street in Osaka, going north to south from Umeda to Nanba. The name Mido-suji, or “temple suji,” originates in its role as the road linking Kita-mido (Nishihongan-ji Tsumura Betsuin Temple) and Minami-mido (Higashihongan-ji Nanba Betsuin Temple). Once, the east-west road that continued to Osaka Castle was the main thoroughfare, and Mido-suji was narrow at just around 6 meters in breadth, yet it bustled with its rows of numerous wholesalers. In 1937, it was widened to around 44 meters to accommodate six-lane traffic, making it the main trunk road. The Osaka Metro Mido-suji Line runs below it and is loved by its citizens as the major route of the city’s subway system, boasting the highest number of passengers in Osaka.

A port known as Naniwazu in the Asuka Period (538-710) served as a trade hub for the continent and various places in Japan and developed into Osaka, the “city of water.” Through collaborative work between the public and private sectors, Nakanoshima Banks was opened in 2010, a project to create a lively space along the Dojima River with the aim of reviving the water city. This area close to the water is 400 meters in length and extends along the left bank of the Dojima River from Dojima Ohashi to the Tamae Bridge, lined with restaurant boats floating on the river and commercial facilities, as well as a regular riverside market.

The Umekita 2nd Project will have its advance opening in the summer of 2024. In the center of the newly born townscape, lying between its North District and South District, will be an urban park rich in greenery. Leading the South District development is Mr. Junji Kawabata of Mitsubishi Jisho Sekkei Inc., who was earlier involved in planning for the urban redevelopment and commercial complexes in the Otemachi, Marunouchi and Yurakucho districts of Tokyo (informally known as the Daimaruyu area).

“The major cities of the world, not just of Japan, necessarily have a main street through them. As with the Champs-Élysées in Paris, Orchard Road in Singapore, and La Rambla in Barcelona, the main street is loved by the people, and symbolizes that city as the first place that comes to mind when imagining it. For example, Marunouchi Naka-dori Avenue in which I was involved is the main street in the Marunouchi area, and development unfolded with it as the axis. In Osaka, too, there are various suji and tori which have contributed to Osaka’s economic development” says Mr. Junji Kawabata.

In particular, he cites the three suji and tori of the Tenjinbashi-suji Shopping Street, Mido-suji Avenue and Nakanoshima Banks as giving Osaka its special character.

“The Tenjinbashi-suji Shopping Street is a highly accessible arcade very much on a human scale, which has come to function as the kitchen of the people. However, Mido-suji Avenue is no doubt the street representative of Osaka, distinctive in its bustle as the main artery of Osaka connecting north and south. The town has also expanded east and west, as well as north and south. In addition, Nakanoshima Banks, symbolizing Osaka as the city of water, is a space opening onto the Dojima River that lets one really enjoy being by the water. In recent years, the areas along Osaka’s rivers, not only Nakanoshima Banks, have been greatly improved, giving me a surprise when I returned to Osaka from Tokyo. Although the scale and function of each differs, the suji and tori representing Osaka create charming urban spaces full of amplitude, vitality and diversity.”

There will also be an impressive street in the newly born townscape of the Umekita 2nd Project.

“The Umekita 2nd Project site was originally a switchyard, and so it is in the shape of a plant seed. The centerpiece will be the park with its waterside space and abundant greenery. The site has a distinctive layout, with the park in the middle linking the North and South Districts. For pedestrian traffic, a curved bridge has been created connecting north and south, and you can enjoy various views of the park while crossing it. Also, in the South District, a path cuts north to south between the buildings called the Valley Space, as if you are walking through a pass. Onto this, a pedestrian space crosses east to west on the basement, ground level and second floors, linking routes just as do the suji and tori. You can approach it from Osaka Station or New Station via the first or second floor, through a pedestrian space that is not flat, but multilayered and three-dimensional. As a city network, I think it is important that there is an easy approach with linkage on the second or basement floors.”

Furthermore, the layout of the buildings, not just of the street, makes for a new sort of approach, says Mr. Junji Kawabata.

“Another thing is that the buildings, too, have an axis, and when we designed them we called it the base line. In general, buildings squarely face the street, but here we instead positioned them like square cubes set at various angles. By doing that, a blank space and ‘gap’ emerges between the buildings, where we anticipate that people will gather or make free use of that space. If we increase the different angles of the buildings, we wonder if we can generate an urban scene with a diversity of expression throughout the transitions of time and season.”

In the same way that Osaka’s suji and tori have created the city’s unique history and scenery, the Umekita 2nd Project’s streets, too, will surely come to form the identity of this new townscape.