A new and futuristic transportation terminal with cutting-edge technology, the Umekita (Osaka) Underground Station will be completed in spring 2023. 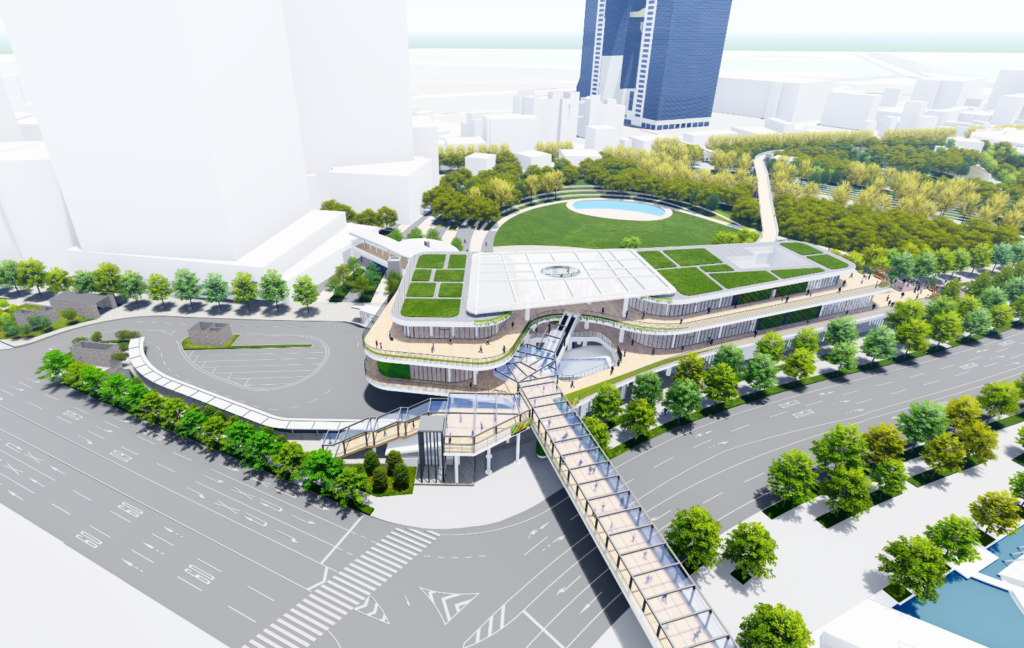 The JR Osaka Station is the busiest terminal in western Japan, serving over 845,000*passengers and seeing some 1,500 trains arrive and depart daily. Located on the north side of this transportation hub is the Umekita 2nd Project, an upcoming urban node with abundant greenery, which is scheduled for advance opening in summer 2024. The new Umekita (Osaka) Underground station in the development, however, will start operating earlier in spring 2023. Designed as a futuristic station incorporating JR West’s cutting-edge digital technology, and benefitting an international city fusing Midori (greenery) and Innovation.

Before introducing the new station further, let’s look back on the history of the Umekita 2nd Project redevelopment district where the station is being built. Mr. Yoshinobu Fujiwara from the Corporate Planning Headquarters of JR West, who is overseeing the underground construction work said the following.

“The Umekita 2nd Project redevelopment district originally housed the Umeda Freight Station, the largest distribution base in the Kansai region. The decision to relocate the freight station was made when the former Japanese National Railways was privatized and divided into the seven separate railway companies of the JR Group in 1987. The site was then set aside for future redevelopment. The Osaka Station North District Development Basic Plan was drawn up in 2004, and work started on moving the Branch Line of the Tokaido Line underground and on constructing the new station in November 2015. The freight station was actually moved away fairly recently, in 2013, and its functions were inherited by the Suita Freight Terminal and the Kudara Freight Terminal (Osaka City).”

The origin of the place-name Umeda is most likely “umeta” which refers to land reclaimed from wetlands. In the nineteenth century, a canal cut through present-day Umeda, allowing boats direct access to Osaka Station from the Dojima River. Working in such an area posed major difficulties for the civil engineering of an underground tunnel and building of a new station, and there are said to have been many hardships.

“Usually, the shield tunneling method is used to excavate a tunnel in a city center situation. This involves drilling a cylindrical excavator through the ground. The Umekita (Osaka) Underground Station’s construction, however, presents an extremely rare case where we had to excavate a tunnel by boring from above ground. This method was possible because of the large area of the site. Also, the soil, called Umeda clay, is soft and changes shape easily, so that we had to take great care, even when constructing the retaining wall to hold back the soil to dig the tunnel, that the walls did not bend. Furthermore, as we dug, we found traces of the canal that had been filled in after the war, and it was slow going digging out the huge concrete blocks. As of April 2022, however, about 80% of the station construction has been completed, so it should be opening next spring as scheduled.”

For the Umekita 2nd Project to compete on the international stage, airport access is essential, yet the Limited Express Haruka which goes to Kansai International Airport does not currently stop at Osaka Station. However, direct access will be possible when the new station opens, bringing a marked improvement in the railway network of the Kansai region.

“Access to the Limited Express Haruka at the new station means that the current 64 minutes it takes to go from Osaka Station to Kansai Airport Station will be shortened by 16 minutes to an average of 48 minutes by using the Limited Express Haruka from Osaka Station. And it’s not just access to the airport: it will enable use of the Limited Express Kuroshio traveling in the direction of Wakayama. It will make it easier to get to the Kumano Kodo pilgrimage routes that are especially popular among inbound European and American visitors, and enable use of the Osaka-Higashi Line. So access from the eastern part of Osaka will be improved, too” says Mr. Fujiwara, giving it his stamp of approval.

As the gateway to the Umekita 2nd Project, the Umekita (Osaka) Underground Station is positioned as a station of the future, taking on the challenge of realizing JR West’s technological vision as drawn up in 2018. This includes “JR West Labo,” an innovation experiment creating an interactive space through the use of digital technology.

“JR West Labo constitutes the base of innovation for our company. Expo 2025 Osaka, Kansai, will be held in this region and so we need to speed up innovation; it will act as a place for open innovation—not just for this company but for various businesses and groups—and as a communication base. One example of the cutting-edge technology scheduled to be installed in the new station are the full platform screen doors. They are a first-in-the-world trial; the new-style platform doors will move automatically like sliding doors to fit all train coach sizes and configurations. Also, the plan is to install one-to- one digital guidance giving a display tailored to an individual’s destination, as well as ticket gates—still at the trial stage—that use facial recognition. Furthermore, there are plans for
interactive space presentations with interactive images on a large screen. With the Expo 2025 Osaka, Kansai in mind, we hope to continue working with companies that are in sympathy with the ideas we want to realize in the new Umekita (Osaka) Station, and that we can co-create with.” The station, then, will enable users to experience new technology and new services.

Directly above the subterranean station will be a three-story station building and a square. Mr. Eisuke Sasaki from JR West’s Business Development Headquarters has been involved from the outset in the development of the North Gate Building which has a direct connection to the JR Osaka Station, and the planning of the Lucua Osaka retail space. He explained the composition of the new station building.

“The three-story, low-rise building will lie from north to south. On the second-floor level, a roughly 50-meter deck will run from JR Osaka Station to the new station building past the North Gate Building and Lucua. The new station building will mainly contain shops, and the path will give it accessibility. The outer rim will lead pedestrians to the park and various facilities of the Umekita 2nd Project district, and on the north side will be a route with steps down to the intersection.”

Most station buildings today have a closed-off feel, and you don’t sense changes in the outside environment. Here will be a new type of station building you have not seen before, where you can enjoy the view of the neighboring park—feeling the breeze and the green,” says Mr. Sasaki.

“Since there is a subterranean station directly below, it was already set that we would have a low-rise building. Also, the urban park is a very important element in the Umekita 2nd Project. There is a sense of borrowing its strength, sensing the green of the park, and being enveloped within its greenery. We are currently investigating merchandizing (store-planning) that can also give a contribution to those who come to enjoy the park, workers and local residents.” He says they are aiming for a station building integrated with greenery. “This urban development has an enormous green space right in front of Osaka Station, the likes of which are not seen elsewhere. We anticipate it becoming a trigger for an Osaka that will lead the way in the Kansai region. As railway operators, we are delighted that we can contribute to making the Umekita 2nd Project a place that people can visit conveniently, comfortably and without stress,” continues Mr. Fujiwara.

As a new station with the best of the latest technologies, the Umekita (Osaka) Underground Station will serve as the gateway to the Umekita 2nd Project. It will surely become a station to represent Osaka, and Japan, as a place not just for people to come and go, but also to experience innovation.