Towards urban development “loved by all” and accepting diversity. 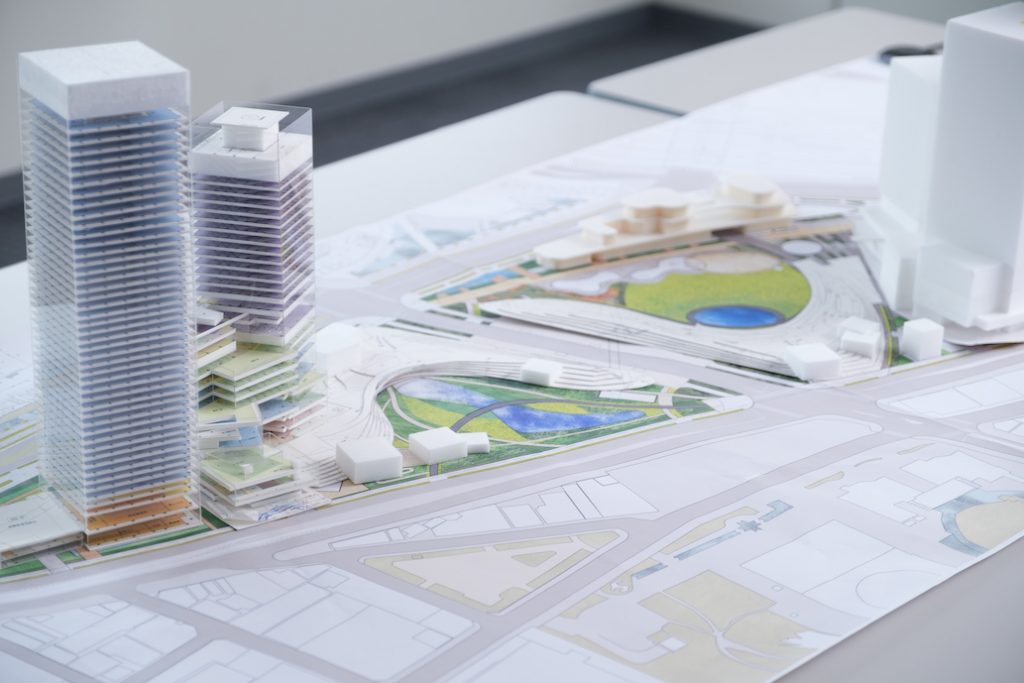 The Osaka Umeda area, one of the world’s greatest terminals. “Umekita” is the large-scale complex development project with the former Umeda cargo yard on the north side of JR Osaka Station at its heart. The earlier development district of Grand Front Osaka opened in 2013, while the next, “Umekita 2nd Project” is scheduled for advance opening in the summer of 2024. Of the approximately 91,000 square meters of the entire site, around half, approximately 45,000 square meters will be created into a park space abounding with greenery.

The theme of the urban development is a “base with ‘MIDORI (greenery)’ and ‘Innovation’ in harmony”. I asked three people overseeing its landscaping about what form it would take.
“There are several metropolitan parks in the world, such as New York Central Park, but a park in a super downtown location where offices and industry coexist with a place to relax – a park consistent with economic activity – is unprecedented worldwide. We hope to improve the quality of citizens’ lives as well as spur progress in Osaka’s industry, so we are aiming for “‘MIDORI (greenery)’ and ‘Innovation’ in harmony” linked to creativity in the future”, says Mr. Naoya Kuriyama of Hankyu Hanshin Properties Corp.

“Landscape” is the most important issue in the urban development of Umekita 2nd Project District.
Landscaping is a method of designing the whole town, from various standpoints such as people’s lives and activities, scenery and environment, not just design of the external area around structures.
“In Japan, awareness of landscape designers is low compared to that of architects; however, they think from the perspective of the grand design of the whole town, including its connection with the surroundings and the relationship between buildings and their external areas, not based purely on the structures such as high-rise buildings”, says Mr. Hisashi Murakami of Obayashi Corporation.
Overseeing the landscape design will be global landscape architecture company “GGN (Gustafson Guthrie Nichol)” that is based in Seattle, USA and represented by a trio of designers including Kathryn Gustafson. Despite Kathryn’s love of Japan, this Umekita project will be her first Japanese project. GGN will lead interpretation of the landscape from the history and climate of the town, and its land formation. Here, based on the history and climate in which Osaka once flourished as a water city with many rivers flowing through it, the plan is to create a landscape that gives a sense of the original Umekita ground and the seasons in Osaka.
“One reason we entrusted the project to GGN is that they have deep knowledge of Japan and also employ Japanese staff. We hope that their involvement in up-to-date overseas projects, and deep understanding of the culture of Japan and Japanese sentiment and subtlety, will enable them to combine all that knowledge in harmony”, says Mr. Murakami.

“Despite the location in the center of a large city, it considers the natural environment including wild birds and insects. The design aims for coexistence with indigenous nature, such as creating a water flow that makes it difficult for insects to breed rather than destroying them – even those considered pests like mosquitoes”, says Mr. Kazuhiro Sasaki of ORIX Real Estate.
So that many different people can use the park – walking visitors and local residents, nearby office workers etc. – spaces will be created enabling a range of activities, including Umekita-no-Mori where they can experience the seasons, Reflection Square that can accommodate 10,000 people, and relaxation areas with cafes etc. That will also be used as an innovative space to try out demonstrations of new services and ideas.

“Knowledge Capital is an intellectual collective base in the earlier development district of Grand Front Osaka. Furthermore, core facilities aimed at creating innovation that have been put in place in the 2nd project will combine with new parks, offices and hotels etc. with the intention of developing new activities in the future. Also, by taking advantage of the obliging and unreserved mentality typical of Osaka, we hope to create a town that actively accepts many different people regardless of nationality, gender or age. We believe that it is through diversity gathering that original ideas are born, so we are proposing new ways to use parks that will spread as a global standard”, says Mr. Sasaki. The unveiling of the whole picture is eagerly awaited.