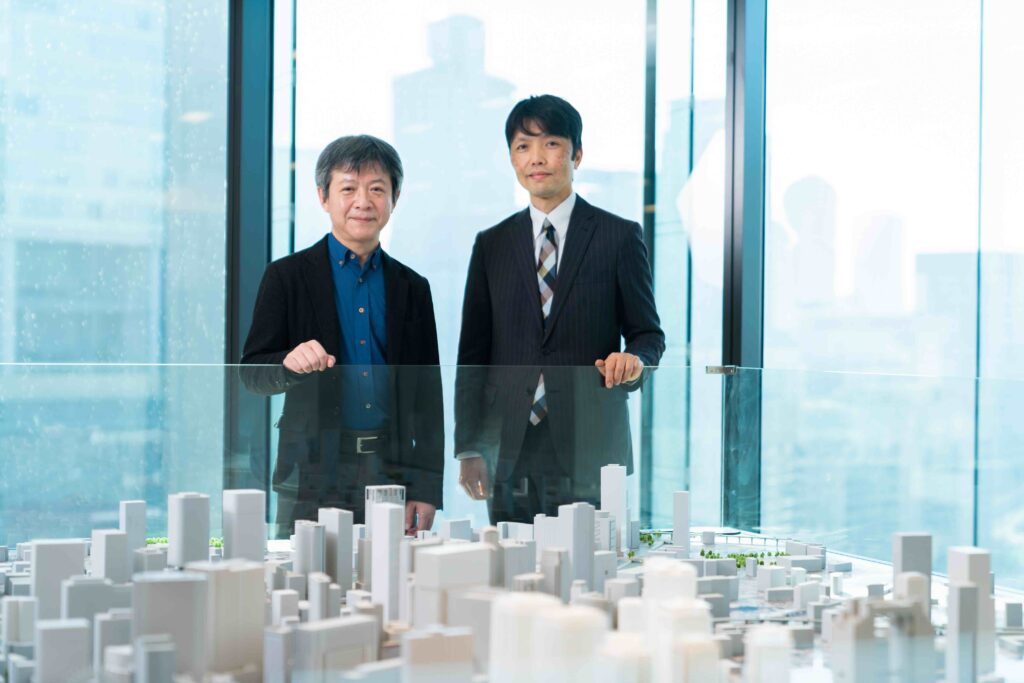 The Umekita 2nd Project, giving birth to a new town right in front of Osaka Station, terminal of many domestic lines. An architectural complex will be created that is at one with MIDORI (green), and equipped with various uses and functions such as offices, hotels, housing, core facilities and commercial facilities, with an urban park at its center. Based on the architectural concept of building a landscape, not buildings, Nikken Sekkei and Mitsubishi Jisho Sekkei who are undertaking the design of a town unseen before, both support the idea of Osaka-esque urban development maintaining the uniqueness of the area.

“The concept of ‘Design incorporating the Osaka original rich moist ground: land overflowing with life’ proposed by GGN was something that we greatly empathized with. Even in our approach to the architecture, we wanted to create an uplifting space where MIDORI (green) can really be sensed, rather than along the lines of erecting buildings next to a park. We took as our greatest theme the idea of ‘not Park Front, not Park View, but In the Park’, meaning building integrated architecture as if in the park itself, rather than merely looking out onto the park”, says Mr. Katsuyama of Nikken Sekkei.
“Umekita is comprised of numerous buildings, and by stacking square unit cubes at various angles, the theme becomes the diverse “spaces” emerging from those gaps and voids. Natural elements such as MIDORI (green), light and breeze encroach on those “spaces”, achieving an effect that will work to stimulate the five human senses. Also, by off-setting and overlapping the roof garden and pilotis to create a multi-layered effect, MIDORI (green) feels nearby even from high buildings. There are various other possibilities for linking park and architecture such as the idea of greening the actual walls of architecture, which will bring much value, I think. The notion of ‘In the Park’, I hope, will naturally forge a connection between architecture, people and MIDORI (green).”

Mr. Michiharu Yoneda of Mitsubishi Jisho Sekkei continues the discussion. “Among the sketches first submitted by GGN, there was a picture of something that looked like forest covering the whole of the site with green that I found intriguing. The idea is that wherever you go, you sense the presence of the park: so adopting ways that make you feel you are in the park, such as creating open-air spaces like a roof-top terrace facing the park, or ensuring a panorama of green can be seen even from inside the commercial facilities.” Although the use of materials evoking nature – not just MIDORI (green), but also stones, wood, glass – and the image of different strata, etc. give each building cube its own individuality, when clustered in a group they bring a sense of unity. The concept of “Building a landscape, not buildings” is unique too. “The North District and South District each endeavors to form its own distinctive space. The North District includes a design whereby a vertically-spiraling inner space is accessed through an atrium, while the South District commercial facilities, for example, have a line of various facades stretching 150m that gives the feeling of walking through a canyon. The whole site is thus captured in a landscape, where I visualize the overlaid spaces will provide people with places to meet etc., and inspire some activities to start up.

“We also wanted to give Umekita an Osaka-like essence. For example, the town of Osaka always had streets and passages that gave each area its identity, with names giving individuality to the area. In Umekita too, we plan to construct the “Symbol Axis” (tentative name) on Namboku-dori Street, which marks the boundary of Grand Front Osaka, with the impressive scene of an avenue of Gingko trees”, says Mr Katsuyama. The “Nigiwai Axis” (tentative name) linking Osaka Station with Umeda Sky Building, and cutting east to west across the center of the town, will also become an important street in Umekita 2nd Project. “A development in front of such a big terminal, laid out with a park at its center, can only be Umekita. Architecture evoking a sense of green and nature, spatial areas woven by the architectural complex, and with streets that will become the face of the town: they will bring uniqueness only found here,” says Mr. Yoneda. Expect great things from the new, unprecedented, urban development that could only be born from the freedom and energetic spirit of Osaka.