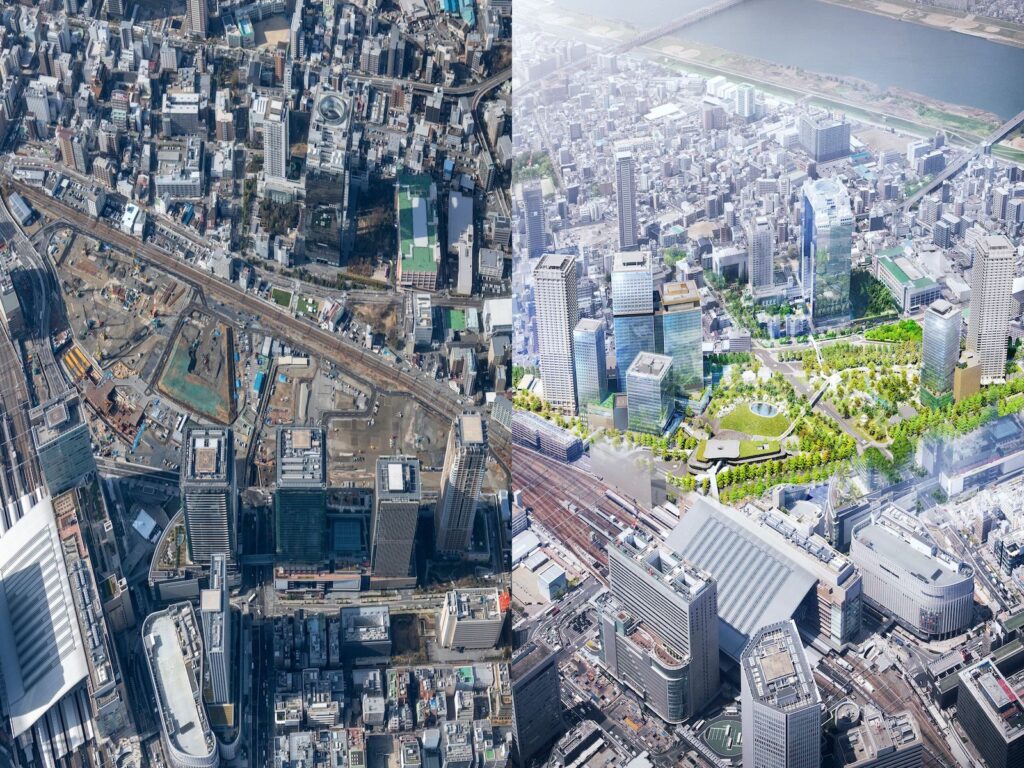 Since the forerunning development district Grand Front Osaka opened in Osaka, the UR Agency (Independent Administrative Institution Urban Renaissance Agency) has taken on the role of producer for the whole Umekita 2nd Project urban development: basic planning, infrastructure, coordination of civilian proposals, etc. With the theme of the urban development of a “base with MIDORI (greenery) and innovation in harmony”, the developers proceed aiming to achieve a new urban model to communicate to the world on matters such as environmental strategies and disaster prevention like “New normal/Next normal”, “Society5.0”, “SDGs”. Here they talk about Umekita 2nd Project’s urban development strategy.

“Grand Front Osaka opened in 2013 was a development that considerably changed the surrounding area of Osaka Station. Besides the attention-grabbing facilities such as shopping malls, high-grade offices and Knowledge Capital that is a base for intellectual creativity, more than anything, the flow of people greatly changed. There are aspects such as the flow lines that lead you, as if drawing you in, towards Grand Front Osaka the moment you alight at Osaka Station, and the creation of space like Umekita Plaza where anyone can gather with ease. These are, I believe, successful examples of those involved working as one on how to use space,” says Mr. Kazuhiro Yasuda of UR Agency.

In Umekita 2nd Project, a civilian competition was carried out to solicit proposals from a wide scope in order to select developers. Looking back upon then, Mr. Yasuda continues.
“The civilian competition proposals covered the whole project including the urban park and roads, not just site development. They ranged variedly and widely from aspects of the environment and disaster prevention, to design of public spaces and mechanisms for innovation. In particular, the idea of creating undulations in the park, located on flat land, can be described as the greatest exhibition of know-how, knowledge and wisdom from civilian enterprise. The proposals were full of ideas that would benefit Osaka’s continual growth as Japan’s No.2 city, not only the single development of Umekita 2nd Project district. They included points focusing on the history and climate of Osaka and collaboration with the surrounding area of neighboring Grand Front Osaka and Shin Umeda City.”

On the competition proposals, Mitsubishi Estate’s Mr. Masato Nakata talks about his initial impressions of the given theme of a “base with MIDORI (greenery) and innovation in harmony”.
“Umekita 2nd Project’s urban development strategy cites ‘MIDORI (greenery) that attracts all people of the world and provides matchless charm’. Yet the actual size of the Urban Park is approximately 4.5 hectares (11.1 acres), while New York Central Park is 341 hectares (842.6 acres), meaning, compared to parks abroad, we were starting with an area that was never large. I felt that the issues we needed to respond to in the competition were how to incorporate ‘MIDORI’ in urban space, and how best to bring out the charm of the urban park, not a case of the mere amount of green. As one answer, I thought we could treat the entire district as an expanse of ‘MIDORI’ open to the surrounding area. I also explored the debate deeper by using the stance of ‘MIDORI’ always as main, not buildings, and asked how architecture should appear within the expanse of ‘MIDORI’”.

“The ‘base with MIDORI (greenery) and innovation in harmony’ has largely taken place indoors so far. I felt that it was really rather difficult to transfer outside. Also, I think the way to go about utilizing public space is an immensely large theme. A road linking with Grand Front Osaka runs east to west cutting the park in two between North District and South District. How can we use and bring to life that road space? What you can do is limited under current legal restrictions, but we are looking into whether there is a possibility of installing, for example, terrace seating. That would achieve the function of people spending time there, not just the function of passing through,” continues Mr. Hidenobu Funahashi of Mitsubishi Estate.

Umekita 2nd Project, to be presented to the world as a new city model for future generations, is scheduled to actively introduce policies in consideration of the environment and the latest technology such as new energy, etc. Takenaka Corporation’s Mr. Kaiji Doki explains one example of this.
“A practical measure in consideration of the environment is firstly CO2 emissions reduction. The Ministry of the Environment has put forward an aim to reduce them 26% by 2030. Umekita 2nd Project, however, aims at reducing emissions by more, 35%, with plans to utilize various new technologies. One of these is a large-scale aquifer heat storage system that will be introduced for the first time in Japan. It is a system that involves digging a well 50-100m (164-328ft) deep underground. In summer, the underground water that is cooler than the outside temperature is drawn and used to provide cooling. The resulting waste heat is stored in an aquifer, and in winter it is used to provide heating, with the resulting waste cold returning to the aquifer once more. We also plan to introduce biogas power generation as already introduced in Abeno Harukas. This system changes biogas – drainage treated sludge and kitchen wastewater undergone methane fermentation – into usable energy”, so the plan is to lay self-sufficient energy infrastructure with a low environmental load. In addition, it is a place to take in evacuees from the surrounding area and those stranded at times of disaster, and will also function as an evacuation point for a wide area.

“A development of this scale taking place in front of Osaka Station will surely draw attention in the future from in Japan and from overseas. I think we have been asked for many things: Smart City, Super City, New Normal, etc. There is much expectation held by people already living or working in the surrounding area. We honor the honest connection with locals, and are working to create a town that will be loved by everyone of the region,” says Mr. Yasuda.
Umekita 2nd Project is set to present a new form of urban development for the coming generation, and to generate all the value of a city. There is no doubt that the new city, leading advancement in Osaka, will be a presence offering promise also to the surrounding region.

*GAFA: general term for the four leading US IT companies Google, Amazon, Facebook and Apple.