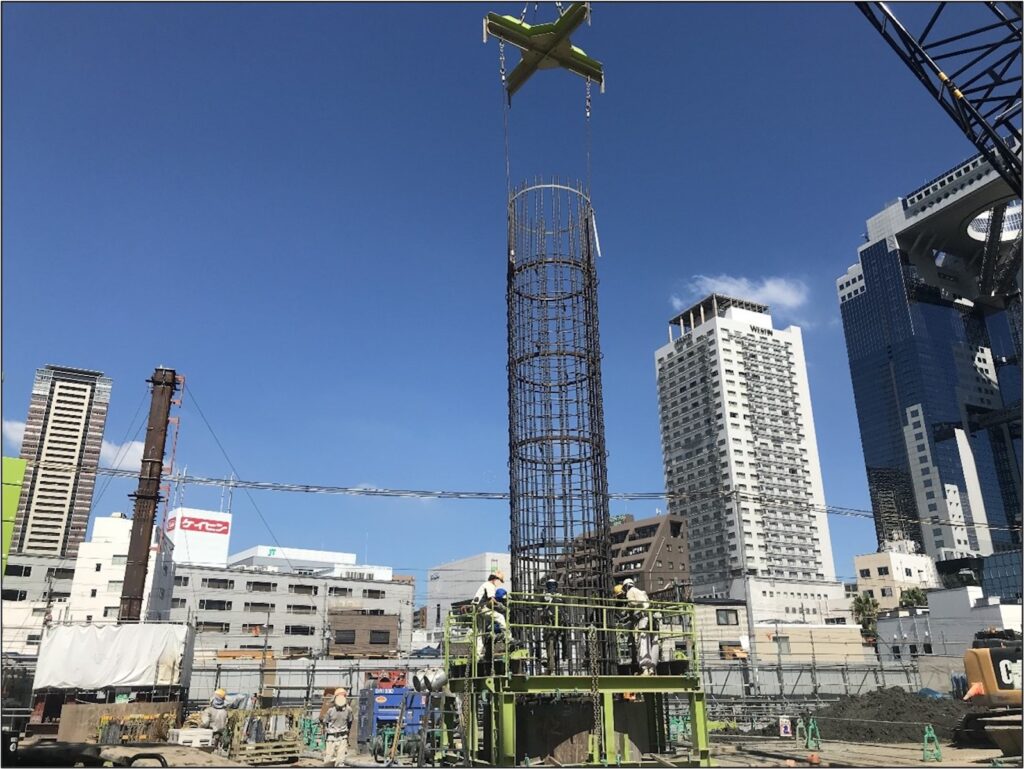 A new townscape is about to be born in the Umekita 2nd Project district, the last remaining prime site in central Osaka. With an urban park with abundant greenery at its center, clusters of high-rise buildings will soar up in the South District and the North District. Constructing the foundations and solid frameworks for these buildings are two major construction companies based in Osaka, the Takenaka Corporation and the Obayashi Corporation. Forming a joint venture (JV) to carry out the shared project, both companies have pooled their technology and knowhow to rise to the challenge of the largest-scale project in Osaka.

This is not the first time that the Takenaka Corporation and the Obayashi Corporation have worked in tandem. They also formed a joint venture to carry out construction of the earlier development district of Grand Front Osaka, known as the Umekita 1st Project, which opened in 2013.

“Both the Obayashi Corporation and we of the Takenaka Corporation are grounded in Osaka, are companies that you could say have been nurtured by Osaka. Both companies feel that the future of Osaka lies in the Umekita urban development and started the project with a heavy sense of responsibility,” reflects Mr. Kazuyoshi Goto of the Takenaka Corporation, who has been involved since the outset of the earlier redevelopment.

“The two companies worked together and shared many experiences on the Umekita 1st Project, offering up our own bits of expertise and overcoming various happenings. Since our accomplishments were well received and we are again engaged in the same kind of system, we hope to inherit that knowhow in the Umekita 2nd Project, too,” continues Mr. Shinji Nishikawa of the Obayashi Corporation, who also has been on board since the Umekita 1st Project.

Joint ventures formed by multiple companies are usually structured with one company leading in some capacity, but the Takenaka and Obayashi Corporations are continuing as in the Umekita 1st Project, and in the 2nd Project, too, have formed a fifty-fifty joint enterprise with completely equal standing. Mr. Isamu Oshima, Deputy Head of the General Office of Umekita 2nd Project Joint Enterprise, cites the merits of working jointly in construction work.

“One major reason is the ability to adopt the technology of both companies and their strengths. In technology, we can take advantage of Takenaka Corporation fortes, such as construction methods and patents, which Obayashi Corporation alone cannot provide, and likewise for the technological methods that we at Obayashi possess. The ability to work with each offering what they have is a big plus for efficient construction. In addition, there is a lot of construction underway at present in the Kansai region ahead of the Expo 2025 to be held in Osaka. For that, it is essential to bring together a multitude of workers and materials. But both the Takenaka and Obayashi corporations are based in Osaka and, by pooling their strengths, they are able to gather the human resources and materials necessary for this large-scale project.

Mr. Yoshihiko Kurita, Head of the General Office of the Umekita 2nd Project Joint Enterprise, explains the organization of the joint enterprise. “Organizationally, the General Office, which supervises roughly five construction districts, is under joint management, with the Takenaka Corporation and the Obayashi Corporation each providing half of the personnel. The South District has the Obayashi Corporation as its chief lead, while the North District, the Takenaka Corporation, so that each construction district has its own designated lead. Basically the districts have a mix of employees from the two companies with an equal number overall from each.”

Mr. Nishikawa further explains the founding and role of the General Office. “The two companies have their own business customs, as well as a differing IT infrastructure, so from the time of the Umekita 1st Project, there have been many discussions on how to organize the joint operations. We even investigated introducing a completely new system, but we concluded that the risks were too great and that it would be inefficient. The result was the decision to designate chief leads at the time of the 1st Project, and to put into place an organization, the General Office, for sharing information smoothly on communication, policymaking, and so forth. The General Office serves as a liaison to local government and the media, and coordinates multiple businesses and architectural firms. In fact, I was in the General Office for the 1st Project. I think we have moved smoothly since the start of the 2nd Project by making use of our experiences during the 1st Project.”

The South District Rental Building and North District Rental Building saw work begin in December 2020. So that the excavation could proceed safely without the nearby ground collapsing, earth retention work was carried out by constructing a wall stretching to a depth of 30-40 m underground. Piling installation, in order to support the buildings, involved excavating to a depth of 48 m, down to solid ground, and driving in multiple reinforced concrete piles 3.8 m in diameter. Both of these operations were completed in December 2021.

The South District Rental Building, which is being chiefly led by the Obayashi Corporation, stretches from 3 subbasements to 39 floors in height. Its upper floors will house a Waldorf Astoria, Hilton Hotels’ ultimate luxury brand, opening for the first time in the Kansai region.

“At present, excavation has begun, digging down roughly 20 m, and at the same time a steel framework is being erected aboveground. This is a special way of doing things called inverted construction, a method which involves first constructing the first floor, and then proceeding with the upper and lower floors simultaneously. It is a particularly sensitive spot, with tracks for the new  rail station running close by, and wide-range, deep digging will easily have an effect on the nearby area. We adopted it because it is the safest method of construction and lessens such risks,” says Mr. Kurita.

“Normally, retaining walls are a temporary measure for safe excavation, and they are not used in the body of the building. However, during the Umekita 1st Project, we carried out a full-scale experiment on location and, based on the results, incorporated the walls as a structural part of the main structure. Since that worked well, we have decided to incorporate the retaining walls in the Umekita 2nd Project, too. Underground construction work is known to be very difficult in Osaka compared with other areas: it has a high water level and there is also a large river. And there are other difficult conditions this time due to its being in a built-up area and sitting next to the railroad. However, both the Takenaka Corporation and the Obayashi Corporation have amassed considerable experience in underground construction in Osaka. By pooling that knowhow, we are confident we can safely carry out this construction,” says Mr. Nishikawa.

Mr. Goto of the Takenaka Corporation continues. “I was born and raised in Osaka, and also work for an Osaka-based company. But I’ve always regretted the fact that Osaka is less well-known internationally compared to Tokyo. Creating a new station in the new townscape of the Umekita 2nd Project will improve access to the Kansai International Airport and make it a city open to the world. We, too, are trying our hardest to transform the Osaka urban area into an important hub that can compete with any global city––and win.”

This new townscape is being created from technology and knowhow pooled through a collaboration between two leading Japanese companies, the Takenaka Corporation and the Obayashi Corporation. Together, they are working to create a bright future for Osaka.