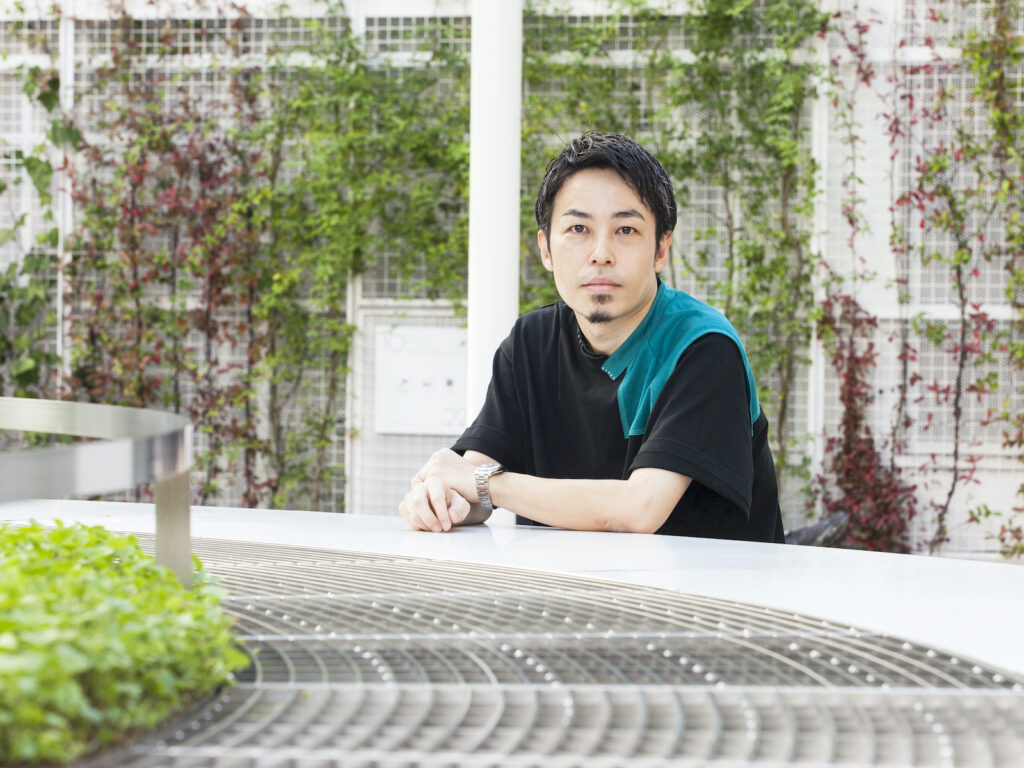 Mr. Chikara Ohno is a dynamic architect gathering attention for his wide range of designs, from regular housing to large-scale building complexes. In particular, he was involved from 2016 to 2020 in developing the JR Shinjuku Station New South Area’s Suica Penguin Park and NEWoMan Shopping Mall; the East Exit Station Square there dramatically transformed the flow of people through Shinjuku, a major transportation, shopping and entertainment hub. While never losing sight of the current situation of cities and society, he strives for designs for people to take “new steps.” Mr. Chikara Ohno gave us his thoughts on urban development.

Q. You have wide-ranging designs, from housing renovation to large-scale complexes. What made you interested in urban planning and design?

A. When I was in the upper years of elementary school, my father’s work took us to live in the state of Maryland. In Japan, my mother would set out every day to the local shopping street to buy the ingredients for that day’s dinner, but in the United States it is completely different: people go by car to the supermarket at the weekend to buy a week’s worth of groceries. In Japan I walked to elementary school, but in the United States children usually go by school bus, and we were living in a gated community so I had to traverse a gate to get in and out. Even though I was a child, I was startled by the difference in urban structures, and I realized that what I had previously thought of as the norm about a townscape was not something absolute.

Q. Was your choice to study urban design at university also influenced by your experience in the United States?

A. Well, I didn’t study hard at all as a student (laughs), and I was preoccupied in building a shop in the town of Kanazawa with buddies I got to know through snowboarding and music. I built a do-it-yourself small bar in a back-street building where young people had never congregated before. Then, around our bar, businesses aimed at young people started popping up, and the area became the latest thing. Creating a small economic environment from something we purely found fun, away from the academic world of urban system design and the like taught at university, was a truly inspirational experience.

Q. You started up your design office, sinato, in 2004 and it has flourished, working in over 300 projects in Japan and overseas. In 2016 you were in charge of designing the overall environment of the JR Shinjuku Station New South Area. What points were your main focus?

A. The New South Area of Shinjuku Station has seen construction work continue for over two decades, starting with the rebuilding of the overpass over the Koshu Kaido street. In its final stages, the development of the station-related facilities, they sought a unified design of the station building, square and commercial facilities; this needed to ensure safety and convenience while improving accessibility to the surrounding district. The vast space of more than 2,800 square meters stretching out in front of the New South Gate is a new transit and sitting area, created on artificial ground covering 16 tracks and eight platforms. It was important to turn this into an inviting place to spend time, to create a new station landscape. In a space on an urban scale such as this, merely arranging benches does not create a rich place to linger. Moreover, due to its position above rail tracks, safety is a priority and large structures cannot be used. So the creation of different levels and positioning of plantings have been used to make it more appealing. Elements such as a gently rising tiered platform, special seats for viewing the rail tracks, table seating partially hidden behind plantings, and cutaway step seats divide the space into segments so that visitors are free to choose a set-up to suit their numbers and mood.

Q. The use of surprisingly diverse plants is impressive. What do you think is the role of greenery in public spaces?

A. When we architects draw up a plan, we tend to consider plants from the physical aspect of form, sunshade, screen, etc. However, on this occasion, the planting team I am partnered with added a new narrative to that. For example, in areas for sitting facing each other and chatting which assume long stays, they wanted to plant aromatic herbs, and in more open places they have introduced an element of change with plants for experiencing the different seasons of the year. Plants are the antithesis of the inorganic and artificial things we build. They are varied and never have the same shape as another. They give off shoots in the spring, wither in the fall, and rustle in the wind. Living things bring a certain fluid energy to an environment. I feel that the influence exerted on space by “plant time,” which is something unplanned and uncontrolled, is invaluable.

Q. After your work on the JR Shinjuku Station New South Area, you also led the designing of the East Exit Station Square in 2020. What were the characteristics of this square in terms of its different scale and intended use?

A. This space to the east of Shinjuku Station originally took the form of a rotary, installed with things like smoke vents and air conditioning units for the underground shopping mall directly below. It was enclosed by a fence so that pedestrians could not enter, becoming an unsightly spot complained about by local residents for its discarded garbage, illegal bicycle parking, and so on. Also, it was on a smaller scale than the space in front of the New South Gate, and was like a big isolated area hemmed in by roads. I thought it would be good to make it into a sort of place for “touching down,” by making use of the site located right in the middle of the roads. In Shinjuku, with all its people, it is difficult to ease your walking pace or stop for a while. I thought how nice it would be to have somewhere along the street in front of the station where you could take a small break, meet up with someone, or quickly check your e-mails. It was then I proposed creating a large “street table,” which also functioned as a smoke vent, in the center of the square. Usually squares have benches only, without the provision of something like a table. With just benches, any behavior other than a momentary rest is unlikely to occur, but if there are tables, the purpose widens: people can do a bit of work or have a coffee.

Q. The huge artwork soaring above the middle of the table is also impressive.

A. One of the design conditions of JR East and the Lumine fashion shopping center which head up the project was to incorporate public art. I didn’t want to merely stick a piece of art somewhere, so I positioned a sculpture by Tomokazu Matsuyama rising up above the table for being viewed close up. People sitting there will notice many different expressions in the sculpture depending on position, time and weather. Even those who normally have no interest in art might spend time in this square and encounter this artwork, with the possibility of new urban experiences emerging from that.

Q. You were also involved in the improvement of the walkway between the JR Shinjuku Station New South Area’s NEWoMan shopping mall and the East Exit Station Square. How do you feel the flow of people has changed?

A. The walkway from the JR Shinjuku Station New South Area’s NEWoMan shopping mall to the East Exit Station Square was so narrow that people banged shoulders as they passed each other. So I widened the walkway to make it easier to walk along, and installed things like public furniture in front of NEWoMan. I also redesigned the plantings, bollards and lighting, not just the paving, so that it took on a bright atmosphere. The main purpose of a street is to “let people flow.” This is especially important for the streets around Shinjuku Station, which has the most passengers getting on and off in the world. When I was a child everyone shared the street in their own way: I would play by drawing pictures in chalk on the street, people from the houses there would line up potted plants outside their entrances, and greengrocers would pile up empty cardboard boxes. Later, activities other than transportation were eliminated from streets in Japan, but now, once more, I sense an increasing spirit to discover their value as new public places to linger in. In fact, things are beginning to change little by little, with, for example, a first-floor cafe in NEWoMan conducting something of a social experiment in the setting of some seating outside in the walkway.

Q. What are you hoping for in the Umekita 2nd Project?

A. The present time is an era of uncertainty. That has been underlined even further by the COVID-19 pandemic. In a major urban development like the Umekita 2nd Project, I consider blank space to be important. Rather than cramming up all the available space with hotels, offices, residences and commercial facilities, there should be places left open for considering the best uses in the future. It would be good to have places that can be nurtured through repeated trial and error, adding improvements each time. I hope the huge urban park too will be easily accessible for many people, with few restrictions on use, and in which local residents, people coming to use the facilities there and other people can mix freely.

Q. Finally, what do you pay particular attention to in your design work?

A. Our work is to draw the best possible lines on a sheet of blank paper within the parameters of the predetermined elements. With the lines chosen from among endless possibilities as the starting point, an actual building is built, green is nurtured and a landscape is born, and they become the scene for living. Just copying what has come before does not move us forward, while artwork that goes too far will not gain the support of a majority of the people. I am always searching for the lines that will send those who use that building or other finished work one step forward.

Chikara Ohno
Born in Osaka in 1976. A registered first-class architect. Studied urban design at the Department of Engineering, Kanazawa University. After graduating went freelance, and then founded sinato Inc. in 2004. Has designed projects of many different scales and intended use, in architecture, interior design, installation art, etc., in Japan and overseas. Has been involved in over 300 works to date, many of which have received awards in countries around the world. Also engaged as a part-time lecturer, Kyoto University of the Arts.